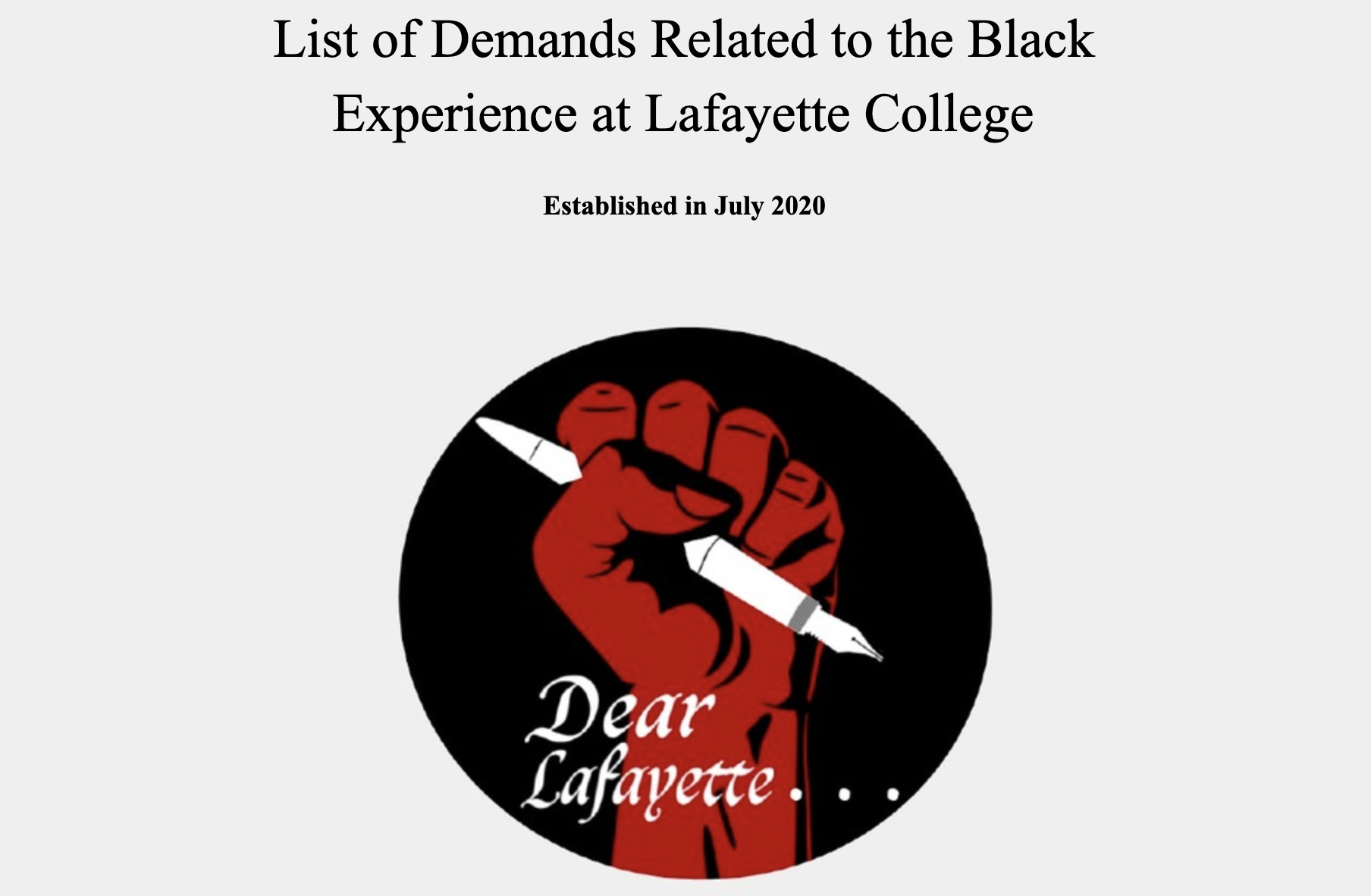 The Black-led student coalition Dear Lafayette created a 28-page document last October listing their demands for the college, ranging from a re-evaluation of the undergraduate curriculum to “no additional funding” for Public Safety.

The group, which according to its Instagram page @dearlafayettecollege dedicates itself to “fighting systemic oppression and fascism on College Hill,” made five demands pertaining specifically to Student Government.

“[Student Government] was very happy that Dear Lafayette brought this to our attention, so the Student Government as a whole can focus on these things and not just the equity and inclusion committee,” said Lidya Abebe ‘22, Director of the Equity and Inclusion Committee. “Since the demands have come out, we’ve been having conversations among the executive board but also in individual committees about the demands.”

The first of Dear Lafayette’s demands is that the Student Government Association consistently reach out to the BIPOC community on campus and ensure that campus representatives are from all racial backgrounds present in the student body, according to their “List of Demands Related to the Black Experience at Lafayette College.”

“If you’re working to ensure the well being of all students on campus, you can’t barely know that the Brothers of Lafayette, NIA: A Sisterhood, the Association of Black Collegians exist on campus. You’re not aware. You can’t answer the questions. You don’t know how the Black community feels,” Reanna West ’22, a member of Dear Lafayette, said. “The top priority [is] much stronger and more involvement with multicultural and Black organizations on campus.”

Abebe noted that Student Government felt like they were doing a lot of what Dear Lafayette had been asking.

“We [were] working with multicultural organizations on campus throughout the semester and when we did the racial justice fundraiser in the summer, we involved almost all multicultural organizations on campus. We’ve worked with QPOC (Queer People of Color) to celebrate Queer history month in October,” Abebe said. “Sherry Deng [‘22], the Director of Student Organizations, reached out to Dear Laf, asking what they can do for clubs and organizations to make those spaces more inclusive. We had been working on mandatory multicultural training for clubs and organizations, especially for the executives. We also made plans to attach that to requirements to get funding from student [government] and a table for the club fair.”

Dear Lafayette also demanded that current student government president Mary Zimmerman ’21 apologize and step down from her position by the start of the spring 2021 semester because of alleged “silence and racist views on the Black Lives Matter Movement,” according to the document.

Zimmerman declined to comment until a statement is released by Student Government, which at the time of this article had not occurred.

Jonathan Sosa-Ponce ‘21, treasurer of Student Government and director of the Budget Committee, emphasized that “[Student Government] is following the constitution and what mandates a motion for impeachment, not just for the President but for any director that is laid out in the rules.”

The coalitions other demands included that the Diversity, Equity, and Inclusion Committee under President Byerly work with the Student Government Associations’ Equity and Inclusion Committee, that a more extensive election process be used to determine “authentic campus representation,” and that voting student seats in Student Government are appointed to representatives from underrepresented communities.

“[Student Government] should’ve responded to the demands as an organization sooner,” Abebe said. “We want the students of color, Dear Lafayette, and those students who have concerns, we want to let them know that we’re advocating for them.”