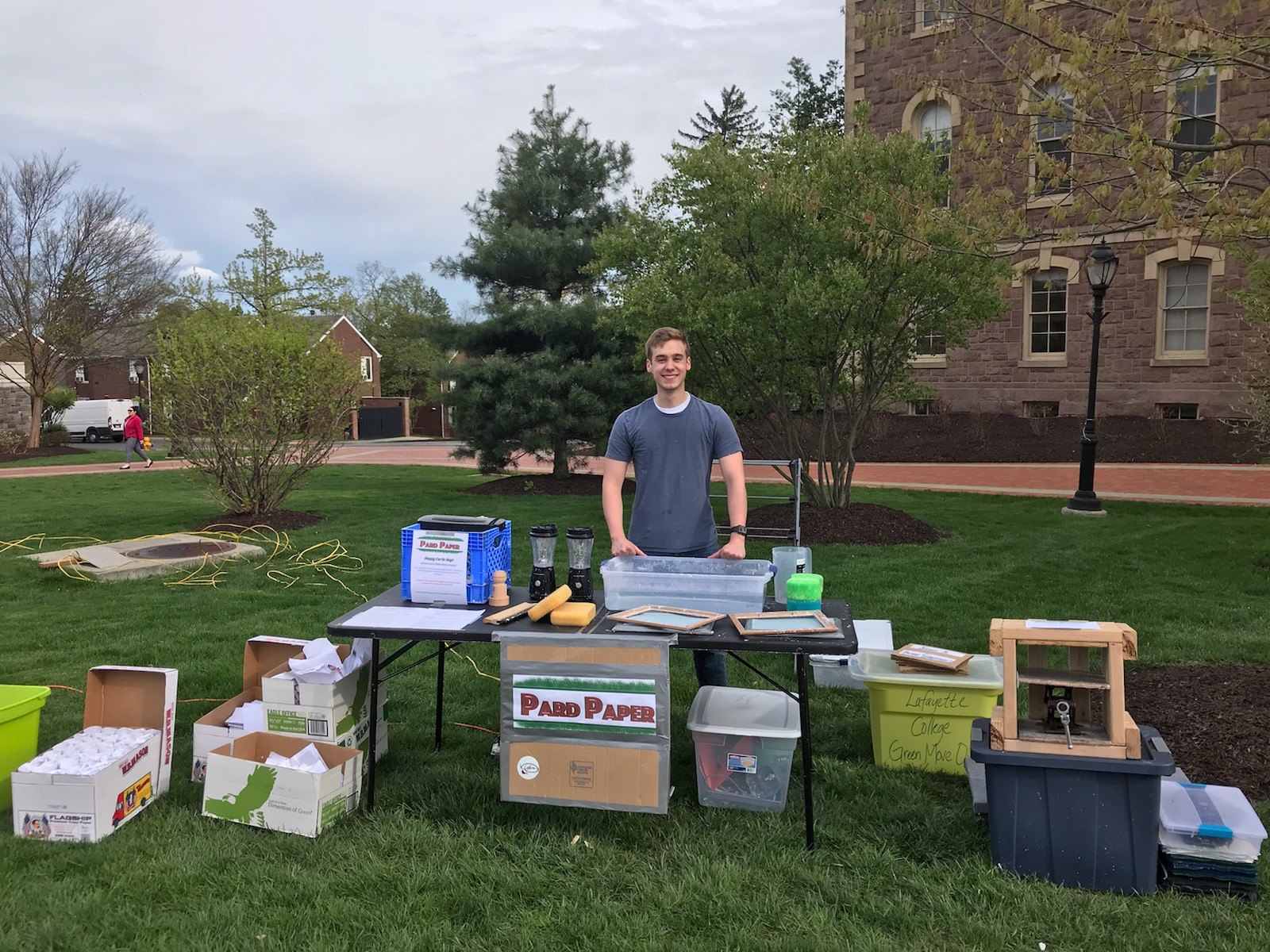 For Jake Hoffner ’20, papermaking is not only a long-time hobby but also a way to stay connected to his alma mater in a unique and sustainable way.

Hoffner began making paper back in high school while looking for DIY science projects to do at home. When he stumbled across papermaking, he found that it was a great opportunity to combine his passion for sustainability and for hands-on projects.

“I wanted to find potential in what people tend to see as waste and to make a resource out of it,” Hoffner explained.

After setting the activity aside for a while, Hoffner revisited it when he joined the Lafayette Environmental Awareness and Protection Club (LEAP). He began hosting papermaking workshops during Earth Week and sustainability month, and eventually he explored the idea of turning his hobby into a club.

“Papermaking is so different from other sustainability initiatives that I really wanted to pursue it,” Hoffner said.

After reaching out to Student Government, he began the process of starting an active club, which is now called PardPaper.

The club “essentially began in a janitor closet in Pardee Hall,” Hoffner said, where he would begin the papermaking process. For this, he had to construct a paper press as well as a modified drying rack so that the paper would be ready in time for workshops and events.

After the formation of his club, Hoffner said he knew he needed to find a clearly defined purpose in order to encourage membership, which was done by partnering with other sustainability-focused organizations at the college.

The necessary materials to make the paper come from the college, are repurposed by students and ultimately return to students in the form of paper products that are used for sustainability purposes. Teaming up with LaFarm, for example, has encouraged the making of seedling pods that can be sold for profit which is then donated to local sustainability charities. In turn, Lafayette students who take part in this initiative help the college reduce its carbon footprint, which aligns with the college’s sustainability plan to become carbon neutral by 2035.

Hoffner is still gathering supplies to make the club a success, especially due to COVID-related complications. He is currently working with the Dyer Center, Alpha Phi Omega and LEAP to send papermaking kits to students in order to spread the sustainability effort. One event, a virtual papermaking workshop, was held this past Tuesday.

“It’s a random topic, but it’s really fun and interesting to do,” Hoffner said.

For Hoffner, an interest in papermaking and its sustainable benefits has allowed him to forge a connection to the college, even after graduating.

“There are a lot of great personal memories I have of Lafayette, but my own personal connection is through the small impacts I was able to make while a student and even afterward.”