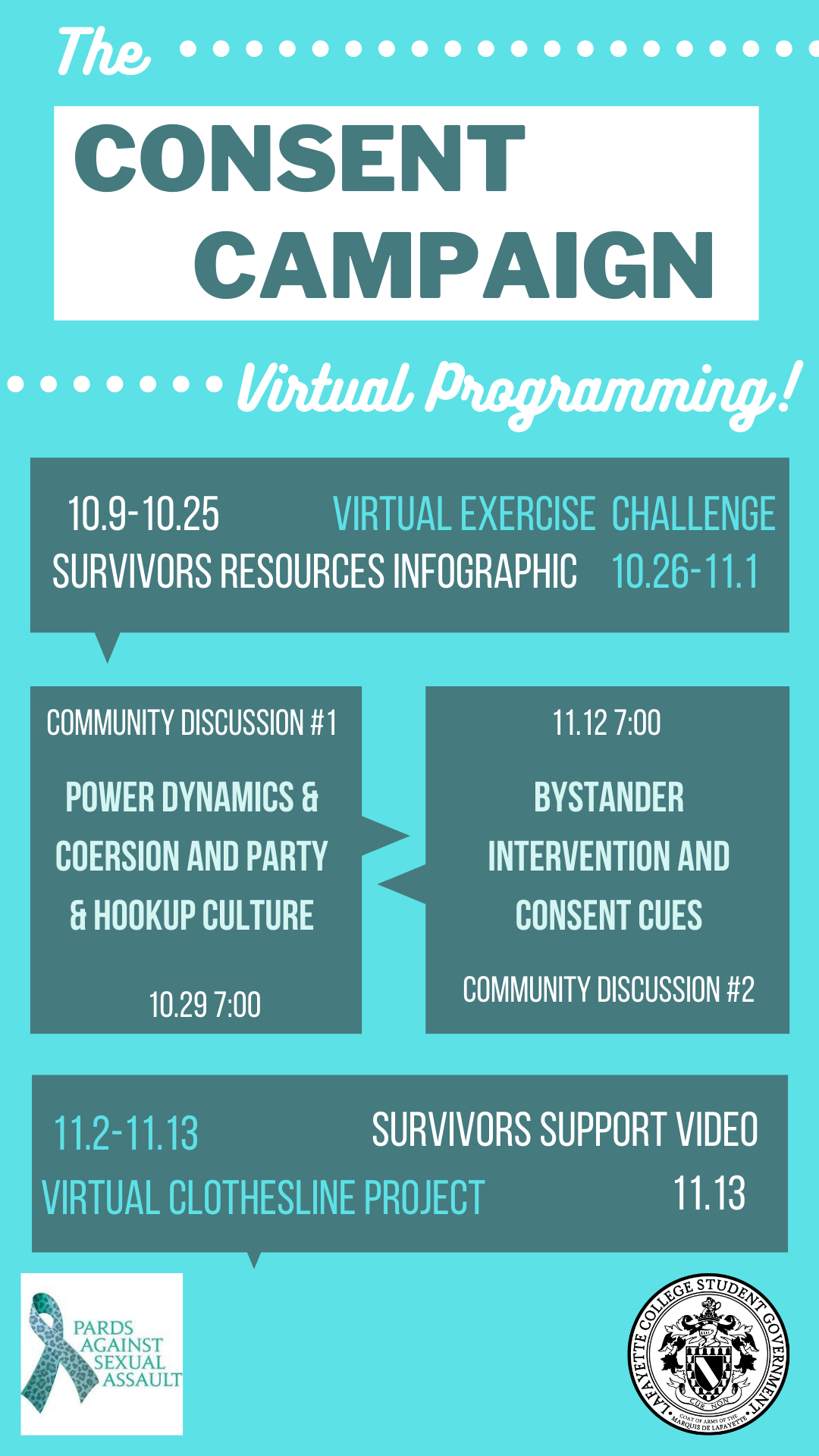 The second community discussion on November 12 will focus on bystander intervention and consent clues. (Photo courtesy of Pards Against Sexual Assault)

Sexual violence is pervasive across college campuses in the United States, and Lafayette College is no exception. Among undergraduate students, it is estimated that 26 percent of females and seven percent of males experience rape or other forms of sexual assault, according to the Rape, Abuse and Incest National Network. To address this, Student Government approached Pards Against Sexual Assault (PASA) this past summer to launch the Consent Campaign.

“The Consent Campaign is aimed around sparking or continuing discussion about sexual misconduct on college campuses, and specifically at Lafayette, so we can prepare our students better for handling it, for recognizing it, for doing something about it,” Greta Kullby ’21, an officer for PASA, said.

Student Government secretary Lia Charles ’22 spearheaded the initiative and trusted that PASA would be best suited to carry out its goals.

“Student Government’s role is supporting PASA in getting organizations to sign up,” Charles said. “We’ve also been disseminating information on our social media.”

Student Government and PASA have been working in tandem to engage as many students on campus as possible. The program is designed to have widespread impacts that extend beyond participating organizations.

“We are encouraging organizations to have internal discussions as a group and then come together every two weeks to have discussions with the broader Lafayette community,” Emma Piascik ’21, president of PASA, said. “That way those who are not participating in the campaign, or those who aren’t in any organization, such as freshmen, are able to participate.”

The Consent Campaign is a four-week program. The first week featured infographics posted on social media about resources offered on campus and in different regions of the country, as well as national and international resources.

“We did not want to leave anybody out when putting this together,” Kullby said.

In the second week, PASA partnered with the Resilience Project, an initiative created with the Counseling Center, to host a virtual exercise challenge based on the statistics of students who experience sexual violence.

Weeks three and four are based on the Clothesline Project, a program in which survivors are given an opportunity to share their stories anonymously on PASA’s Instagram account, @pasa_laf.

Despite successes in its first year, the Consent Campaign has not been without difficulties, especially from operating in a virtual format.

“There are challenges on how to best support a survivor, or somebody that is an ally in this situation,” Kullby said. “You’re not physically there and able to give that physical and emotional support.”

While acknowledging these shortcomings, officers of PASA found a silver lining when delivering their last community discussion remotely, which was attended by over 150 students.

“What was so cool about the community discussion was that you could see everybody, and anyone could chime in,” Piascik said. “It wasn’t a big auditorium where everyone is kind of anonymous. Everyone’s face was clearly visible and I think that created a more intimate setting and fostered deeper conversation,”

“We had almost 200 people at our community discussion and I think it was one of the coolest things I’ve ever seen and experienced being in PASA. Knowing that this event had an impact, or maybe someone took something away from it, is really amazing,” Kullby said. “There are advantages in this way, I don’t know if I would have seen that amount of people [under normal circumstances].”

Charles has also been pleased with the participation thus far, but sees room for improvement.

“I’m satisfied with the number of organizations signing on, but I would love to get more,” Charles said.

Piascik said she maintains a cautious optimism regarding the community’s progress, stating that Lafayette has a long way to go, but efforts like the Consent Campaign are crucial steps in making campus safer for everyone.