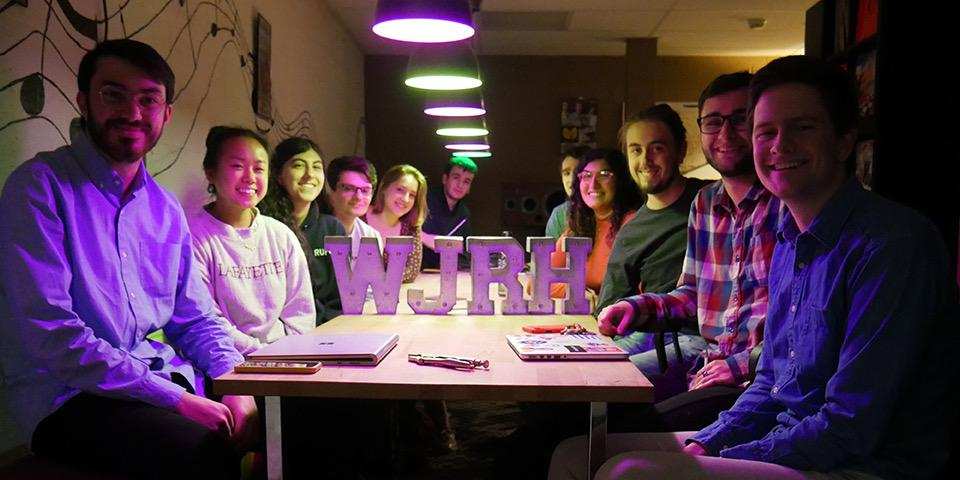 WJRH has utilized social media to get the word out about their radio shows remotely. Photo taken prior to March 2020. (Photo Courtesy of Calvin Sharp ’21)

Since 1947, WJRH has provided an outlet for Lafayette students to stream their favorite songs, hold events and run talk shows on a federally licensed FM station. While a virtual semester may not seem compatible for the station’s functioning, members have maintained their creative ideas and adapted their technology to remote services, allowing them to remain on the air-from afar.

Calvin Sharp ’21, general manager of WJRH, discussed the effects of the pandemic on the station’s operations.

“Normally, we broadcast from the studio in Hogg Hall…it’s been messy because we’ve been forced to move to third-party systems,” Sharp explained.

Teal Balloon is one of the the third-party systems that WJRH has utilized since they began streaming remotely earlier this month.

“Last semester, everyone was in the weird zone shock,” Sharp said. “This semester, board members are very excited.”

Sharp explained that WJRH was able to continue because it is broadcasted on the internet. Additionally, members of WJRH have stayed in touch and formed their own communities.

“Social media has been the main way word gets out,” Sharp added, referring, in part, to the organization’s Instagram page.

This semester, talk shows have been increasingly popular among WJRH DJs, according to Sharp.

For instance, Charlie Harper ’22, secretary of WJRH, has a talk show this semester with some friends which he described as “a lot of joking around” and discussion about what is happening on campus.

Harper has been using Open Broadcasting Software (OBS) and broadcast using another tool as streaming services for his show. He explained that he has also utilized social media and TikTok more than ever before.

According to Sharp, between 50 and 70 students are typically involved with WJRH including DJs, board members and engineers. The organization often works in tandem with other clubs on campus such as Pards Against Sexual Assault (PASA) and Lafayette Interdisciplinary Music Society (LIMS).

“It doesn’t matter how many people are listening in, it’s just something I enjoy doing,” Kasparian said.