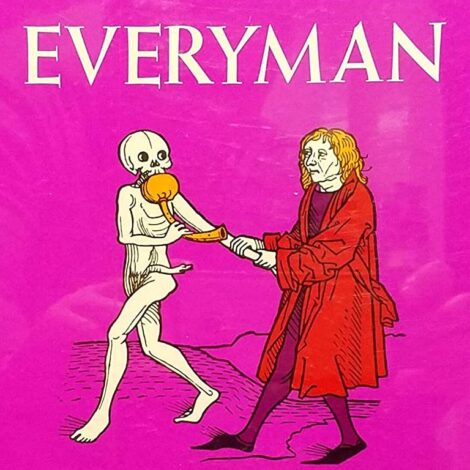 ‘The Summoning of Everyman’ was adapted and directed by Sarah Frankel ’21. (Photo courtesy of the Lafayette College Theater Department)

Lafayette’s first-ever virtual production is tailored to our time and our community. Directed and adapted by Sarah Frankel ’21, the Lafayette production of “The Summoning of Everyman” takes a 15th-century play about salvation and moral reckoning and makes the final stop before the “canyon of death” at the last place you would expect: College Hill.

Opening on a scene of Gabriel, whose halo is worn by Matthew White ’23, and God, portrayed as a bemused and out-of-touch mother by Maddy Proulx ’21, the audience is situated in a mauve-clouded heaven populated by the actors’ disembodied images. With actors only visible from the chest up, fading in and off the screen as the background changes radically, their avatars assume a strange and disorienting sense of artifice, echoing the play’s ultimate theme of mortality and impermanence.

The play is relentlessly self-aware and uses the assumed common knowledge of the Lafayette student body to present the world as we know it—but also make it completely alien to us. There are no rules for the digital set, and the play takes advantage of the potential for mutation and distortion.

Cattell Street, for example, becomes a grayed-out ghost of itself. The only color present in the static background image is the red of the Wawa logo and the portraits of the apparition-like figures who glitch across the screen, like a GIF of somebody walking. These scenes on College Hill slide easily between the realms of heaven and hell, presenting a vision of life on Earth as a fantasy somewhere between purgatory and wonderland.

The Lafayette student is specifically confronted not only through set, but in nearly every line of Frankel’s script.

At one point, the characters convene for a party, arranged across the screen in rows, like a Zoom class backgrounded by pixelated confetti, prompting one character to declare, “The volume in this bus is astronomical!”

The characters of Kindred and Cousin, played by Carlos Sanchez ’24 and Ethan Miller ’21 respectively, take on the personas of “Tri Beta Phi” fraternity brothers. The characters break the fourth wall and look at the audience knowingly against a cricket sound effect when one person declares, “Everyone knows the Greek system doesn’t have that many flaws…”

Goods, played by Lauren Stango ’22, is not just an abstraction of material wealth, but a loquacious vlogger with 7 billion subscribers.

Between the context of livestream, the disembodiment of the characters, the web of pop culture references and nods to the Lafayette-centeredness of the audience, the play comes to feel like watching the most elaborate, artistically meritorious TikTok ever produced.

For all its fun, though, the play is in essence a call to action and a shout into the void. The sense of artifice and its virtual nature actually serve its commentary on modern life incredibly well, parodying and reflecting an era in which our social structures are collapsing, our institutions are crumbling and many have had their entire world contract to just their home and their phone.

It is an effort to awaken us, because like Everyman and the COVID-19 pandemic and the consequent loss of hundreds of thousands of lives reminds us everyday, life is fleeting. Instead of settling for being “a generation of humans in a deep, collective, ignorant rut,” “Everyman” asks us to do better, to strengthen our relationships with Good Deeds (played by Kate Bettez ’23), so that we do not look back in regret.

It is, as the play’s final scene portends, “Ironic that hindsight is 2020”.