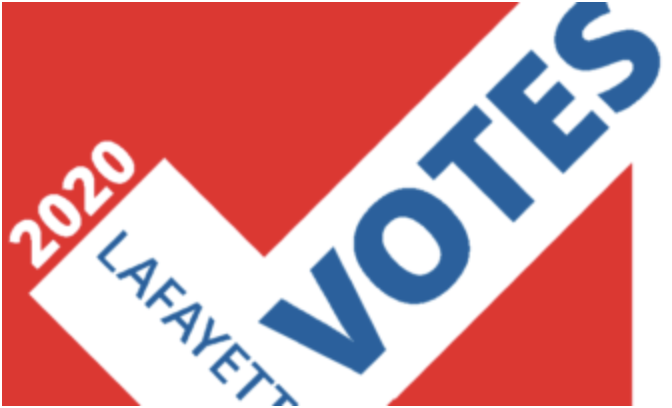 “Lafayette Votes!” is hosting a variety of events including watch parties for the Presidential Debates. (Photo Courtesy of Lafayette College)

Moderated by Fah Fair ’22 and led by Government and Law professor Andrew Clarke, Lafayette Votes is a coalition on campus consisting of students, faculty and staff from a wide range of departments and organizations that have come together to encourage Lafayette students to vote in upcoming elections.

“It became apparent at the beginning of the semester that other people on campus were thinking about voter registration as well,” said Chelsea Cefalu, a Landis staff member and Lafayette Votes coordinator. “We have doubled in size since… and are really working to get students out to the polls.”

One of the priorities of Lafayette Votes is education, so events such as the one on Wednesday are a crucial part of what they do, she said. There was a large discrepancy among Lafayette students in terms of how many were registered to vote for 2016, and how many actually did, Cefalu explained, which encouraged her to start Lafayette Votes.

The coalition is planning for over twenty more events on a wide variety of election-related topics, ranging from Supreme Court picks to how mail-in voting works today.

During the virtual event, Fair asked Clarke a variety of questions to shed light on voter mobilization today. One of the first issues brought up was how COVID- 19 changed the face of campaigning efforts for the general election.

“The traditional campaign playbook, door to door communication, is exactly what is not being advised in an emergency pandemic,” Clarke said. “This is why the last year has been pretty wild from a campaign strategy perspective, as most campaigns have these last few weeks as a final in-person push, which can’t happen this year.”

Another topic that was discussed was how college students specifically should try to mobilize their friends and family to vote.

“Of all the areas of research I have explored, one of the things that I like the most about the findings of mobilization studies is simply that social connections are extraordinarily important,” Clarke said. “Artificial means of mobilization are not nearly as effective as if I were to directly put some social pressure on my friends.”

Fair also touched on the topic of targeting certain demographics within mobilization and how that can lead to an uneven distribution of mobilization efforts depending on how the candidate predicts a citizen will vote.

“A campaign definitely looks at our propensity to vote, along with the likelihood you will vote the way they would like,” Clarke said. “Campaigns definitely think about blocks of voters in a strategic sense.”

When asked more about this topic of targeting certain groups, Clarke noted that although there is usually merit for some of these mobilization strategies, it does raise some moral debates.

“One argument that is worth noting is that such groups are not monoliths that vote the exact same way due to a certain demographic,” Clarke said. “There are some normative and ethical questions a campaign raises when targeting certain demographics in order to turn out voters.”

When the event closed with a question and answer session, one student asked Clarke to discuss the reliability of pre-election polling.

“Certainly pollsters are learning a lot about mistakes made in 2016 with certain groups being underrepresented that led to skews in the way we interpreted the polls,” Clarke said.

Clarke stressed the importance of educational events such as these and said that he was glad to be able to provide information to students.

“There were a couple of different topics floated. And this is just one that I’ve been thinking a lot about because as I kind of mentioned, mobilization out the vote efforts are the heart of most modern campaigns,” Clarke said in an interview. “But everything’s kind of scrambled in this COVID-19 world and it’s just an interesting topic to think through.”

Clarke also said he was glad that the Landis center was making these types of events accessible.

“It’s nice to have a nonpartisan kind of vehicle to learn this stuff, and a lot of ways for our students,” Clarke said. “I like this stuff because ultimately it’s about political power and sort of making a difference in your community.”

“I think the greatest part about the United States is the fact that it gives everybody the privilege to have their voice heard in politics,” said Ross Coleman ’22, vice president of Student Government and a member of Lafayette Votes. “And I think voting is the first step in terms of saying and helping to decide who our elected representatives are going to be.”

In terms of Student Government’s involvement with voter mobilization, Coleman noted that, while they would normally be doing much more in person, such as setting up booths outside of Skillman or Farinon, he is excited about the mobilization work they have been able to do online.

“’We’re working on a bunch of different infographics and just basically going crazy with sending them out to as many groups…and text chats,” he said.

Cefalu was happy at the event turnout in terms of both faculty and students participating.

“I think a lot of the additional interests we’re seeing in this comes from being disconnected from people and not feeling like a part of your community,” Cefalu said. “And so this is a way for people to re-engage with the communities that they feel like they’ve lost some touch with over the last seven months.”

She added that in the future she hopes to engage the Easton community more in these discussions and events. Cefalu also noted that any student, faculty or staff member can still get involved in Lafayette Votes if they want to.

Clarke echoed this statement and noted the importance of young voters in every election.

“Politics is not entertainment. It’s about the pursuit of power. And the fact that students are often overlooked by campaigns is because there’s this perception that they don’t vote, which is not meritless,” he said. “It means that there is a tremendous opportunity to increase the power of young American voters.”

Thank you for your article! I’m actually referencing it in my political participation course discussion board this week! Very well written!