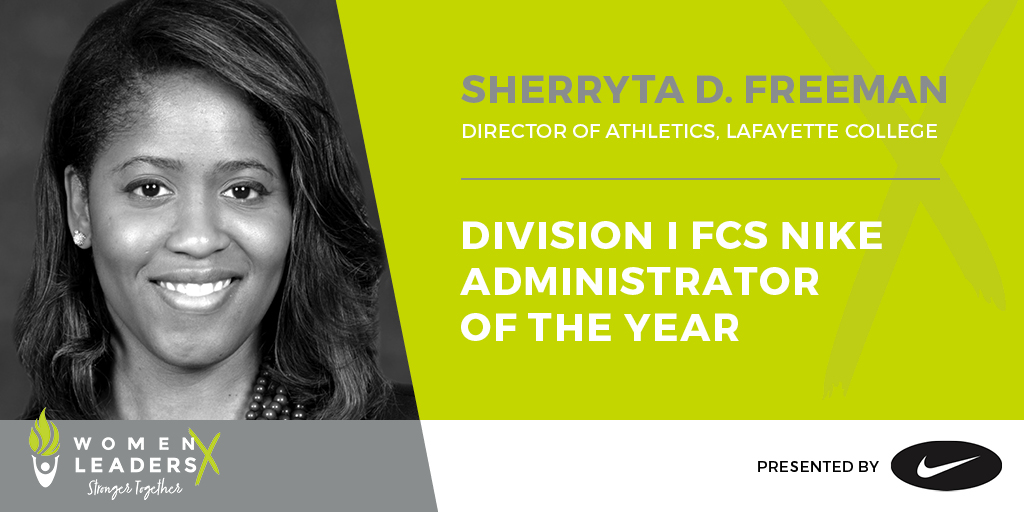 President Alison Byerly said Freeman is well respected not just at Lafayette but throughout the Patriot League as well. (Photo courtesy of Lafayette Communications)

After only three years as athletic director, Sherryta Freeman has been named Division I FCS Nike Administrator of the year, an award presented by the organization Women Leaders in College Sports for exemplifying commitment to intercollegiate athletics and for serving as a role model in her leadership position.

“It’s an honor for Lafayette first and foremost,” Freeman said. “The reason I was recognized is reflective of the work that the staff has done here.”

“Our coaches, the student athletes, and the positivity that has certainly been around our athletics program. So while it’s me specifically who received the award, I think it’s definitely reflective of everyone that I’ve worked with at Lafayette and previous institutions too.”

Before joining the Lafayette’s athletic staff, Freeman spent more than 15 years as an administrator at the institutions Temple University, Pennsylvania State University, and Dartmouth College. She served her first administrative position as the Assistant Athletic Director for Compliance at her alma mater, Dartmouth College, and received her master’s degree in Sports Management from the University of Massachusetts.

“The decision to work at the college level was definitely a desire to work with the young people. I believe 100% that athletics is a part of the educational mission of an institution. Athletics is a great way to teach many different skills and develop character, so for me I wanted to be a part of that development. I worked a large portion of my career in student development, and in compliance as well, so not only did I want to work with student athletes, but I wanted to work with them directly. And so I’m happy and proud that I’ve been able to do that,” she said.

Women Leaders in College Sports is a leadership organization that works to develop, connect, and advance women who are working in college sports by offering educational programs and other networking experiences and opportunities. Candidates for the administrator of the year award are typically nominated by an individual or group of people, and it was one of her former staff members at Temple who put everything together to submit to Women Leaders.

“I had no idea that I was nominated for the award,” Freeman said.

“I believe it was one day in early June that she called me to let me know that I not only was nominated but I was going to be a recipient of this award, and in that moment, I was definitely a little overwhelmed because I don’t work in this profession to be recognized by awards,” she said.

“I know about the awards, I’m present at the Women Leaders convention every single year and I see other people that are honored. It made me think about the impact that I had on her career that she felt compelled to do that, and that feels good and definitely makes me understand that when you pay attention to the development of others, it means a lot in terms of their progress and development and that’s special.”

“She really expects a lot of people that she works with and she has very high expectations, but she is so good about helping people get there,” said Annette Diorio, Vice President for Campus Life. “For me, she has been really committed to students’ success and our student-athletes being successful both on and off the field because that’s so huge.”

President Alison Byerly, who is currently the chair of the Council of Presidents for the Patriot League, said that Freeman is “seen as an important voice in a lot of conversations” and is “very well respected” by the other athletic directors.

“She combines being very personally empathetic…with being tough-minded and strategic in how she plans things,” Byerly said. “I think she’s got a good feel for the community…her good networking connections and understanding of the whole landscape of collegiate athletics is is also very helpful for college.”

“I remember when I first met her, we had a couple of hours together and I said ‘this is a woman who is definitely a rising star in the world of athletics’ and it is nice to be proven right. [She’s] phenomenal,” Diorio added.

Lafayette athletics have made strides in multiple areas under Freeman’s advising. Fall 2019 was considered Lafayette’s best fall athletic season in the past 25 years, experiencing a six-place jump in Patriot League Presidents Cup fall standings and finishing three teams in second place in the league.

During the 2019-2020 season, Lafayette’s academic achievement was spotlighted, ranking seventh in the nation in the NCAA Graduation Success Rate. Additionally, on the 2018-2019 season, 334 Leopards were placed on the Patriot League Academic Honor Roll.

During her time working in a male-dominated industry, Freeman has embodied the Women Leaders’ core values of leadership, equity, and empowerment of women working in the field of athletic administration. When she was hired, Freeman was one of only 18 women out of the 124 athletic directors at FCS institutions, and one of 54 of the 380 in the Division 1 conference.