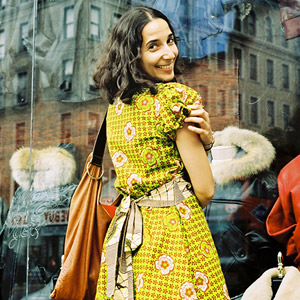 Emily Raboteau was inspired to write about climate change after visiting an art exhibit in New York City on the climate crisis’s effects on the city. (Photo courtesy of Emily Raboteau’s website)

For author Emily Raboteau, the climate crisis is urgent—and literary writers have a place in the fight against it.

This past Tuesday, Raboteau spoke to participants over Zoom and read an excerpt from her work as part of the fourth event in the Closs Virtual Reading Series.

Raboteau is an author and a professor of creative writing at the City College of New York. Her fiction and essays have been widely published in “Best American Short Stories,” “The New York Times” and “The Guardian.” Her creative nonfiction work, “Searching for Zion: The Quest for Home in the African Diaspora,” was a finalist for the Hurston Wright Legacy Award, grand prize winner of the New York Book Festival and winner of a 2014 American Book Award.

Raboteau began her talk by recounting a visit to a public art exhibit on climate change in New York City. The exhibit tasked New Yorkers with confronting the effects of the climate crisis upon the coastal city. This, she said, later became her inspiration behind writing about and being an activist against climate change.

“Even though more than 72% of Americans are very concerned about climate change, very few of us talk about it regularly,” Raboteau said. “The reason why it’s important that we talk about it, and writers write about it, is that the more politicians understand what their constituent’s real concerns are the more that policy might actually change.”

After her talk, Raboteau opened the floor to questions. She also asked the audience to share personal experiences regarding the subject.

One participant told the group about a climate clock in New York that is counting down the number of days until “it’s too late to save Earth from climate disaster,” according to The Washington Post. Currently, it reads 7 years and 100 days.

The participant then asked about the interactions between images, art and writing.

Art has a special way to communicate urgency that other mediums often lack, Raboteau said. As an example, she referred to climate signs in New York, which she said felt “alarming but important to witness and confront.”

Another participant explained that involvement with a topic on a micro-level creates the strongest impact for her, so she asked how Raboteau developed an intimate connection with a macro-level problem such as climate change.

In response, Raboteau said that a lot of people are drawn into personal stories about climate change. In fact, in her own essay following her visit to the climate signs, she approached the topic from a parent’s perspective, relaying the challenges of discussing the difficult topic with her children and the concerns that she has regarding their future.

A combination of micro and macro level engagement with a subject has “the power to be impactful writing,” she said.

In a follow-up email after the event, Raboteau told The Lafayette that her motivation to write about the climate crisis stems, in part, from seeing young activists, such as those in the Sunrise Movement and Fridays for Future.

“I’ve incorporated climate writing into my curriculum as a professor of creative writing so that the subject is central. The climate emergency is the most urgent subject of our time,” Raboteau wrote.

Raboteau’s two upcoming works include a novel entitled “Endurance,” which is about a building superintendent in Washington Heights and a nonfiction work, “Caution,” focused on the topic of climate change.