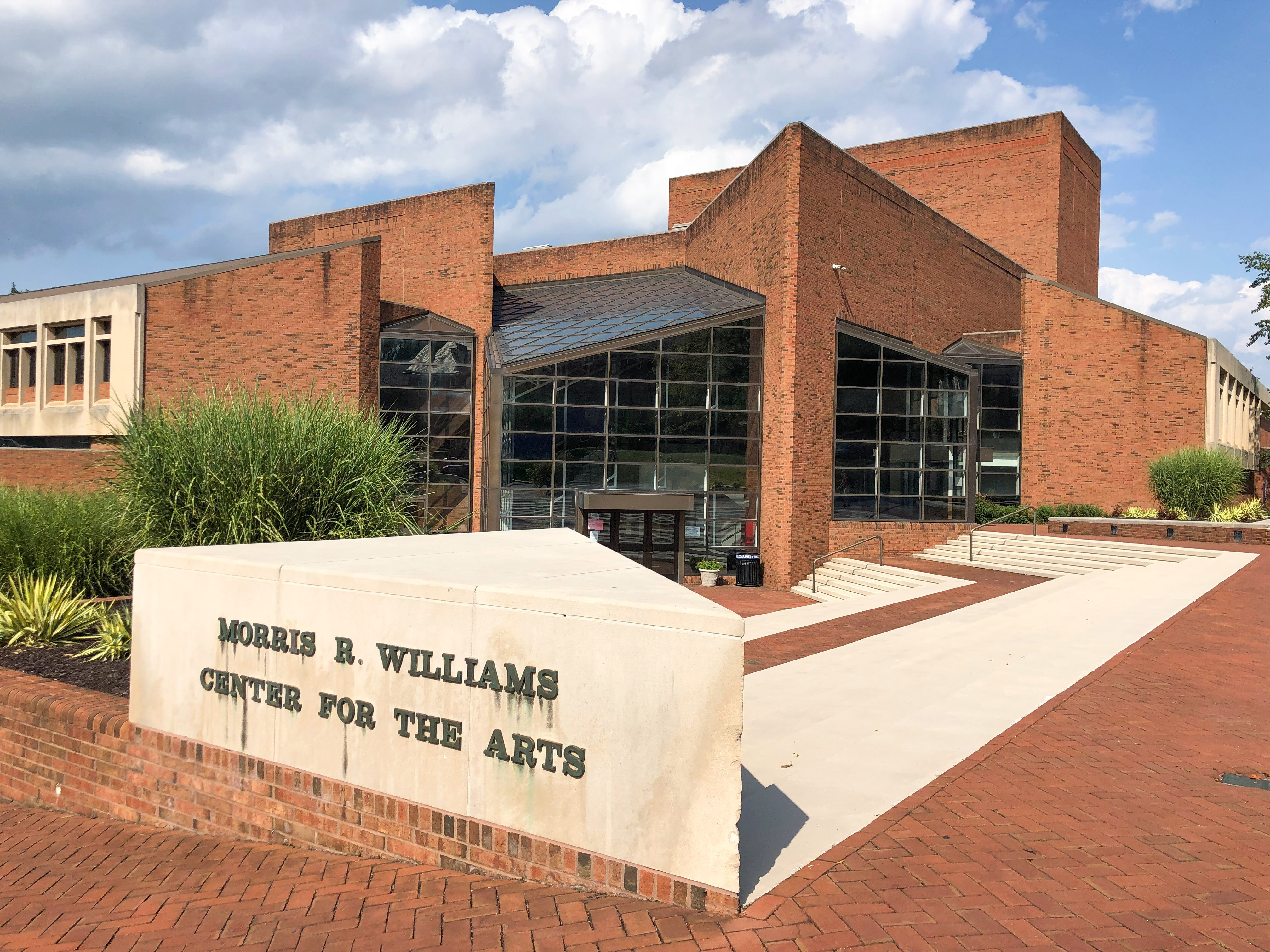 The Williams Center for the Arts might be quieter than usual this semester, but its usual musician inhabitants are still coming together to make music, virtually. (Photo by Brandon Marin ’22)

For most musicians, the last few months have not been easy. In the words of Lewis Baratz, director of the college’s Chamber Orchestra, they have been “a musician’s nightmare.” Baratz and many other leaders of music ensembles on campus have had to come up with “other experiences to create,” leading to some innovative and adaptive variations on a normal semester of making music.

Although the Chamber Orchestra still meets during their usual rehearsal time on Wednesday nights, their sessions now involve logging onto a Zoom meeting and splitting up into breakout rooms of three to four students. In these small groups, each student takes turns playing through whatever piece of music they’re working on while the others mute their microphones and play along. Afterwards, the group discusses any issues and possibilities for improvement.

“Each person has the opportunity to lead and to be heard,” Baratz said. “Everyone gets a say, and everyone can bounce their ideas. It’s much more collaborative. Because we can’t really have these sort of musical experiences come first, it’s really been a learning and team building experience.”

This commitment to maintaining a collaborative, close-knit community has been a common thread throughout the music department during the remote semester.

Rehearsals for the Percussion Ensemble follow a similar format to that of Chamber Orchestra, where all the students mute their microphones and play along with the director. According to professor Larry Stockton, director of the ensemble, the group’s goals for the semester are to work on technique, enhance group unity and become familiar with different playing styles. The Percussion Ensemble also plans to record a piece called “Clapping Music” by Steve Reich at the end of the semester.

“It’s been difficult sometimes to find that motivation, but I think the goal of having to record something by the end of the semester has given some people an incentive,” said Anna Zittle ‘22, one of the co-assistants for the Percussion Ensemble.

According to Zittle, recording music is much different than playing live.

Zittle is also one of two current students who were approached by music professor Kirk O’Riordan, director of the college’s Concert Band, to compose a piece for the group that will eventually be recorded, produced and commercially released. Other composers for the recorded tracks include O’Riordan himself, Ashley Kushner ‘19, Justin Kogasaka ‘22 and Pete Deshler, director of the choral program at Easton Area High School. According to O’Riordan, proceeds from the recording sales will fund lesson scholarships for Concert Band players.

“My piece is called ‘Body Doubles,’ and is based on a poem by recently retired English professor Lee Upton. She recorded herself reading the poem, and I am incorporating that into the final recording. Her poem is about glass replicas of flowers and the difference between perception and reality,” O’Riordan wrote in an email. “Pete’s piece will use JFK’s ‘We Choose to go to the Moon’ speech as its origin. Anna and Justin are working on themes of unity morphing into chaos, and chaos morphing back into unity. Ashley is still working through some other, similar ideas.”

These pieces are unique in the sense that they were specifically composed to be recorded, not played live.

“[Normally,] if you try to write a part for flutes, which is a fairly light woodwind instrument, while you have tubas and trombones playing at the same time, the flutes would get washed out by that big brass sound,” Zittle explained. “In editing software, you can bring that sound above the brass. So you can have the low bass, but still have that singing over top, which gives you the opportunity as a composer to experiment with what sounds you want to come out.”

Kogasaka expressed his excitement for the composition, writing in an email that he is “looking to expand my horizons of what is possible in composition through the use of recording and technology.”

Concert Choir and Chamber Singers are also experimenting with recording projects this semester.

“It’s not a virtual choir in the sense that everyone records their own part and we tie them all together,” said Caroline Sabin ’21, assistant to the choral director Jennifer Kelly. “Professor Kelly has always emphasized, listen to the people around you. She almost talks about it as though our, say, 24 voices are coming together to form a 25th voice, one voice that encompasses all of us.”

“Listening has always been an aspect that we have valued,” Sabin added. “It’s just approached differently now that we are remote. It’s now listening to what other people have done and seeing how your recording fits into that whole.”

One student group on campus has decided to create music in a time of separation, too.

The Mar-Keys, one of the four a capella groups on campus, recently launched the aptly-named “Communi-Keys” project with hopes that it will introduce the college’s music scene to those who may be unfamiliar with it, especially the incoming class of 2024.

The Communi-Keys project entails creating a musical recording of a democratically-chosen song using vocals from anyone who wishes to participate in the process, whether they are already in the a capella group or not.

“You don’t have to be the best singer. You don’t have to know how to read music,” said Sabin, who is also the vocal director of the Mar-Keys. “This is a project where we really want to include everyone. The goal is to create something we can be really proud of, to help freshmen realize that they can participate in a capella groups.”

“The implicit goal isn’t necessarily to create something tangible,” Sabin added. “It’s to foster this sense of inclusivity and camaraderie among new members, who haven’t even been to campus yet.”

More than 20 people signed up for the Communi-Keys project after the involvement fair. Although they haven’t decided what song they will record yet, Melaina Carey ’22, president of the Mar-Keys, said that they plan to choose something “fun, upbeat, and inclusive.”

“[The Mar-Keys] were the first club I really joined on campus and they welcomed me with open arms. They were so welcoming and so accepting,” Carey said. “That hasn’t really changed, it’s just moved to an online format.”

Despite the new opportunities for music groups this semester, all of them would likely agree that they have faced (and will continue to face) their fair share of challenges.

“Because music is so heavily reliant on communicating and responding in real time, the latency introduced by video conferencing platforms makes ‘live’ rehearsals virtually impossible,” wrote Kogasaka, whose current location in Hawaii makes playing along with the rest of the Chamber Orchestra particularly difficult.

Despite these difficulties, knowing that the situation is temporary and that there is a “light at the end of the tunnel,” according to Zittle, is imperative.

And until they can be making music in person again, Lafayette’s musicians play on.