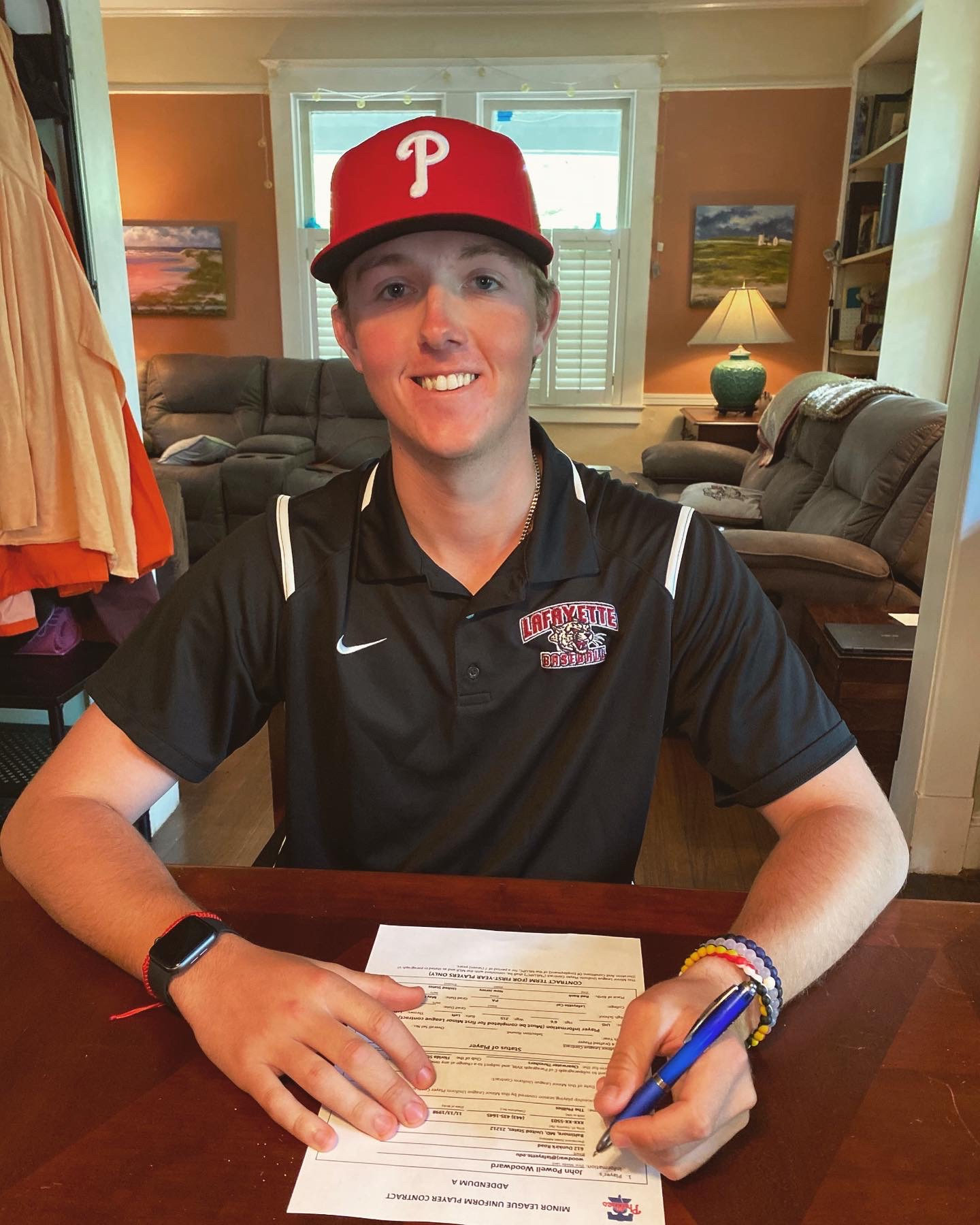 Would-be senior and Lafayette’s former pitcher JP Woodward thought his baseball career would end in high school. Now, the 6-foot-6 lefty has signed a free agent contract with the Philadelphia Phillies and is waiting for instructions from the team.

Woodward planned to use this past collegiate baseball season as an opportunity to prove himself to Major League Baseball (MLB) teams. He began garnering serious attention going into his junior year as a tall left-handed pitcher with a fastball just under 95 mph. Due to the Covid-19 pandemic, Woodward’s season was canceled and the MLB draft was shortened from 40 rounds to five rounds. Although Woodward was not drafted, he landed a roster spot through a free agent contract on June 15.

In his junior season this spring, Woodward pitched in four outings, throwing his way to a 2-1 record including a career-high 12 strikeout performance against Davidson. Woodward tossed 20.1 innings and struck out 26 batters in the shortened season as his performance flashed dominance.

“During the season I wasn’t thinking about the draft, my focus was on Lafayette and winning a championship,” Woodward said. “Once the season was cancelled, I began to consider the draft and once I got the news the draft was cut short, it hurt. At that point I told myself I could not have done anything to prevent this situation and I can’t let outside forces bring me down.”

Woodward’s positive attitude is nothing new. While his baseball career has taken off, the hard-throwing lefty did not always view the majors as a realistic possibility. Woodward made peace with the idea that he wouldn’t be playing college baseball at any level during his senior year of high school. Standing two inches shorter and 30 pounds heavier, Woodward was prepared to call it a career and attend Lafayette to receive an education.

“I didn’t have any offers from any colleges at any level,” Woodward said. “I didn’t throw hard in high school (about 78-81 mph). My senior year I was a little chubby and I didn’t even start, I was a reliever. My grandfather, whom I never met, attended Lafayette and played lacrosse here so Lafayette was the first school I looked at academically. My focus when I was applying was getting the best education possible as I didn’t think I’d be playing baseball.”

After being accepted into Lafayette, Woodward noticed the school had a Division I program and decided to reach out to the head coach at the time, Joe Kinney.

“Before I was on campus at Lafayette, I decided to email coach Kinney and say I’d be attending the school,” Woodward recalled. “I told him I am a 6’4″ lefty who throws 80 mph [and] asked if there was any way I could play on the team. Coach Kinney saw me play that summer and said he would give me a spot to tryout in the fall, but that’s all he could guarantee.”

Coach Kinney quickly saw potential in Woodward, and gave him an opportunity to make the roster.

“I noticed he was a big left-handed pitcher and in the baseball world that’s a positive not knowing anything else,” Kinney said. “He sent me some video, big guy, not in the greatest shape physically, and that showed in how he pitched. I was able to see him pitch in the summer before he entered Lafayette and he was a little bit better than he showed in the video.

“And what I told him at that point was we’ll give you our fall season to make the team,” he added.

Woodward made the team, but still had work to do.

“His freshman year, he was on our radar as someone who could be cut from the team,” said current Lafayette baseball head coach Tim Reilly.

But Woodward’s freshman year proved to be pivotal in terms of his size, mentality and skillset. After making the roster, Woodward became a key relief pitcher who often came in to secure wins in close games. He also managed to drop 30 pounds and grow two inches, making him a more daunting figure on the mound. Woodward finished his freshman year with a team-leading 4.78 ERA through 17 appearances.

“The biggest thing Lafayette has done for me is help me realize you have to work for everything you have and there is no guarantee,” Woodward said. “My progression has been pretty wild and that would not have been possible without Lafayette and [the] people that surrounded me.”

Going into his sophomore year, Woodward decided he wanted to be named one of the team’s starting pitchers, meaning more innings, more pitches and more responsibility. Woodward spent his sophomore summer working on mechanics and adding muscle and pitches to his arsenal.

“A lot of his progression as a pitcher was on him,” Kinney said. “He developed, constantly improved, and changed his physical makeup which allowed him to be more athletic as a pitcher.”

It wasn’t until the summer of his junior year that Woodward even considered playing professionally, when he decided to participate in the Cape Cod Summer League, one of amateur baseball’s most competitive leagues.

“The summer going into my junior year was when I started to believe I had a chance at the MLB,” Woodward said. “There were so many scouts and that’s when I got my advisor and he told me this was a reality and that I needed to recognize that. At that moment, I realized if I kept working hard and doing my thing, I could land with a team.”

Even Woodward’s path to the Cape Cod League was atypical. He signed with a team on a two-week contract and had to earn his roster spot for the summer.

“True to his core, he went to the Cape Cod League on a [temporary] contract: he was signed for two weeks while other collegiate players were participating in the NCAA College World Series,” Kinney said. “He then made the Cape Cod team and played there the entire summer. He has a strong willingness to take chances and bet on himself to succeed.”

As the next phase of his baseball journey begins, Woodward said he remembers the lessons he learned along the way while at Lafayette.

“The minors is really a grind from what I’ve heard and Lafayette has helped me get ready to grind it out and make it to the Phillies, which is my ultimate goal,” Woodward said. “Lafayette gave me a great education while also providing me with an opportunity to play gritty northeast baseball. Playing in cold games and taking long bus rides can be weary, but it’s worth it to be playing with the 34 guys that surround you. At Lafayette we had to work for everything and having that mentality will be my best asset at the next level.”

Looking back on his time on College Hill, Woodward had some advice for his former self.

“Enjoy it,” he said. “It’s crazy how fast it goes…I think I would just tell myself to enjoy every day because you never know what’s going to happen, and you can’t control a lot of what happens, so you just have to control what you can control.”

The next step for Woodward could be the fall instructional league or competition with a minor league affiliate of the Phillies, depending on the pandemic.