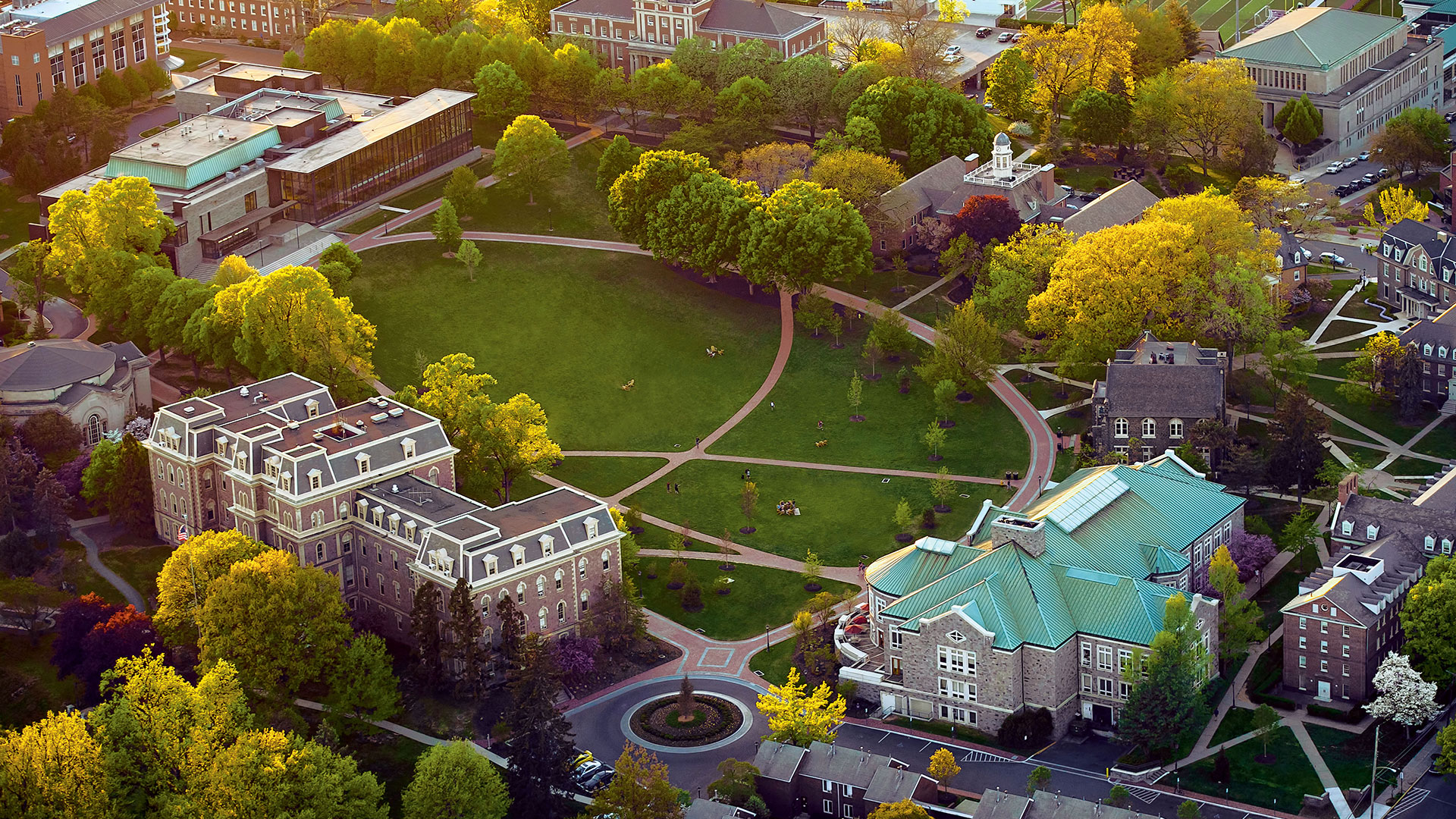 As schools around the country begin releasing their plans for the upcoming semester, Lafayette’s fate is still uncertain. In anticipation of the college’s forthcoming decision, scheduled for June 15, Vice President of Student Life Annette Diorio joined hundreds of students over Zoom in a town hall meeting hosted by student government on Monday.

The purpose of the event was for Diorio to go over the college’s planning process thus far and to solicit questions, concerns and feedback from the student body on what the fall semester could look like amidst the ongoing COVID-19 epidemic.

Diorio said she was interested to hear from students on two topics: what the student experience was like in the spring, and what students think the fall could look like. She noted that the school is considering three main scenarios including a semester of remote learning only, skipping the fall semester entirely and re-opening in the spring, and a fall re-opening where “most students are back and most things are happening in the classroom.” Of these scenarios, Diorio said the college has been “steering pretty consistently” toward the latter.

If campus re-opens to students in the fall, Diorio said that students and faculty would be phased in over several days to allow for population-level testing of all returning students. New serology tests would allow the school to test several hundred people a day and get results on-site within 24 hours.

Students flooded the Zoom chat feature with questions, which were filtered and presented by student government president Mary Zimmerman. Below are a selection of these student questions and Diorio’s responses to each from the hour-long meeting.

How are the dining halls going to work assuming campus opens for the fall?

What we would imagine…is that we would probably have to stagger out mealtimes a little bit more to accommodate a slightly lower density. In the dining area, some students might opt to take a few more meals away. And…there’s extra cleaning protocols that we have to go into place. We might still have to be using plastic utensils and bagged food for periods of time. We think that we would still have all first year students on a meal plan, sophomores are still on 14, and maybe some adjusting of some of the other meal plans if we can’t make that work.

How will residence halls work? Will students be in mostly doubles or singles?

Our plan was not to try to reduce our occupancy to have everybody in singles…because for Lafayette, that would involve the loss of a lot of ability to have a lot of students come back. Singles are a strategy that is used if you’re thinking about wanting to quarantine or isolate students in place. But having students in singles doesn’t necessarily transmit to folks staying healthier on the face because it doesn’t mean that a student in a single doesn’t have friends come over, or contact with other people.

What kind of rules would be in place for social isolation in residence halls and who would be responsible for enforcing those rules?

We’re talking a lot about what we’re calling a social contract. We need students to buy into the comeback. Can you do these things? And will you do these things? And will you help us do these things? We’d like it to be less about rules, and more about shared understanding of what has to happen to keep the community safe, to keep your faculty member safe, to keep that staff member safe, to keep each other safe, and less about us just flat out imposing rules. We have the same enforcement structures on campus, with RAs and others that we would have during other times. There would be some element, I hope, of monitoring ourselves and helping keeping ourselves accountable for friend groups and for others.

We would be planning to adjudicate…violations through our normal conduct process under the concept of a failure to comply [with the social contract]. So if everybody agrees that these are the things that we’re going to do, and then if people don’t do them, then…we have this thing where you haven’t done this. And there’s consequences for that, [which could] ultimately be that we would have to send students home if they’re really taking unreasonable risks and risking their peers and others safety. But we hope and I remain hopeful that through more conversations this summer that we can get to a place where everybody can understand what’s in play.

Will the college offer isolation housing based on where a student is coming from?

There are different states…that have different incidence of disease. Colleges now are talking about doing testing for all students when they would arrive back to campus.

How will testing work? What happens if a student tests positive for COVID-19?

I think most schools are thinking seriously about population testing for students as they return to campus, and then monitoring testing for a randomly selected group of students every so often, to see if folks are staying healthy and if things are still looking good. We would ask students…who live close enough to campus and could go home, if they happen to test COVID positive, we would want to try to encourage that. We do have isolation and quarantine housing that we had set up. This spring we’ve added to that number of beds and so we could certainly take care of students who couldn’t get home for one reason or another.

How will financial aid be affected?

If students are enrolled and receive financial aid, nothing will change there. If a student decides not to enroll or take a leave, they should ask financial aid [if their financial aid can be deferred].

Will tuition be adjusted based on the college’s decision?

If folks are here and on campus, then you’re here, and you’re on campus, and you’re paying the tuition that you would pay normally. If we’re not on campus, then that’s a question that is yet unresolved, but we will have an answer for you before we ask you to confirm for the fall, what you’re doing, and before your bills are for sure.

Will students have the option to choose remote learning for the fall?

We recognize that some students may not be able to get back. There are some students who’ve traveled or who have gone home who might have difficulty coming back and there are other students for whom being on campus might not be appropriate for a variety of reasons. They may have an underlying medical condition themselves or a family member at home who’s in a condition that they don’t want to risk any going back and forth or anything like that. And then there are also some students who are just going to not feel comfortable coming back. So we’re hoping to ask students when we announce what we’re doing, is this something that you are comfortable doing, coming back to and joining us in the community? And we hope that a lot of students would be able to do that, but we want to be able to give you the full set of information.

Would international students who are unable to return to campus or return to the U.S. be given a choice to do a remote semester?

We did recognize pretty early on that for some international students, incoming international students, and perhaps even some returning students who had gone home that coming back from their home country might create a challenge, in part, because in a number of countries, the embassies aren’t open. So if you need a visa, it’s pretty much impossible or difficult to get a visa. So we did anticipate that for some students, even if we are on campus in the fall, that some students would be unable to return and would have to sort of be engaged in some kind of learning from that distance. And that is an option that people have in their head and are planning for actively.

Will students be required to wear masks if returning to campus and will these be provided by the school?

The Pennsylvania State Department of Education is requiring that everyone in classrooms, classrooms and everyone in certain areas of campus should be wearing a mask. Unless that guidance changes, we will be doing that. We have gotten…masks for everybody that has a pretty cool Lafayette logo on it.

Will students be allowed to travel over breaks and weekends if they return to campus?

This is a thing that we really do need to have your ongoing input as we continue this planning process. How close would students be willing to stick to campus to have a semester that is on campus? It would be difficult in the fall to imagine a lot of travel on common carriers, so buses, trains, planes, that wouldn’t put the community at risk. That’s one of the reasons why we were interested in doing population testing when you come back in.

But as the you know, the testing landscape is changing a lot. Our current plan for our faculty and staff is to really restrict travel and to not be sending folks to a lot of conferences or other things that drive them away from campus. And we would want to do that as much as we could with students. So that’s something that we hope that various groups and student government can lead more conversations with students over the coming weeks about how realistic that is. I’m not suggesting that we’re trying to imagine people locked in their residence hall rooms unless they’re in class, but we are looking to try to restrict both visitors to campus and folks going away from campus as much as we can.