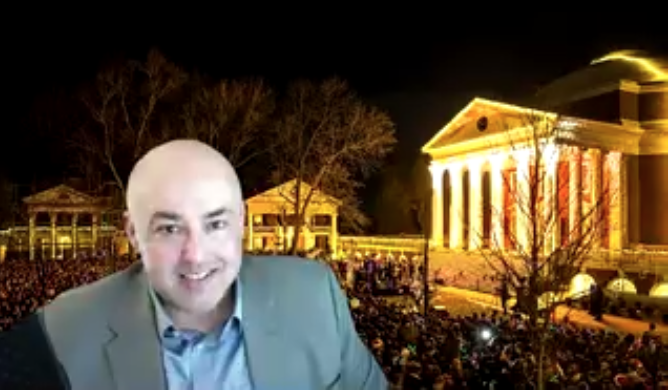 Siva Vaidhyanathan delivered his lecture in front of the University of Virginia ‘grounds,’ where he works and the site of the 2017 white nationalist march. (Photo by AJ Traub ’20)

What happens when someone with authority employs a tactic typically used by the powerless? Dr. Siva Vaidhyanathan posed this question in the context of President Donald Trump’s Twitter usage in this year’s Thomas Roy and Lura Forrest Jones Visiting Lecture on Wednesday.

Vaidhyanathan, professor of media studies and director of the Center of Media and Citizenship at the University of Virginia (UVA), presented this question and many others in his talk ‘Cacophony: Information, Misinformation, and the Fracturing of Attention,’ which explored free speech in today’s information age. The talk was hosted over Zoom and was followed by a panel discussion and interview with faculty and alumni, moderated by President Alison Byerly.

One aspect of contemporary free speech Vaidhyanathan examined in his lecture was the “heckler’s veto,” a concept that he explained to be a voice for the powerless.

“The heckler has the power to shut down whichever speech act was expected to happen,” he said. “You can mess up communication…by making it overflow and lock up.”

This, Vaidhyanathan said, is what Trump is doing when he Tweets. It’s a tool that can be used to spread misinformation on social media.

“It seems like an effort to put us all off our game,” he continued. “He found a game he could play in his style…he totally took advantage of it…a lot of things had to go right for him, and they did.”

Throughout his lecture, Vaidhyanathan had his Zoom background set to an image of UVA, which was also the site of the Charlottesville white nationalist rally in 2017, where protesters touted Nazi and Confederate flags under the protection of free speech.

“The town I am in was invaded by thousands, mostly men,” he said. “They came here to frighten, to terrorize, to beat up, to kill. In this country, the second amendment trumps the first amendment.”

Today, Vaidhyanathan said, people are unable to talk about serious issues because of misinformation.

“Now, the whole world is on fire,” he said. When people try to take problems seriously, he added, people doubt the experts.

“Everybody is yelling all the time,” he said. “Yelling is the default mode in this age. We’ve gotten to the point where yelling is expected.”

According to his UVA profile, eight of Vaidhyanathan’s 10 most recent columns for The Guardian have included ‘Facebook’ or [Mark] ‘Zuckerberg’ in the title. It’s the chief platform of social media he focused on during his talk.

“I think the very concept of Facebook is a problem,” he said. “But we’re not putting that genie back in the bottle any time soon.”

Social media services are problematic due to the algorithms used to grab our attention, Vaidhyanathan said.

“Facebook and Google choose for us who we will communicate with on any given day,” he said. “They are the chief ways we try to mediate cacophony, and it’s not working well.”

Vaidhyanathan said it would help to invest in schools and churches, any “institution where people gather to deliberate.”

“Looking at our new systems, all I can see as our way out is to reinforce our old systems,” he said. “If we are going to succeed as a democratic republic, we need to foster discussion, a fuller engagement of deliberation on issues.”

Vaidhyanathan said he read everything Zuckerberg wrote since starting Facebook, and was surprised how little he had a grasp on the destruction it helped cause. He said Zuckerberg surrounds himself with kind people, and didn’t expect others to act differently on Facebook.

With different media platforms all trying to grab users’ attention, Vaidhyanathan said, they “double down” on their efforts, making them “more salacious, more subtle.”

“They hinder our ability to execute any serious politics,” he said. “All politics is rendered un-serious.”

“Those things we click through are intentionally designed to make them hard to read through,” he said. “You can only reject them, you cannot amend them.”

“If everybody who’s listening to me now were to quit tomorrow, Facebook would not notice,” he added. “Facebook is embedded among power structures in the world.”

“I think there is room for more creativity in the regulatory area,” he said. “I wish we would give up all hope that companies will treat us better.”

Vaidhyanathan said he is all for “using these systems and harnessing their value,” citing the counter-protest held at UVA after the infamous white supremacist march. He said students organized it, and six to seven thousand people showed up.

“We were told not to use social media to make this happen,” he said. “The Nazis had infiltrated the activist groups. We didn’t want another showdown. This was an amazing evening.”

“‘Jews will not replace us’ was one of their chants,” he added. “One of our chants was ‘We replaced you.’”