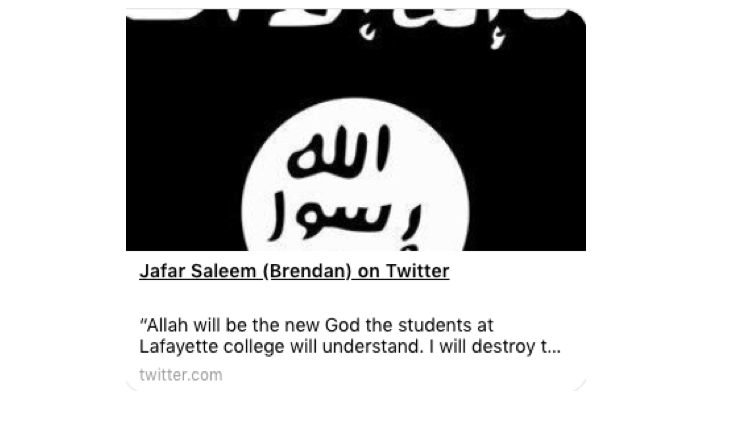 The 21-year-old Alaskan gamer, Gavin Lee Casdorph, pled guilty on Monday, Apr. 20 to one count of willfully making false threats against Lafayette College in May of 2018. US District Judge Edward G. Smith presided over the guilty plea hearing in Easton via video teleconference, according to the press release from the Department of Justice.

Casdorph was arrested in December 2018 after an extensive FBI investigation that “spanned three states and two continents,” and eventually led federal authorities to Anchorage, Alaska. According to President Alison Byerly, the extent of Lafayette Public Safety’s involvement with the investigation lasted up until about this point.

The FBI investigation determined that Casdorph formulated his plan for the false threats after an argument with an online gamer he met over the internet. Byerly further explained that Casdorph’s threats were his attempt to take revenge on the student who he had the dispute with online.

Casdorph’s original tweets came from the now-suspended Twitter account @BdanJafarSaleem and claimed to be a current Lafayette student studying Economics named “Brendan” who now pledged allegiance to ISIS. Casdorph also posted on the website Pastebin, stating: “I have set up several pipe bombs, pressure cookers and nail bombs around the campus and plan to inflict the utmost damage possible.”

In addition the the tweets, Casdorph also sent a mass email to members of the college’s admissions staff with the subject line “ISIS Will Prevail: Allah is the True God,” according the press release.

While the threats were deemed not credible by law enforcement officials shortly after being made, Byerly said they still caused a great deal of unease for the campus community. Final exams were pushed back a day to allow students more time to prepare, and the 2018 commencement ceremony’s location was moved to a more secure location.

In addition to the short-term consequences the attack caused, Byerly said the incident had a larger impact on the college community, such as motivating conversations about college communication protocols and overall campus safety.

It “makes me feel relieved that it has gotten to this final stage of closure,” Byerly added.