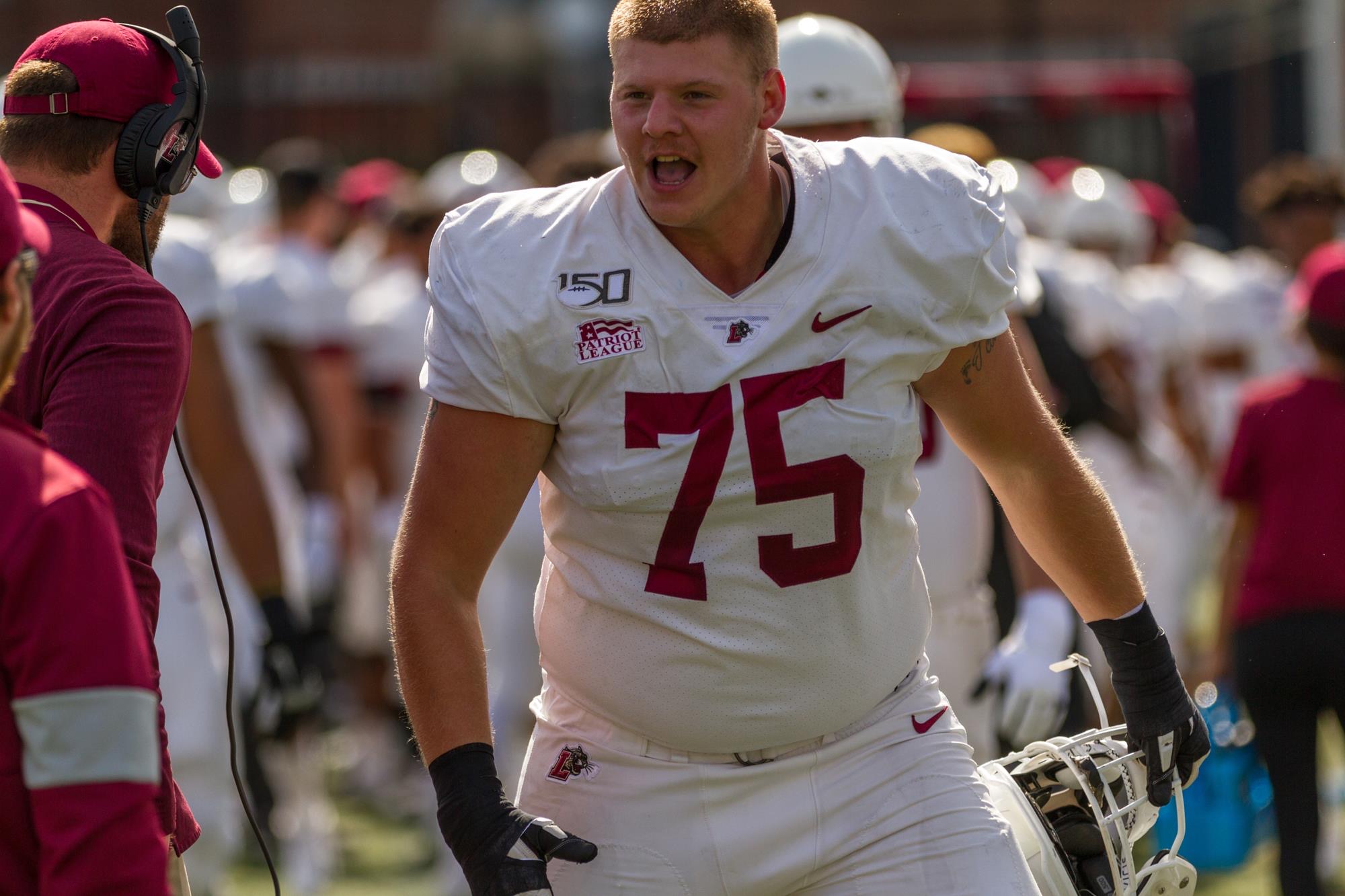 Senior co-captain Jake Marotti will join the CFL after playing four years for the Leopards. (Photo courtesy of Athletic Communications)

Senior offensive tackle Jake Marotti was looking to showcase his skills at different events for his chance to sign with a professional football team, before the usual workouts and pro days were suspended due to the coronavirus concerns. Luckily for Marotti, he already had a deal on the table.

On March 18, Marotti realized his dream of making a professional football team by signing (over email) with the British Columbia Lions of the Canadian Football League (CFL). His contract is for one year, with an option for a second year.

“I’m just excited to go out and play football again, basically a different style of football,” Marotti said. “With any year anything can happen. I haven’t met the team yet, but I’m sure they’re all hard working guys, everyone wants to be great.”

The one-year contract, Marotti said, allows him to get his first taste of professional football, and then see if he can make the National Football League (NFL) for the next season. If not, he has that second year option.

“With one year in a professional league it allows me to get better and stronger, and I can work out and then try out for an NFL team,” he said.

Marotti, a captain for the 2019 season, led an offensive line with a running game that reached 150 yards four times, three times in conference play. The team scored 13 rushing touchdowns in 12 games.

“My goal [coming into Lafayette] was to just make the travel roster and get in some games,” he said. “Sophomore year I started. Junior year I started again and made first team all-Patriot League. That’s when it hit me that I can go as far as I want to.”

In 2016, the Leopards won just a single conference game, but broke through in Marotti’s senior year with a second-place finish after a thrilling win over Lehigh, the team’s first in five years.

One day in January, Marotti woke up to a text from his agent saying the Lions of the CFL are interested in him and wanted to offer a contract. He hadn’t done any pro days yet.

“I told him I’m very open to it and very excited,” Marotti said. “I wanted to make sure they were going to allow me to proceed with the workouts for the NFL, but I kept that offer in my back pocket.”

Marotti said he was surprised that he received an offer before any of the pro days. He continued the process by going to a pro day at Villanova. This process came to a halt, however, due to the coronavirus, and the fact that he had an early offer came in handy.

“[The Lions] kind of found me,” he said. “They watched game film and stuff like that. As long as you’re playing well and putting good film out, they’ll find you.”

Marotti has already done research to prepare for the CFL, and says that for the most part, it’s pretty similar to the NFL.

“A difference is instead of the defensive lineman being closer to the offensive line, there’s a one-yard gap in the CFL, so there’s more space in between,” he said. “So there’s more time to react, but more time [for them] to get speed and momentum.”

The Lions play in Vancouver, and Marotti expects to move into an apartment nearby with teammates for training and games.

“The people I’ll be going against are professional athletes as well, so the competition level will increase, so I’m going to have to focus more on my technique and being very strict with it,” he said.

As with all sports, the schedule is subject to possible change, but as of now, the Lions are set to play in the first game of the season on June 11 in Edmonton against the Eskimos. The season runs into November, leaving him with plenty of time to explore his options for 2021.

“My dream was and still is the NFL, but I was very open to the CFL and other leagues,” Marotti said. “As a kid I was dreaming of the NFL, but I realized they’re all good leagues so I was open to any opportunity I had.”