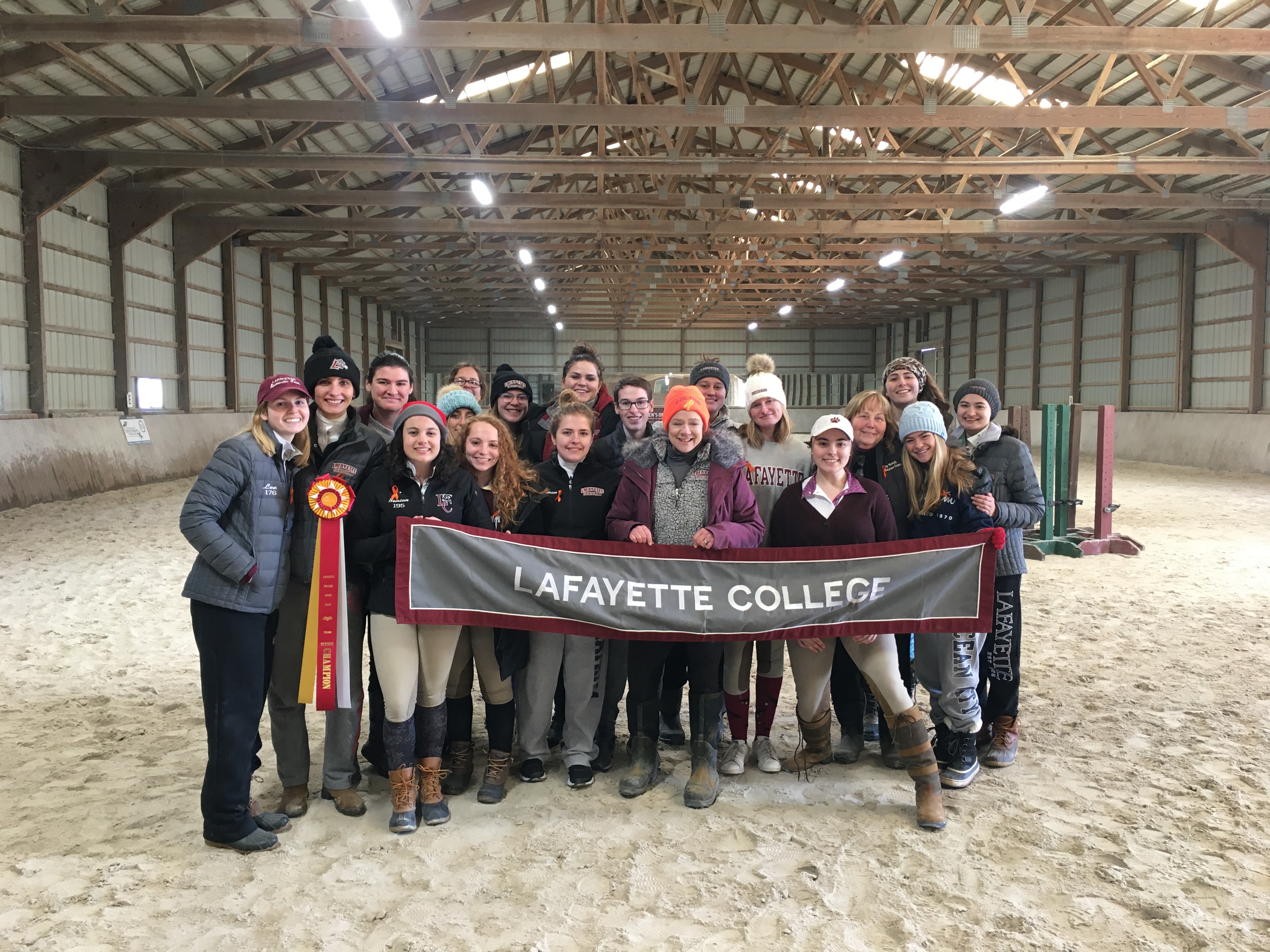 The Lafayette equestrian team hosted a show last Saturday, complete with raffles, ribbons, and many tears shed. After hearing their coach Kelly Poff’s grandson was diagnosed with acute lymphoblastic leukemia, the team planned a home show Poff would never forget.

“I knew our hosted show was coming up,” club assistant Justine Perrotti ‘19 said. “I told Kelly [Poff] about a week after she heard the news that I would take lead host of the show so she didn’t have to worry as much.”

“It was great,” Poff said. “It was really great. Everybody rode well. I think they had what we now call the ‘#ColtonStrong’ pride going in.”

“We’re a pretty small school, and we have a smaller team, so it’s hard to beat the bigger schools,” Poff added. “Any champion or reserve champion is a very big deal for us.”

Perrotti said the fundraising efforts earned $732 for McGregor who recently finished his first round of chemotherapy and is in remission.

“We all care so much about Kelly [Poff] and her family means so much to me that raising that much money was so heartwarming to the point of tears,” Perrotti said.

Along with Perrotti, the team’s board consisting of junior president Amanda Fanning, vice president Emma Wilson, senior secretary Julia Lee and senior treasurer Leah Epstein decided that the home show would be dedicated to McGregor.

“We wanted to open donations and have a fundraiser,” Fanning said. “Justine [Perrotti] got a bunch of stuff to raffle off, and some of our team’s families made baskets. It ended up being really successful.”

Fanning said that a lot of work and late nights went into the preparation, and that other team members chipped in by making signs for stuff like the parking and the raffles.

“When we told Kelly [Poff] the amount we raised, she started crying immediately, which made everyone else start crying,” Fanning said. “She told us how humbled and grateful she was to have a team that cared so much for her and her family.”

In most shows, Lafayette finishes third behind Rutgers and Scranton, according to Fanning. She said to pull ahead of Scranton for reserve champion was “pretty special.”

“It was really nice to be able to get second at our show with all the work we put into it and all the work we did for [Poff],” she said. “Because we put so much work into that show, all our work paid off and came to fruition.”

The next day, the team traveled to another show, where many riders arrived with their orange ribbon pins still on.

“It was awesome to see everyone still wearing ribbons the next day,” Fanning said. “It felt like everyone internalized the story and wanted to show their support.”

Lafayette earned third place in the second show, and sophomore Chloe Meyers earned high point rider, finishing first in limit fences and intermediate flat. She said she wasn’t expecting to do that well since she had only just moved up from limit to intermediate in flat the day before.

“That was surprising,” she said. “I was not expecting to win. I remember I was feeling a lot of pressure going in because the horse I was riding had just won the two previous flat classes, so I had to keep up to the judge’s standard for that horse.”

Sigmond-Warner earned the team’s other first place finish of the day, in novice.

After finishing in fourth at their first meet of the spring, the team put together second place and third place finishes on a weekend dedicated to McGregor.

“The whole weekend was a lot of fun,” Meyers said. “I know [Poff] was really proud of us. We worked really hard for our hosted show and it really paid off. I was really moved by the support of all the other teams.”

“Everyone was so excited that we ended up pulling ahead as far as we did and have our riders perform some of the best riding they’d done all year, being up before 5 a.m. right before daylight savings day, and getting up again after,” Perrotti added.

Fanning, Wilson, Epstein and Meyers are qualified for regionals, and a few others could qualify throughout the rest of the season.

“I love all these kids, so any day is emotional when the kids do that well,” Poff said. “They’re trying to achieve their own personal goals, and whenever they do it’s emotional.”

Poff said that the gestures by the team were “humbling” and “meant the world to [her].”

“We’d love continued prayers for Colton as he fights through this devastating disease,” she said. “I feel honored to be the coach of Lafayette’s equestrian team. It was pretty special, and they did it on their own. I had no idea.”

The Poff/McGregor family showed Colton photos from the show, which Poff said made him “really happy.”