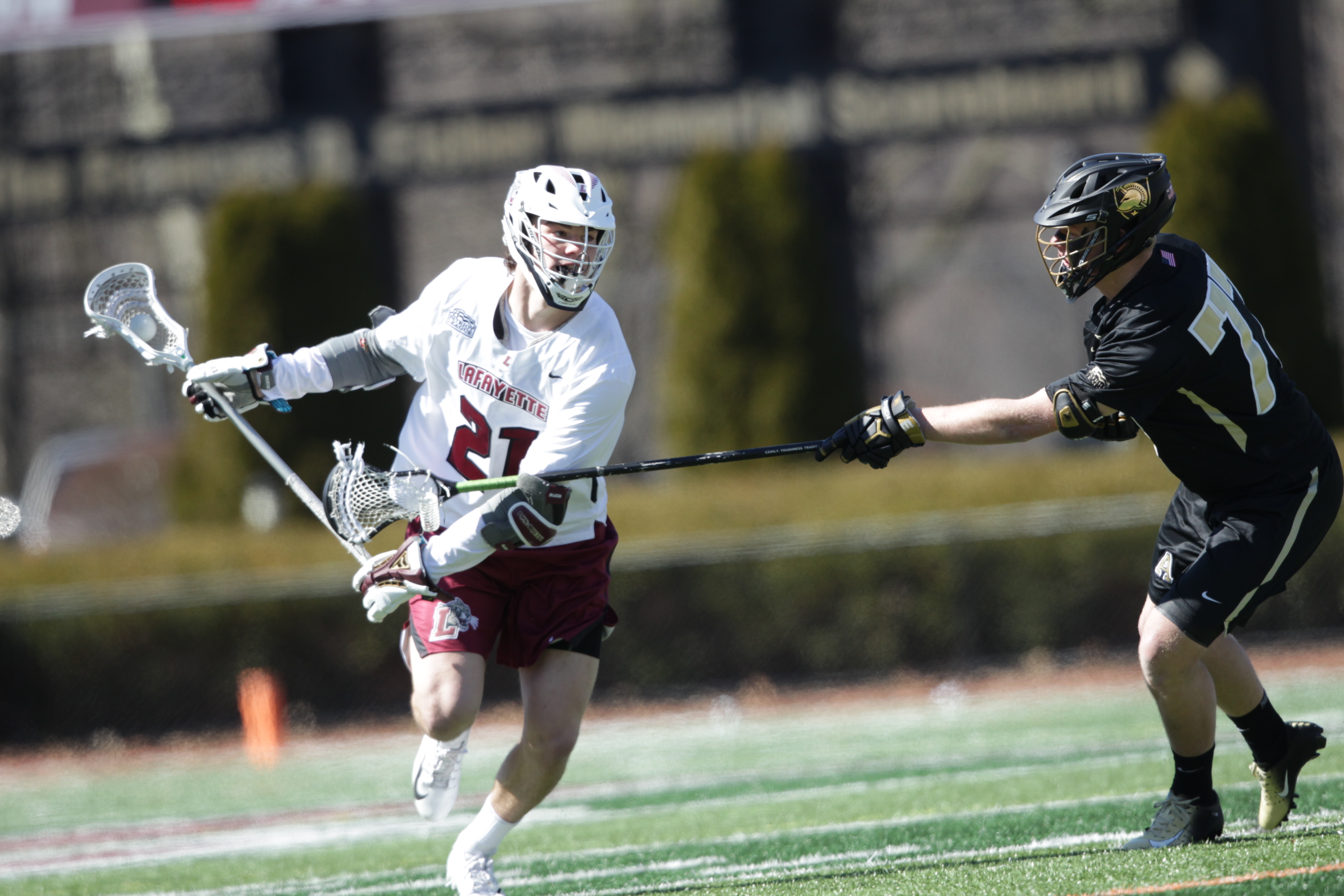 Men’s lacrosse scored just one goal in the first half in their loss to Army. (Photo courtesy of Athletic Communications)

The Lafayette men’s lacrosse team came up short against Army last weekend, losing 16-8 to the 15th-ranked team in the country.

Despite outscoring the Black Knights in the second half, the game was the sixth loss of the season for the Leopards and their fifth against ranked opponents.

Second-year head coach Patrick Myers’ large recruiting class has been an integral part of this season’s team. Seven of the eight Lafayette goals came from freshman, and first year midfielder James Turco won 17 of his 27 faceoffs at the X.

“I think these young guys are starting to gain confidence, and you saw what they could do in the second half of that Army game, and it’s something that we’re trying to build on,” Myers said. “If we can continue to get great leadership from the upperclassmen and our freshmen continue to improve…we’re going to continue to see longer stretches of good lacrosse.”

The Black Knights dominated the first half of the game, going into halftime with an 11-1 lead over the Leopards and scoring the first two goals after the break. Lafayette responded with four consecutive goals of their own, with two goals apiece coming from freshmen attackers Macklin Fitzpatrick and Nick Jessen.

“We made some mistakes early but after coach took a timeout in the third quarter and spoke with us, we played with a lot more communication and urgency,” said sophomore goalie Ryan Ness. “[Fitzpatrick] and [Jessen] really came out with some intensity and sparked our offense which was great to see from the freshmen.”

Army and Lafayette scored three goals each to close out the game. Two goals came from freshman attacker Ian McCauley and one from junior midfielder Bryan Hess. The Leopards were able to outscore the Black Knights 7-5 in the second half.

“It took us a little time to get into a groove, and in the second half we did a better job of matching and exceeding the opponents intensity as well as sticking to our game plan and [the] keys to the game we had been talking about all week,” Fitzpatrick said. “Our execution was better coming out of the huddles and our overall awareness, communication, and urgency picked up, making it easier to run our offensive sets which got us a lot of good shots on cage.”

The team is scheduled to play several more ranked teams in the Patriot League including Bucknell and Lehigh during the regular season, so more challenges await for the Leopards. However, the team’s upcoming schedule has been postponed through April 5 due to the coronavirus outbreak, and it is unclear how it will affect the regular season and playoffs at this time.

“I think playing the best is part of building a good program,” Myers said. “Gaining that valuable experience is something that’s gonna bear fruit for this program going down the road.”

Last year, the Leopards started 4-1 but proceeded to go 0-8 in conference play.

“I think that understanding that there is a whole other level out there and exposing our guys to that is something that is really important,” Myers said.

“When you recruit you want to play the best,” Myers added. “It’s important for them to see that we’re challenging ourselves in the out-of-conference schedule, and it has helped us attract top talent.”

The next scheduled game is on Saturday, April 11.