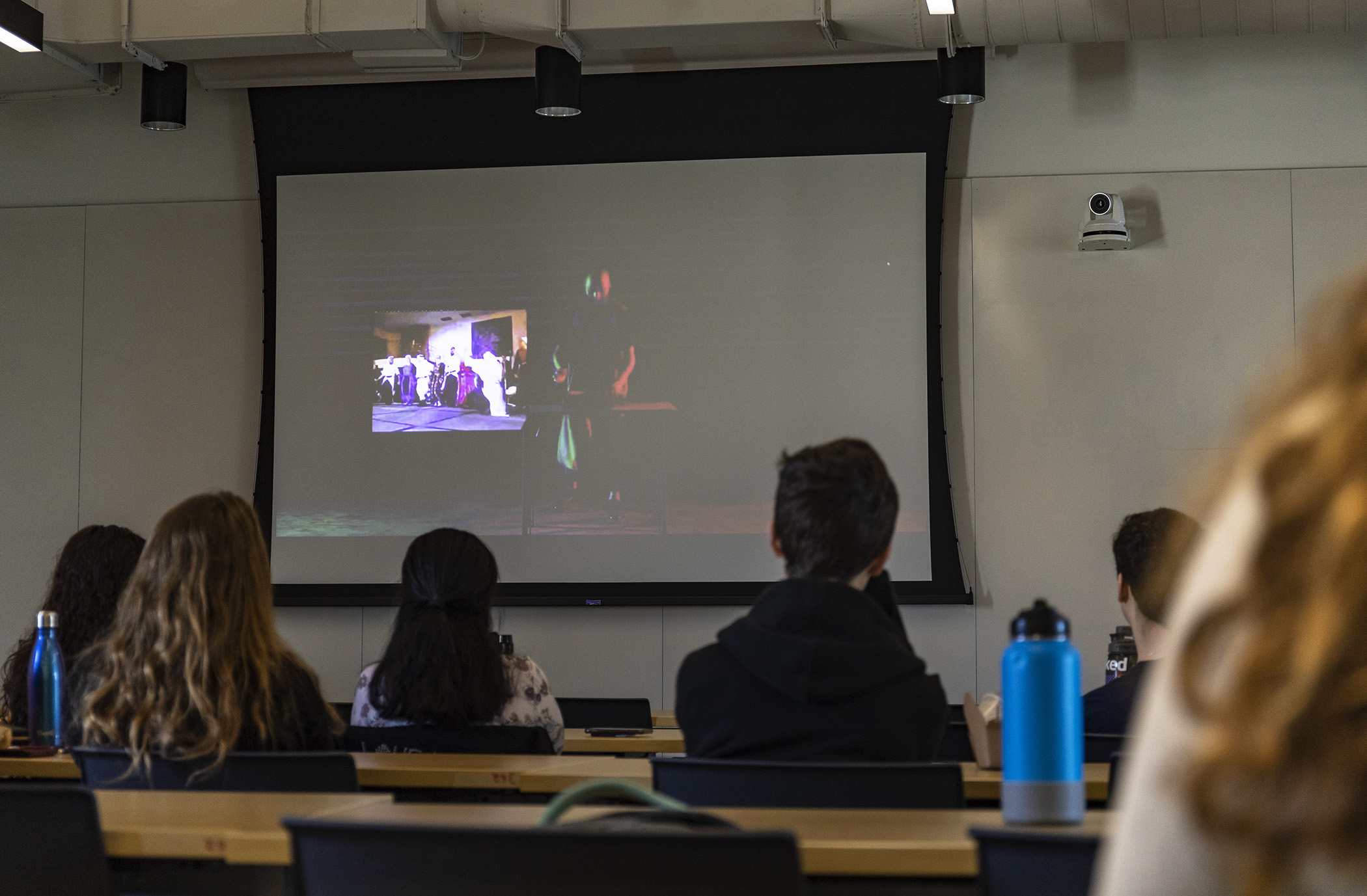 Refugee Action holds an open meeting once a semester to educate any interested students on refugee-related topics. (Photo by Elle Cox ’21)

In an increasingly connected world, the power of music can go a long way. Traditionally marginalized voices can sing out against the political grain and be heard, and anyone has the power to listen.

This past Monday, the college’s Refugee Action club held an open meeting to discuss the role of music in refugee communities. Organizers of the event selected three songs that they felt conveyed stories of struggle, hope and resilience.

The first song discussed was “Milliardat” by DAM, a Palestinian hip-hop group. The song touches on the history of the Israeli occupation of Palestine and even references a refugee camp.

In the song, the lyric “Billions of dollars are spent to keep us separated” in Arabic is repeated throughout.

In a subsequent discussion, one discussion member noted that the song challenged her way of thinking about Palestine that is typically directed by media outlets.

Another discussion member said that the emotions of the band members are now “accessible” with the existence of this song.

The second video showed a crowd singing a Dabke in Syria to protest Syrian President Bashar al Assad. The song sounds more like a chant as its participants repeatedly yell “Get out Bashar!” in Arabic among other sentiments.

Participants discussed their conflicted feelings over both wanting to dance to the beat of the chant and understanding its serious undertones.

Incorporating a chant that a crowd can participate in can make protest even more powerful, according to one discussion member.

The final song discussed was called “Matalib” by Sammany. Performed by the Sudanese artist Sammany with only a guitar accompanying him, the song is a tranquil call for peace amidst the current crisis in Sudan.

While most of the song is sung in Arabic, the chorus is performed in English. It begins with the line “It’s really simple, all we want is freedom.”

The discussion afterward contemplated the act of speaking calmly as a way to be heard and taken seriously.

One discussion member added that Sammany was probably performing for a global audience as seen with the inclusion of English lyrics in his song.

In an interview after the event, club member Henry Hinchey ‘20 explained that he came up with the idea for the event by reflecting on his own experiences with languages and traveling internationally. Hinchey speaks several languages, and through his most recent linguistic undertaking, Arabic, he discovered a host of powerful music.

“I use music as my main method of studying [languages]…I discovered a lot of politically charged music, particularly from Palestine, Syria, Sudan. It’s something that I’ve been very passionate about in my personal life, and I wanted to share with RefAct and the Lafayette community,” Hinchey said.

“The connection between music and identity and self-expression I think is really unique,” Berner said. “It’s become a unique and effective form of protest along with other forms of media the past few years.”

“I think that music has just an incredible power to grab emotions, to get people interested. It both is very impactful as a method of expression and for protest, but it’s also an impactful way to draw people into these issues here on campus because it is so visceral and it is immediately impactful,” Falk said.

“I think another thing that makes music really effective is that it reaches a more global audience, and I think in times of change, one of the most effective solutions is international outreach,” Berner added.

In addition to being able to reach a more global audience, through the combination of music and an open meeting, the event coordinators said they hoped to broaden the circle of those interested in understanding the situation of refugees around the world.

“Our intention with all open meetings is to educate a wider net of Lafayette students on issues related to refugee crises around the world and to raise awareness about their plight,” Haber-Fawfett wrote in an email.