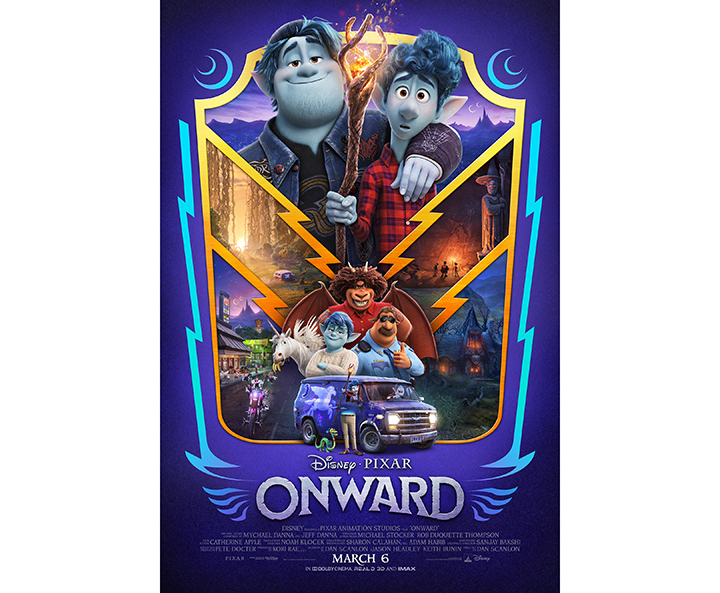 ‘Onward’ includes many touching and hilarious scenes that examine the power of relationships. (Photo courtesy of IMDB)

Much like its title, “Onward” is a film that gets better as its story progresses forward.

The movie’s first 15 minutes set up its world, and the characters are rather dull and uninspired. However, once the plot essentials are set and the journey gets started, the mystery becomes captivating enough to keep the viewer in their seat. “Onward” is a film that deserves to be seen and not dismissed despite its flaws. Regardless of the lackluster world it takes place in and some issues with pacing, it has a wonderful story that culminates into a brilliant ending that is sure to leave many exiting the theater with watery eyes.

“Onward” takes place in a fantastical world with elves, manticores and unicorns that gave up their magic in favor of technology. Two elves, Ian (Tom Holland) and his older brother, Barley (Chris Pratt) discover their deceased father’s staff with instructions for a spell that will resurrect him for a single day. When they attempt to cast the spell, the father is resurrected without the top half of his body. In order to complete the spell, the brothers set out on a journey to find any remaining magic in the world that will allow them to spend one last day with their father.

The strength in “Onward” lies less on what the brothers come across on their journey and more upon the characterization and relationship between the them. Throughout the film, both brothers come to view their relationship in new ways due to how they are effected by the movie’s events.

This concept of relationship growth is further highlighted in scenes where magic is used as a medium for storytelling. Ian, an inexperienced and anxiety-ridden wizard, has to learn from his brother who is charmingly arrogant. In addition, many of these spells challenge Ian to be more trusting and confident in himself, which enable his character development. In this sense, the story feels very heartfelt and relatable.

Another strong aspect of the film is the way the father continues to bond with his sons while lacking the top half of his body. Without using words, he finds ways to remind his sons about the importance of their relationship, resulting in several touching and hilarious scenes.

The moments where Ian uses magic reveal the filmmakers’ intentions in their creation of a world where magic is cast aside because of the convenience of modern technology. The movie would have been much more complete if it analyzed the ways in which magic and technology could coexist in not just the lives of the main characters, but in the world itself. Unfortunately, this aspect of the movie was left, more or less, under-analyzed.

Additionally, the world the story takes place in is interesting, but it is just not as original or groundbreaking as worlds in other Pixar films such as “The Incredibles,” “Coco” and” Finding Nemo” even though it is still creative when compared to other children’s films.

That being said, with so many children’s films based on sequels or books, Pixar should be commended for basing their film off of a new intellectual property, and it seems with its upcoming film “Soul,” Pixar plans to continue this trend of original ideas.

For that reason and for its wonderful story, I recommend checking out “Onward,” and for those who may not like the film at first, I suggest being patient as the film’s ending is truly spectacular.

So far “Onward” has made $40 million dollars in domestic box office revenue and hopefully, that number will rise as more people check it out.