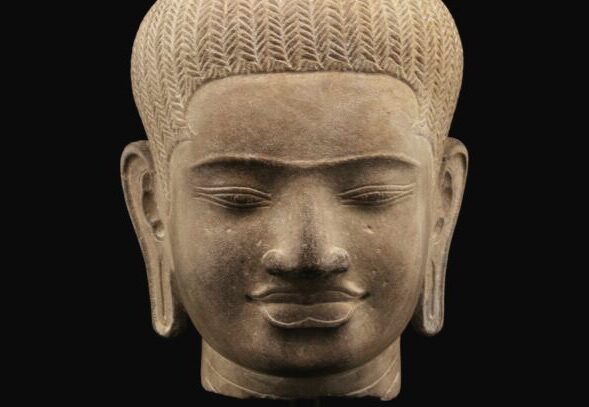 Jim Sanborn is a sculptor with a keen interest in science, art and forcing people to think. His exhibition “Looted?” is currently on display in the Williams Center for the Arts.

“Looted?” is Sanborn’s study on the world of forged antiques, which have been penetrating the art market at high frequency over the past years.  It has become so much of an issue that some museums have ceased adding to their collections in fears of accidentally acquiring a fake piece of art.

Sanborn highlighted this fear by producing a series of “high-end reproductions” of important Cambodian art.

In order to do this, Sanborn spent years studying the chemical means of forging antiquity. From both conservationists in the United States and professional forgers abroad, Sanborn learned how to age new sandstone so that its material properties would be identical to the original Cambodian pieces.

At the heart of Sanborn’s “Looted?” is the question of what is valued within the artistic community – is the authenticity of a piece more important than its aesthetic and structural properties?

Sanborn’s exhibition normalizes high-end reproductions and brings awareness to their value to the art community. By shifting away from illegal forgeries and towards legal high-end productions, the black market trade of forgeries plaguing the art community can be mediated while still acknowledging the value of well-produced replicas.

Alexandria Kasparian ‘22, who learned of the exhibition through her art history class, felt that Sanborn’s work was important.

“Since they are not truly original, there’s no way to prove that they’re being made exactly as they would have been originally. Nonetheless, it’s fair to say Sanborn’s and the forgers’ works are impressive and can be used to highlight traditional Cambodian styles and history; they just shouldn’t be viewed as stylistically authentic, in my opinion,” Kasparian said. “I think there should be a better way of stopping looting rather than selling reappropriations of works with high price tags to combat the buying of stolen items.”

Sanborn’s past work is similarly thought-provoking. His most notable piece, “Kryptos,” is an unsolved encrypted sculpture suitably placed in front of the Central Intelligence Agency’s (CIA) headquarters in California. The solution to parts of Kryptos has alluded even the most prestigious cryptographers, despite Sanborn’s release of clues throughout past years.

Even once it the mystery is solved, the message is a mystery in itself.

“They will be able to read what I wrote, but what I wrote is a mystery itself,” Sanborn once commented.

Sanborn’s mysteriously philosophical, science-based art has influenced both the disciplines of science and art throughout the past twenty years. “Looted?” will be showing at the Williams Center until April 11.