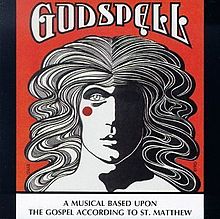 ‘Godspell’ is a 1972 musical that modernizes the messages of the Bible, specifically from the Gospel of Matthew. (Photo courtesy of Wikipedia)

While Lent began on February 26, students at the college were able to celebrate this past Tuesday with the viewing of the theological musical “Godspell.”

This past Tuesday, the Newman Association welcomed the Lehigh Valley-based theater troupe Sing for America to perform this musical production. The show was purposely timed with the beginning of the Lenten season.

“Godspell,” a musical composed by Stephen Schwartz in 1971, focuses on modernizing the messages of the Bible by placing the Gospel of Matthew in more relatable situations.

The production included a simplistic set, allowing for the performers to focus on their interpersonal relationships and the effects that Jesus had on the people as well as his struggles to convert them.

The first act of the musical is structured as a series of parables that are primarily based on the Gospel of Matthew, examining the lessons that come out of them, while the second act is a more coherent story which ends with the crucifixion of Jesus.

The Newman Association was established at the college in 1978, and while it is a primarily Catholic organization, it welcomes members of all religious backgrounds.

Joseph Teddick ’20, vice president of the Newman Association, said that from this performance he hopes people “can see the importance of Jesus’ life and why so many people were drawn to him.”

Teddick added that Sing for America “just found [the college]” and helped set up the event, so all the college had to do was host and promote it.

According to Sing for America co-founder and actor Jewel Gilbert, the group is a non-profit organization created in 2011 by his family. Since that time, they have adapted 36 different shows and done about 1,250 performances.

Gilbert said that in regards to why “Godspell” was selected over other religious musicals, the play itself isn’t necessarily what is important. Instead, the “intrinsic values within the play” are more crucial.

“The gospel is really the greatest story ever told,” Gilbert said. “It’s the hero’s journey.”

However, Gilbert said he mainly hopes the people watching are able to gain “hope, passion, and truth,” just as the performers have from their experience in the show.