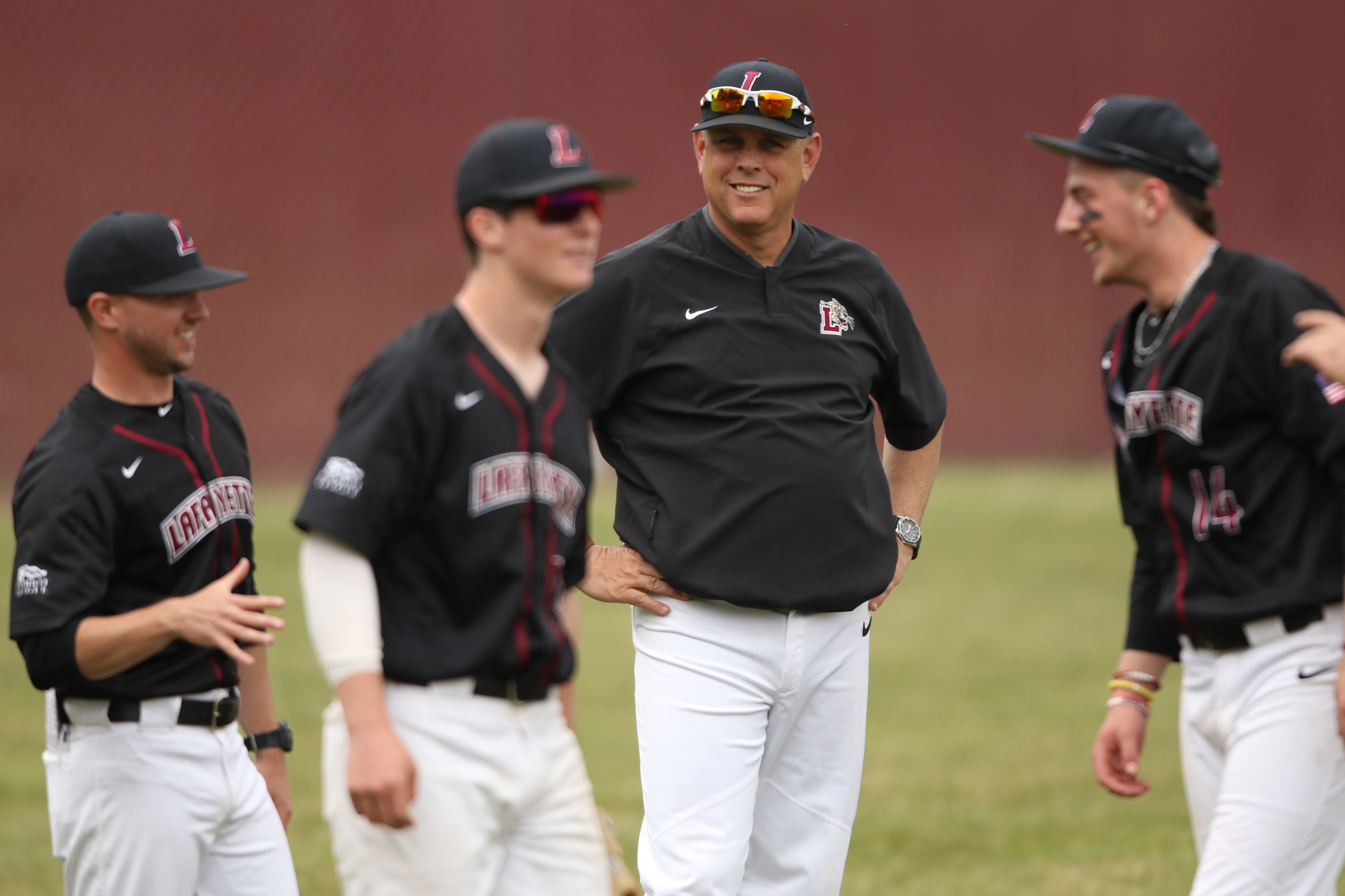 Baseball head coach Joe Kinney announced this season to be his last in a December team meeting. (Photo courtesy of Athletic Communications)

In December of 2019, Kinney announced that his 21st season would be his last. Sophomore catcher Dylan Minghini said there was some speculation, but no one thought Kinney’s retirement as a sure thing until he announced it.

“You could really tell how hard it was for him to get the words out,” Campbell said. “It was an emotional moment for him and us alike.”

“It was more of a joyful time, congratulating him on a great career,” Minghini added. “More joyful than sad.”

“I’ll miss it tremendously, I’ll miss the players tremendously,” Kinney said. “I’ll miss my assistant coaches, and also the athletic department staff that I work with on a daily basis.”

During his time at Lafayette, Kinney has seen many renovations to Kamine Stadium, as well as various improvements to baseball and softball’s indoor facility, the Morel Field House. Kinney said recruiting has gotten more competitive, and the technology the team uses has advanced.

Kinney’s best year as head coach came in 2007, when the team notched a program-best 33 wins on their way to a Patriot League championship, followed by NCAA Regionals.

Kinney said his decision comes after “family opportunities that [he and his wife] decided were too good to pass up.” He added that he’ll stay in touch with the people he’s worked with.

“You have relationships that you develop over the years,” he said. “It’s hard to calculate what that means to me. I’ve been fortunate to have relationships with players that I still have today. It’s great to coach them as 18-22 year olds, and then have the relationship develop into a friendship as they graduate and go on in life.”

Kreyer said that Kinney gives him resources to do well both on and off the field, which has translated into academic success for many team members. Kinney deflected all praise to the players.

“Our numbers have been consistently top-five percent in terms of graduation and that’s a testament to the players’s work in the classroom,” Kinney said. “I want to be able to attract those guys and be a part of and witness their dedication to that. It’s really special.”

Campbell said choosing Lafayette was “the best decision [he] ever made,” which wouldn’t be possible without his coach.

“When I was in high school, coach Kinney took a chance on a skinny kid who didn’t throw that hard,” Campbell said. “His commitment to me whether injured or healthy, no matter how much or little I could contribute, through thick and thin he stuck with me and I’m forever grateful to him.”

Campbell hasn’t been able to pitch for the team since 2018 due to injury, but he has continued to help the team in a coaching role.

“It would’ve been easy for [Kinney] to kick me to the curb, but it was his idea to make me a student assistant volunteer coach,” Campbell said. “It allows me to wear a uniform, be in the dugout, and travel with the team, without being on the active roster.”

Kreyer said he will remember Kinney’s emphasis on life lessons throughout his baseball career.

“He knows the vast majority of us aren’t going to be playing baseball forever, so when things can relate to life, he highlights it,” Kreyer said.

During freshman orientation, Kreyer was two minutes early to a team meeting, but ended up being the last one there.

“[Kinney] looked at me and said ‘If you’re on time, you’re late. If you’re late, you’re forgotten,’” Kreyer said. “I’ve never been late to anything since then.”

As a veteran leader, Kinney “knows the divide between being a coach and being one of the guys,” according to Kreyer.

“He plays guys he can trust,” Kreyer said. “He talks about that. Every season he’ll pull guys aside and one-on-one he’ll ask ‘Why can I trust you?’ and you have to have an answer for him.”

Honesty is a big point for Kinney, Campbell said. He “instilled in [his players] to play the game the right way and hold each other accountable.”

“[He’s] helped me improve my game and grow as a man,” Campbell added. “He’s preached to us to become a good man, whether it be on the baseball field, in an office, or as a father, he’s taught me not just about baseball, but life.”

Kreyer said the connection will always be there that his class and Kinney are finishing their Lafayette baseball careers in the same year.

“Everyone’s goal is to win the Patriot League,” Kreyer said. “If anything else, there’s more motivation to do that.”

The team has the talent to win the conference, Kreyer added, it just takes time to put it all together.

“We usually play pretty tough teams at the beginning of the year, and we’ve shown that when everything comes together we’re successful,” Kreyer said. “It’s maintaining that consistently is what our focus is on now.”

Campbell said Kinney is “a great coach, but an even better person.”

“I feel like I’m the only player-coach-captain in the country,” Campbell said. “Even though I can’t give coach Kinney innings on the mound, I’m honored to help him as best I can in his last season.”