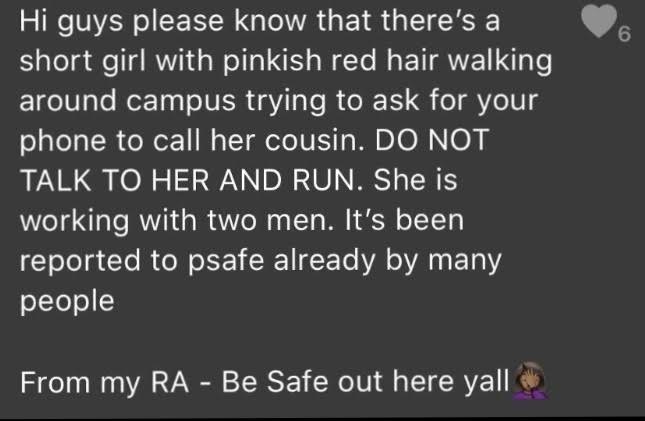 This was one of the messages circulated in group chats around campus on Sunday. (Photo courtesy of Julia Soares ’22)

Rumors of a pink-haired kidnapper preying on students by asking to borrow their phones spread through group chats across campus on Sunday evening. Parents called Public Safety (PSAFE) with concerns about human trafficking near the college and students were advised to turn and run if they encountered the individual.

The rumors, not the reports themselves, were what prompted PSAFE director Jeff Troxell to send out the alert Sunday night.

“Later in the evening, we started getting calls from concerned parents, and then the question to the dispatcher was, ‘I heard there was some attempts of human trafficking going on on campus,’” he said. “And that’s how the rumor mill got started.”

“When we responded [at Skillman], that particular individual was standing outside, and when we approached, they took off and dropped the bag,” Troxell said.

Later in the evening, PSAFE received two more calls from students, reporting that they had seen the pink-haired individual at various locations on campus.

“So it seemed like other people started to remember to recognize this girl with the pink, red hair,” Troxell said. “But the confusion at the root of the rumor that was going around prompted me to send out the message. What started out to be as simple as, ‘Can I borrow your phone?’ got turned into parents calling about potential human trafficking going on on campus.”

“[Both reports of suspicious activity] were not illegal, but then when things started to get twisted around, parents started calling…we were shocked and kind of surprised that, well, how do it get turned into that?”

One message that circulated around campus said the pink-haired woman was working with two men, and was approaching students asking to borrow their phone “to call her cousin.”

“DO NOT TALK TO HER AND RUN” the message read. No other details were given about the individual except their distinctive pink hair, which stood out on Lafayette’s campus.

Despite all the confusion, Troxell said he still appreciated the calls to PSAFE and that the students calling in provided “very helpful information” that helped them to identify the individual.

“We got some good leads that we’re following up on…so always, if you see something suspicious, report it to us,” he said.