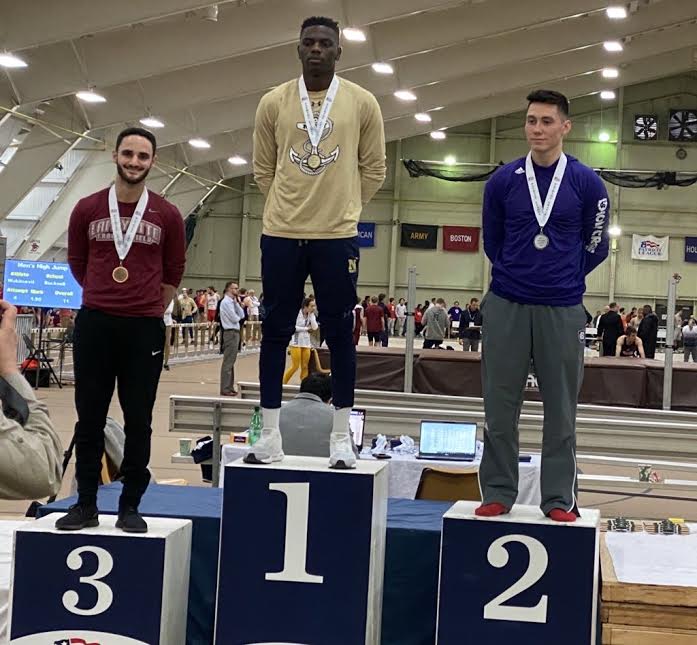 The track and field team wrapped up their indoor season at the Patriot League Championships in Bethlehem last weekend, with senior Tyler Hubeny breaking the school record in the heptathlon for the second time, both in the past month.

Going into the final event of the heptathlon on Sunday, Hubeny had already positioned himself well with a personal best in the pole vault, as well as his best mark of the season in the long jump and second best shot put throw of his career.  He also was just .01 seconds off his career best time in the 60-meter hurdles.

In order to make it to the podium, he had to run at least eight seconds faster in the 1000-meter run than a rival heptathlete from Lehigh.

“I couldn’t see where [the Lehigh athlete] was,” he said. “I could hear my coaches yelling at me with…two laps to go. And as I crossed the finish line, I was thinking ‘oh my god, please let it be enough.’”

Hubeny ended up beating the Lehigh athlete by ten seconds, earning himself a spot on the podium, six points for the team, and yet another spot in the record books. He finished surrounded by his teammates, who had crowded around the track to watch him run.

“This competition was my last one, and it seemed like a good chance…to do really well in the league,” he said. “A lot of things just kind of clicked.”

Also on Sunday, sophomore Autumn Sands took to the track to compete in the 3000-meter run. Her time of 10:53.53 was a personal best and placed her eighth out of 31 athletes.

Sands said she was especially happy to run her personal best time on the Lehigh track, which is not banked, unlike other tracks the team often competes on in the Patriot League. Banked tracks “make you run faster,” she said.

Sands also noted that the atmosphere on the track was very different from other meets the team has attended.

“All parents are in one corner so it…would get so loud when you’d come around the one side of the track, and then it would just be quiet on the other side,” she said. “When people were screaming it was just echoing off the walls…which made it a little more nerve-racking.”

“We call [the Lehigh track] the garage…because the lighting is a little bit dim and the track is brown and it is very small,” she added.

Junior Brian Kaufmann, who competed in the long jump and the triple jump, also noticed the intensity in the Lehigh facility.

“There’s definitely a lot of energy and a lot of people watching and people cheering,” he said. “That’s always fun to be able to jump…in that sort of environment.”

Kaufmann entered the final round of the triple jump on Sunday in fourth place, but finished in third thanks to a career best 14.11 meter jump.

“I just really wanted to put something big out there,” he said.

The top scorers for the women’s team overall were Sands and the 4×400 meter relay team consisting of seniors Kate Mozzochi and Crosby Spiess, and sophomores Portia McKoy and Jill Warabak  (eighth, 4:05.23).

On the men’s side, the top scorers were Kaufmann in the triple jump, senior Calvin Schneck in the mile (seventh, 4:21.48), and Hubeny in the heptathlon. The men’s distance medley team of Schneck and sophomores Greg Bove, Jesse Schmeizer and Brian Clayton finished seventh in 10:18.16, and the men’s 4×400 team of sophomore Chris Baylor, junior John Krase, and seniors Daniel Hogan and Eric Gourdon also finished seventh with a time of 3:32.16.

Kaufmann noted that the team was dealing with multiple injuries going into the championship meet, and that one of the goals for the team was to get everyone healthy for the spring.

“When you have a roster that’s not crazy big and you get a lot of people that are injured, you’re just trying to work past that,” he said. “But I think getting healthy and getting everybody in the mindset to keep competing at that level will be exciting.”

The team gets a few weeks off until their next meet, but many of the athletes are already looking ahead to the spring season. Sands, who primarily considers herself a 5000-meter runner, has high expectations for the meets to come.