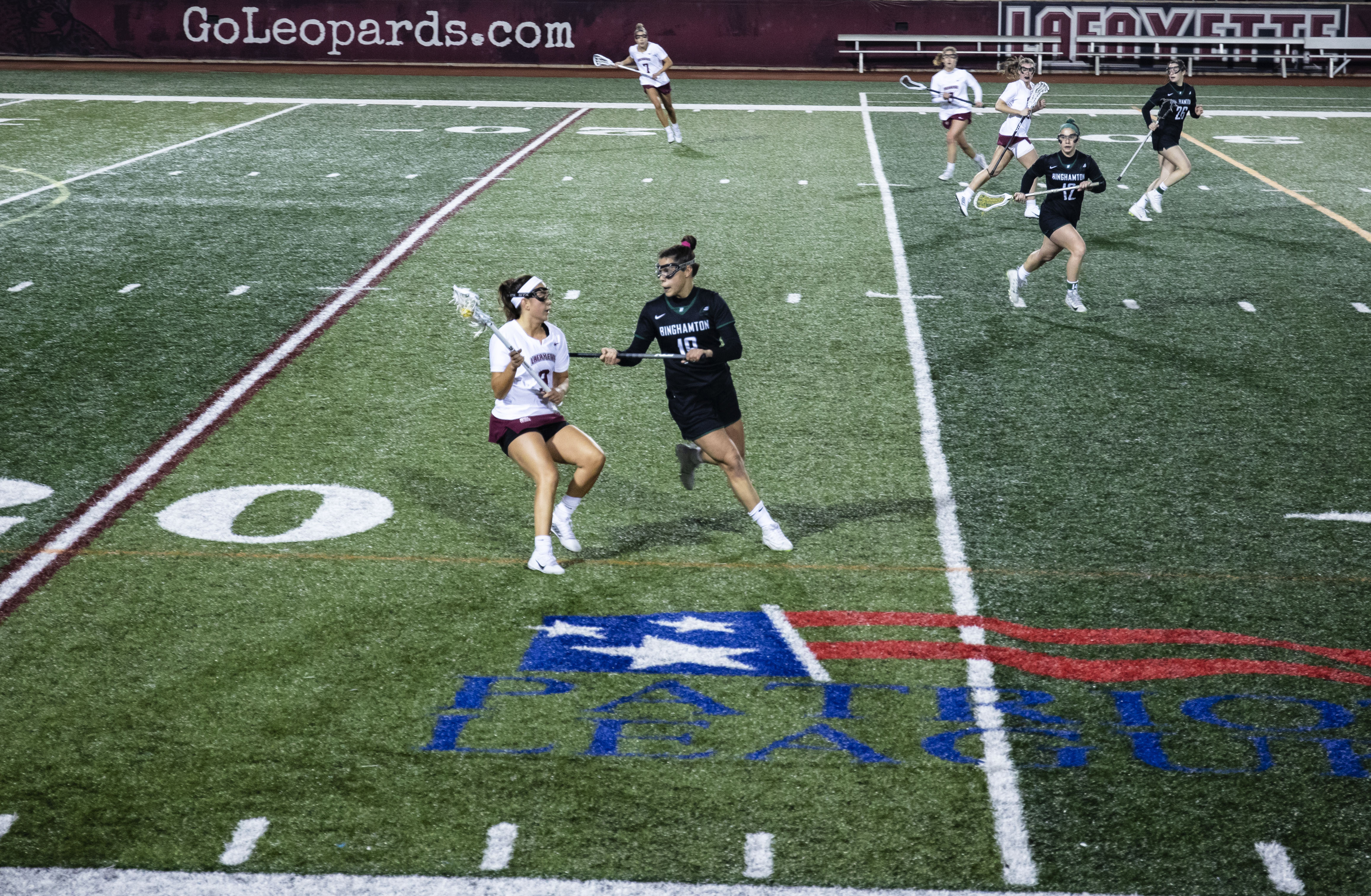 Women’s lacrosse moved to 2-1 on the season after splitting a pair of home games. (Photo by Elle Cox ’21)

The Lafayette women’s lacrosse team beat Merrimack in the home opener last Saturday before losing to Binghamton at Fisher Stadium on Wednesday.

The team now holds a 2-1 record in the early portion of the spring season, with conference play starting in two weeks.

Against Merrimack, the Leopards won 11-8 after relinquishing a lead that was once 8-1. Freshman attacker Meghan McLachlan led the offense with two goals and two assists, a performance that earned her Patriot League Rookie of the Week honors.

Lafayette got right to work in the first half, with junior attacker Anna Stein, sophomore attacker Olivia Cunningham, and McLachlan scoring unassisted goals in the first 10 minutes of the game.

“We got a really quick start,” said McLachlan, the only freshman starter for the Leopards. “We were winning a lot of draws, which gave the team a lot of momentum, and that helped us gain a lot of possessions.”

Lafayette held a 13-8 advantage in draw controls, with junior midfielder Colleen Bannon winning four draw controls of her own.

Merrimack scored their first goal with 16:51 left in the first half, but Lafayette responded with five consecutive goals. Junior attacker Lizzie O’Brien, Cunningham, and senior midfielders Ally Hickey, Katie McDonald, and co-captain Bella Alampi all found the back of the net.

“In general, our offense works really well together,” McLachlan said. “Everyone that’s on the field can contribute in different ways. I personally like to feed a lot, and we have a lot of good cutters, and other people are more drivers, so it all works together.”

Merrimack and Lafayette traded scores as the first half came to a close, with senior midfielder Katie DiMarino scoring with just over a minute left.

“The 9-2 lead at halftime gave us a nice cushion and a lot of confidence going into the second half,” McLachlan said.

Merrimack burst into the second half with four quick goals, shrinking the Lafayette lead to 9-6 with 21:23 still remaining.

“Merrimack was definitely stronger [than Delaware State], but I liked it because the pace of the game was a lot faster,” McLachlan said. “Our team in general is very fast and athletic, so that speed of game helped us play into that.”

“They were a little more intense, and that just elevated the level of play in the game,” head coach Katie McConnell added.

Stein added her second goal of the game with just under 20 minutes left, before two more Merrimack goals brought the score to 10-8 with 12 minutes remaining.

“In the second half they stepped up, and that required us to do so, but I think as the half went on we worked out the kinks and ended on a high note,” McConnell said. “I think it’s just staying composed and confident in what we’re running, and we can work on starting the second half the way we started the game, which is something that will come with time.”

Along with the cushion of goals in the first half, the Lafayette defense helped the team maintain their lead in the second half. DiMarino and Cunningham caused two turnovers each, junior defender Mia Magarro picked up three ground balls, and junior goalie Quinn Lacy had seven saves in the game.

“We didn’t let their second half run get to us. We trusted the practice we put in the entire week, and came together every time they scored,” Scheetz said. “Communication is the staple and backbone of our defense, it’s something we really pride ourselves on.”

McLachlan added her second goal with three minutes left to top off Lafayette’s win, finishing the scoring at 11-8 and capping her case for the Rookie of the Week award.

“It was really exciting, we were happy for her, and she really did deserve it,” McConnell said. “She’s playing into the offense nicely, so it was nice to see her rewarded for that.”

Against Binghamton, the Leopards couldn’t muster enough offense in their first defeat of the season, 9-7. Binghamton led 8-5 at halftime and 9-7 before a scoreless final 23:08.

“The plan for Binghamton was to take a couple more chances defensively, and offensively utilizing everyone out there to the best of their abilities, and to highlight each others strengths,” McConnell said.

“Binghamton is big on crease rolls and cutting, so a lot of what we did on Monday and Tuesday in practice was working on helping really fast from the crease,” Scheetz said.

Next up for Lafayette is a trip to New Rochelle, N.Y., tomorrow for a non-conference matchup with Iona at 1 p.m.