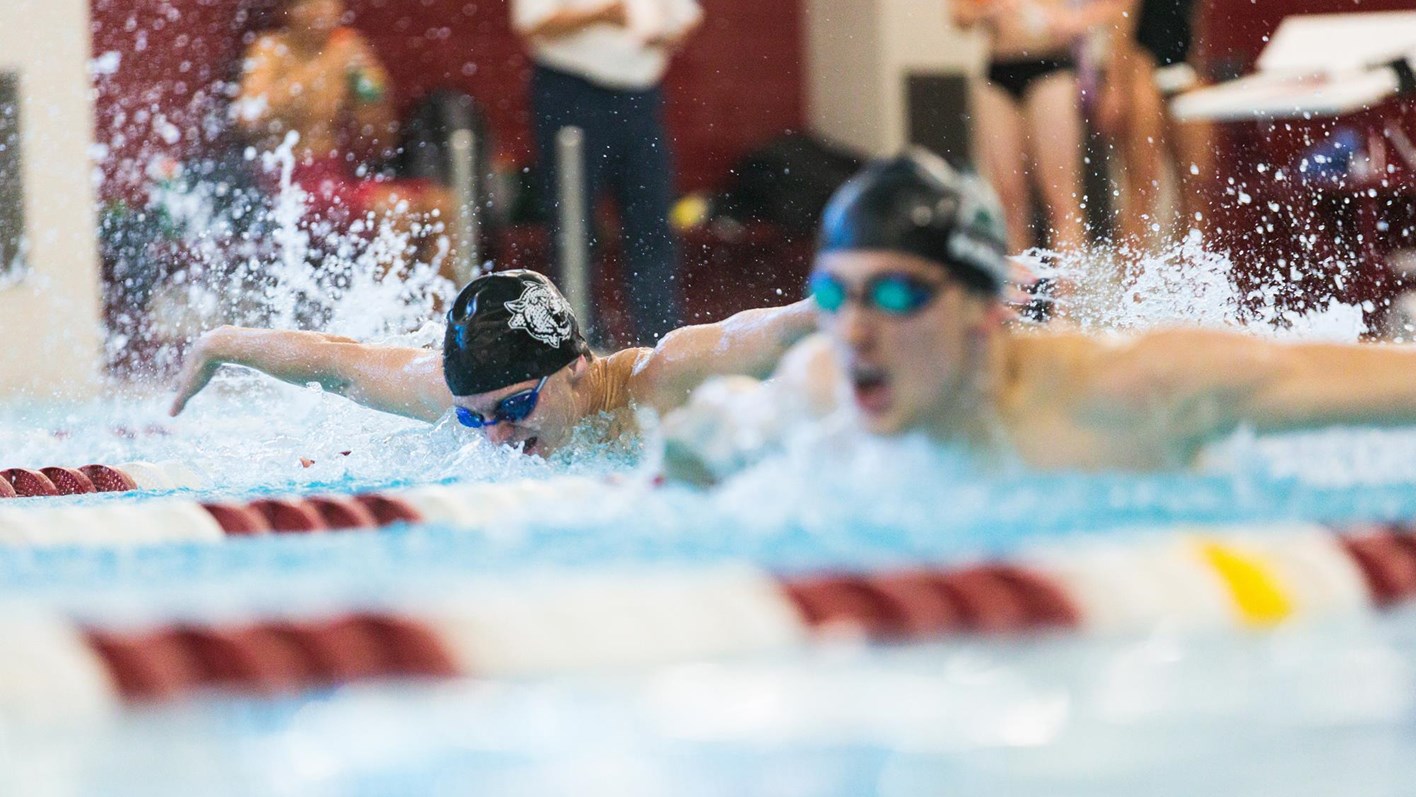 “It was pretty cool,” he said. “But I should have gotten the mile [record], too.”

“This meet is pretty special,” head coach Jim Dailey said. “I think if you’re looking out of all the NCAA Division I conferences, I think the Patriot League is right up there.”

For the men, on the first day of the competition, Lloyd teamed up with senior captain Bryce Currie and freshmen Aaron Tupper and Louis Franzone to break the 800-yard freestyle record with a time of 6:44.95.

Lloyd’s 200-yard split time of 1:40.14 in the relay also broke the school record in the 200 freestyle, while Tupper and Franzone’s split times were good for third and ninth fastest, respectively, in Lafayette history.

“[The meet] started really well,” Dailey said. “And when you start well, it ends well.”

Lloyd got right back to work on the second day of the championships, with another record-breaking performance in the 500-yard freestyle in 4:32.49.

“It’s good to get [the record] off my chest so I don’t have to worry about it anymore,” Lloyd said. “I can focus on setting goal times and making those records even faster next year.”

The Leopards broke two more school records on the third day of the meet, and barely missed out on several more.

Gorgan, Franzone, Currie and Tupper broke the 200-yard freestyle relay record by just 0.09 seconds, earning seventh place overall in the event with a time of 1:23.56.

“It feels awesome to finally have my name on the board,” Gorgan said. “It’s always exhilarating when you’re part of a group and you get a team record.”

The group of Lloyd, Currie, Franzone and Tupper set the fifth and final school record for Lafayette on Saturday, the final day of the meet. The team came in sixth in the 400-yard freestyle relay in 3:04.46.

“[Tupper’s] relay splits were much better than his regular races, so that was really cool to see him drop some insanely fast times on the relays,” Lloyd said. “He did a really good job anchoring those relays and swimming really fast.”

The women’s 200-yard freestyle relay team of sophomores Samantha Talecki, Tara Leininger and Emily Wilson and freshman Margaret Champagne nearly broke another school record at the championships. Their time of 1:37.07 was less than a second off the record, and earned them eighth place in the event.

“We missed another four records by less than a second,” Dailey said. “It will be a bunch more next year, we’ll break all the ones that we broke this year plus the four that we didn’t.”

Also for the women, junior Maya Imperial is now the fourth fastest swimmer in Lafayette history in the 400-yard individual medley with her time of 4:37.64.

Freshmen Haleigh Marzano and Lindsey Monaco both now sit in seventh place in the all-time top-10 list for the 100-yard breaststroke and 100-yard butterfly, respectively. Marzano also competed in the 200-yard butterfly and set the second fastest time in Lafayette history in the event.

“It was exciting that you could see them get their goal and just finally feel completed and happy about it,” freshman Sydney Perks said.

“The mile was definitely a good swim for me, I’ve never really done that event before,” she said. “[Dailey] thought I could be good at the mile, so I just did it and it went a lot better than I was expecting.”

Other near-record breaking performances for the men came from none other than Gorgan, Tupper and Lloyd.

“I had no idea I would drop that much time in my 100 breaststroke,” he said. “And my 200 breaststroke was later in the week, so I felt like I could’ve done a bit better but I’m overall very happy with both of my events.”

Gorgan now trails Greg Grewal in both events on Lafayette’s all-time top-10 list, and needs to drop just a few seconds during his junior or senior year to clinch the records.

“[Gorgan’s] following along in the footsteps of Greg Grewal, who graduated in 2016 [and] reset our records from our past Olympian Andrew Rutherford ’94,” Dailey said. “And right now Gorgan is kind of on pace to be like Greg. And Greg made 2016 Olympic trials.”

Gorgan also made the ‘B’ finals for the 50-yard freestyle with a time of 20.93, good for third all-time in school history. Gorgan and Tupper’s split times in the 400-yard medley relay place them second all-time at Lafayette in the 100-yard breaststroke and 100-yard freestyle, respectively.

While both teams showcased record-breaking performances at the championship meet, Dailey thinks the programs’ best days are ahead.

“With our performances and our top-five times that our recruits have it’ll change the trajectory of our program substantially,” he said.

Reflecting on a full season’s worth of work, Dailey said that finishing the season with new school records was the right way to go.

“The whole [season] you can’t lose sight of your goals,” he said. “And then the end of the year when all that comes together, well that feels pretty good.”