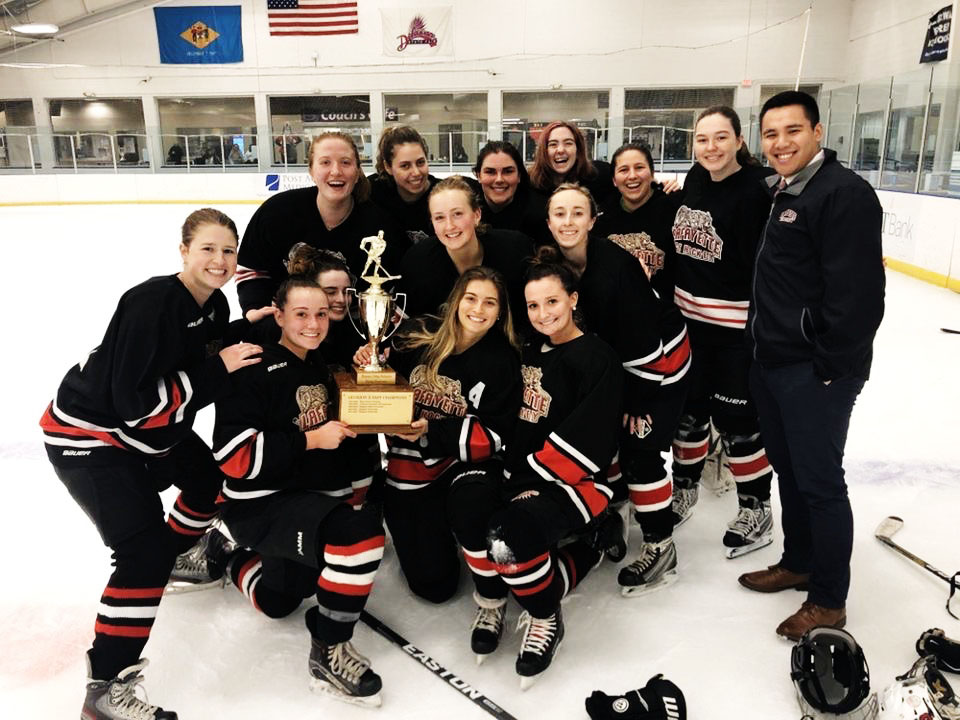 Freshman center Genevieve McClean circled in the offensive zone looking for an opportunity to strike. Senior center Faith Price screened the goalie as McClean skated back between the face-off circles, and it was all she needed. She flicked a top shelf goal on the right side of the net to clinch the championship for Lafayette women’s hockey.

It took four overtimes, 77 minutes, and 99 shots combined by the two teams. In their third season since the Lafayette women’s hockey club was created, they toppled George Mason 2-1 for the Delaware Valley Collegiate Hockey Conference (DVCHC) Division III championship.

“At first it was just like ‘thank god,’ because we’d been playing for so long,” freshman center Leslie Phillips said. “We were so pumped not only because we were the underdogs going into it, [but] we played George Mason earlier in the season and lost 4-1. It was very exciting.”

Phillips got Lafayette on the board midway through the first period, with freshman defender Layla Ennis and senior defender Elise Bossert earning assists on the tally.

“I was in front of the net off to the side, and [Bossert] passed to [Ennis], who shot it to the goal, but off to the side where I was, and I hit it right off my stick and it went in.” Phillips said.

George Mason tied the game up halfway through the second period.

“Even though they tied it up, I still felt that we were going to pull through and win it,” McClean said. “We spent a lot of time in their zone. We had a ton of shots on their goalie. We had them pinned to a certain degree, even if we didn’t put one in the net [we] kept the pressure up.”

In the third period, Lafayette had to survive a five-on-three power play, but came away unscathed. Price went to the penalty box after junior winger and alternate captain Renna Thomas got hurt in the game.

“I got hit pretty hard and came onto the bench with an injury,” Thomas said. “I’m okay, but I think it fired the team up a little bit because it seemed unfair to have an injured player and someone in the box. We knew the stakes were high at that point.”

Less than a minute later, McClean took a minor penalty of her own for a hit on a George Mason skater.

“You always feel kind of bad and guilty going to the penalty box,” McClean said. “We were freaking out a little bit because we put the team in that position.”

“It felt like an eternity,” she added. “Watching it happen, and not necessarily wanting to be the one out there, but putting your team in a stressful situation.”

Thomas said she had the team do breathing exercises to keep calm heading into overtime.

“I’m not really the strongest skater, I’m in this position because I have a level head, and I’ve always tried to keep the team mentality up,” she said. “We’ve played a lot of games where we’ve needed that. It was such a mentally tough game.”

Junior goalie Maria Giambruno-Fuge registered 45 saves in the final. She earned the win in Lafayette’s 7-2 victory over Indiana University of Pennsylvania (IUP) in the semifinal with 10 saves as well.

“The [semifinal], I don’t think I played very well,” Giambruno-Fuge said. “The two goals [IUP] scored were probably goals that shouldn’t have gone in. Going into the final, I think I was a bit more focused and ready. I think I was seeing the puck pretty well. I was lucky because the defense was really good at clearing rebounds.”

“[Giambruno-Fuge] played insane,” Phillips said. “She definitely was the star of the game. She had some insane saves.”

Giambruno-Fuge said she was nervous for overtime, but recognized that everyone on the team was feeling the same pressure. She also said the cheering on the bench helped her.

“The very first set of overtime, [George Mason] had the puck, and it was only 40 seconds in, and they made a pass across the crease,” she said. “I thought they were going to score off of it, but it hit my pad.”

The Lafayette defense held through a four-on-four overtime, and the better part of three 10-minute three-on-three overtimes until McClean potted the championship-winner. It was her fifth goal of the two-round playoffs.

“Our team has really been working on defensive zone breakouts, which centers play a big role in,” McClean said. “Being able to break out of the zone gives us potential to break into the offensive zone and score.”

“The goals are attributed to me, but I didn’t do them myself,” she added. “The whole team was really helpful, and integral to them happening.”

McClean had the first two goals for Lafayette in the IUP game, after the Leopards went down 1-0. Senior forward Mackenzie Sangster broke the tie toward the end of the second period, and it was all Lafayette in the third with two more McClean goals, and scores from Price and freshman defender Sara Graham. Phillips had three assists in the game and Graham added two.

The playoff success came as an immediate improvement on the team’s two inaugural seasons, both of which saw them win just one game.

“It definitely feels rewarding,” Giambruno-Fuge said. “Your hard work is paying off for the game. It feels rewarding since we put in the same amount of effort as we had in the past but we’re getting results.”

This season, the team’s top three scorers in the regular season were all freshmen: McClean and Ennis with 10 each, and Graham with seven.

“There were also a lot of returning players who were open to having new people on the team and ready to work with them and improve, and build off of each other,” McClean said. “Having a dynamic where we could all find our place on the team and work well with each other solidified the team from the beginning to have a foundation we could work off of.”

Through the success, McClean and Thomas said the club members are still having fun and developing friendships.

“We’ve come together as a team off the ice the strongest this year,” Thomas said. “It’s been the biggest year of getting to know each other and making those plays, whether it’s a girl who’s been playing for 10 years or for two.”

The team’s founder, Amanda Grisanti ‘19 wrote in an email that she’s “extremely proud” of the team, especially after they lost some senior leadership at the end of last season. McClean added that having a women’s hockey team was one of the attractions of Lafayette when she was choosing where to go to college.

“It’s given me the comfort that the team is going to continue for many years to come and the fact that they won the championship in only their third season is mind blowing,” Grisanti wrote. “The team can only continue to grow in success, and I am beyond excited to see what the future holds for this amazing team!”

Wonderful article. The goalie for Lafayette is my neice. Great win