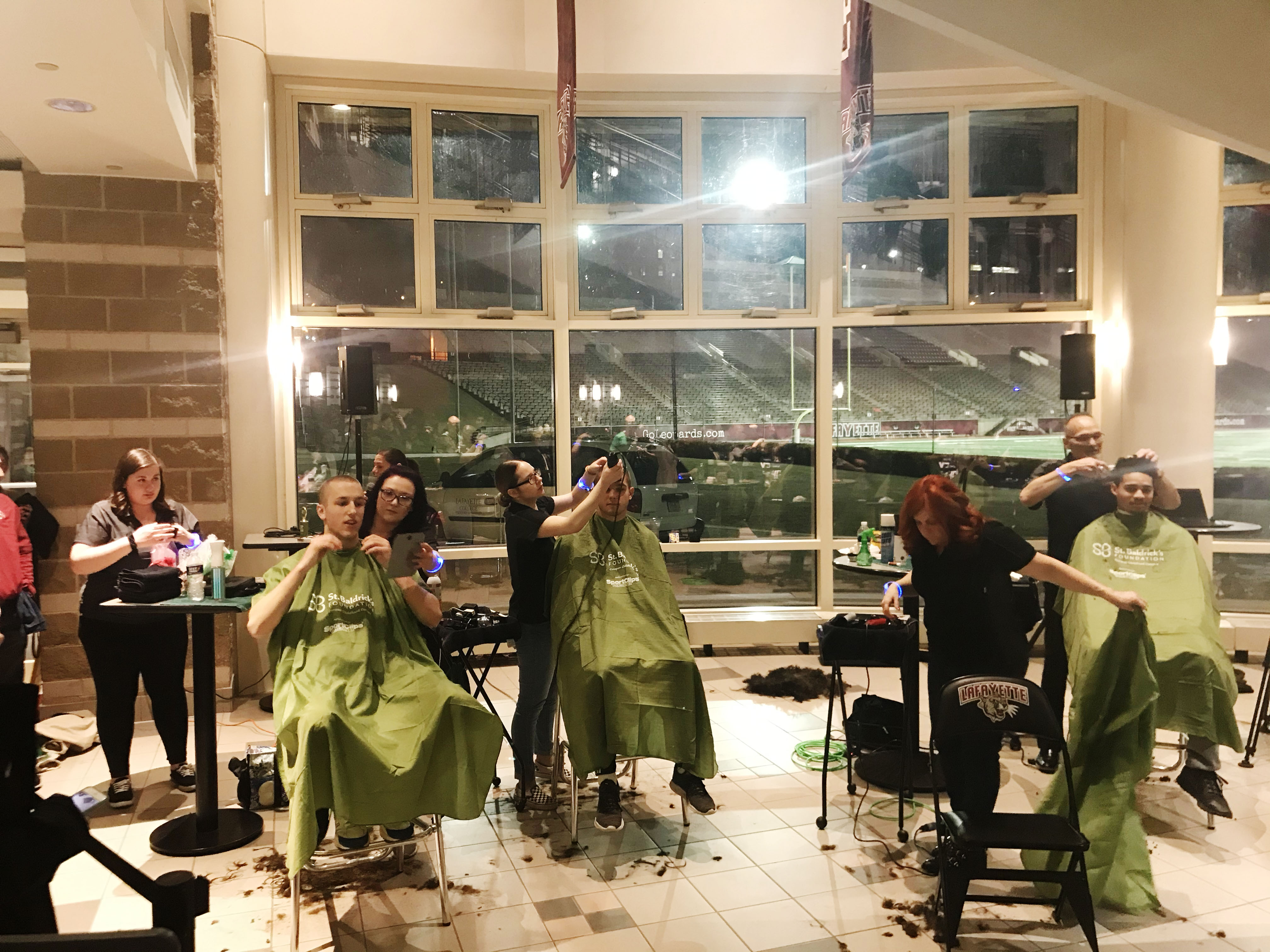 The Lafayette lacrosse teams combined to raise over $4,000 for the event. (Photo by Andrew Hollander ’21)

David Heard was going to be a DJ, a fashion designer or a brilliant scientist.

But when he was diagnosed with neuroblastoma in 2008, David became a fundraiser for pediatric cancer research, a legacy that lives on today despite his tragic passing in 2011. David was only 10 years old.

“One of the things that I often feel sad about or think about is gosh, what would he have become?”

David’s mother, Susan Heard, still does not have an answer to that question, but she is committed to fulfilling David’s wish to help other children like him.

“When David got sick, he was given a lot of presents,” Susan said. “And he said, ‘this is weird mom, why do people keep giving me stuff? Shouldn’t we do something that makes a difference?'”

Say no more. The Heard family has raised more than $600,000 since 2011, and a large part of their success has come from the annual “Big Shave” event held in Kirby Sports Center. Volunteers secure pledges from donors to shave their head, and all proceeds go to David’s Warriors, a hero fund in his memory set up through the St. Baldrick’s foundation website.

“The idea of the event is to raise money for pediatric cancer research, because it is so horribly underfunded,” Susan said. “The piece of the pie that’s given to pediatric cancers specifically is not anywhere near what it needs to be in order to really generate cures or better treatments.”

The idea of funding groundbreaking research across the country was none other than David’s.

“His focus was really ‘let’s get more money in the hands of researchers, and let’s get some cures for kids like me,'” Susan said. “He was 10, and that’s literally when he was dying he gave me this list of things he wanted me to do, and that was his thing. He’s like ‘you need to fund more research for kids.’ It was one of those moments where you’re like ‘this kid, what a loss to society.'”

The Big Shave event began in 2013, and has continued every year with varying levels of success. A lot of students were participating in the family’s “National Crane Project,” an idea of David’s in which origami crane mobiles are placed in pediatric cancer centers around the country to “inspire hope for healing.” According to Susan, lots of student-athletes participated in the project which is how the event turned into an annual affair.

“[David] really connected with the students, and I think the students were wanting to do something philanthropic,” she said. “They decided that this would be their way of giving back to the community.”

This year, The Big Shave saw its best turnout to date. 13 varsity teams are registered for the event, in addition to a handful of other donors including the Chi Phi Rho chapter, which has raised over $1,300 alone.

“And this year, I’m stunned,” Susan added. “All of the teams are registered…but that’s the fun, teams can compete against each other in a way that everybody wins, right? Because the idea is to raise as much money as we can for cancer research.”

The Big Shave event has often been closely connected with the men’s lacrosse team, who have spearheaded the fundraising and shaving efforts during the past few years. As the coaching staff changed over the years the event faded slightly, but it has seen a resurgence since head coach Pat Myers took the reins of the men’s team in 2018. It all started with his discovery of a team award called the “David Heard Unsung Hero award,” which is presented at the program’s annual banquet.

“I met the Heard’s, we brought them into the fold and invited them to our team banquet my first fall here to present that unsung hero award,” Myers said. “We got to know more about their story, about their son’s story and about the pediatric cancer research that St. Baldrick’s does and they told me about The Big Shave. I know it’s something that our team had taken pride in prior to me even being here. We’ve tried to take it up to another level in terms of supporting that cause.”

The men’s lacrosse team had raised $2,854 by Wednesday night as the donations continued to trickle in, and the women’s lacrosse team helped raise an additional $1,580. The event brought in well over $17,000 for David’s Warriors, with over 60 people shaving their heads.

“This is his legacy and what he wanted was to raise money,” Susan said. “It’s like everybody is saying ‘yes, we hear David’s final wish and here we are. We’re delivering on that.”

Holding the event at Lafayette holds a special significance for Susan and her husband Tom Heard ’91, as they live on College Hill and fondly remember David attending sports games at the school throughout his life.

“David will always have his connection to Lafayette no matter which students are there,” Susan said. “His being can exist in the Lafayette space in such a beautiful way.”

“David was very special to many,” said Celeste Langen, a development technology specialist at the college and a close family friend of the Heard’s. “Their journey has not been easy, and we hope that what the community has done along the way has helped ease their grief. One thing that has been amazing throughout has been the family’s approach. It’s been real and raw, but extremely positive.”

Although February has typically been a difficult month for the family, with David passing on February 10th and Susan’s birthday on the 13th, The Big Shave event has begun to turn the tide.

“It is a very touching and incredible gift that we get every year from students who get involved,” Susan said. “It’s a way to remember David and his legacy and to keep fueling what he wanted.”