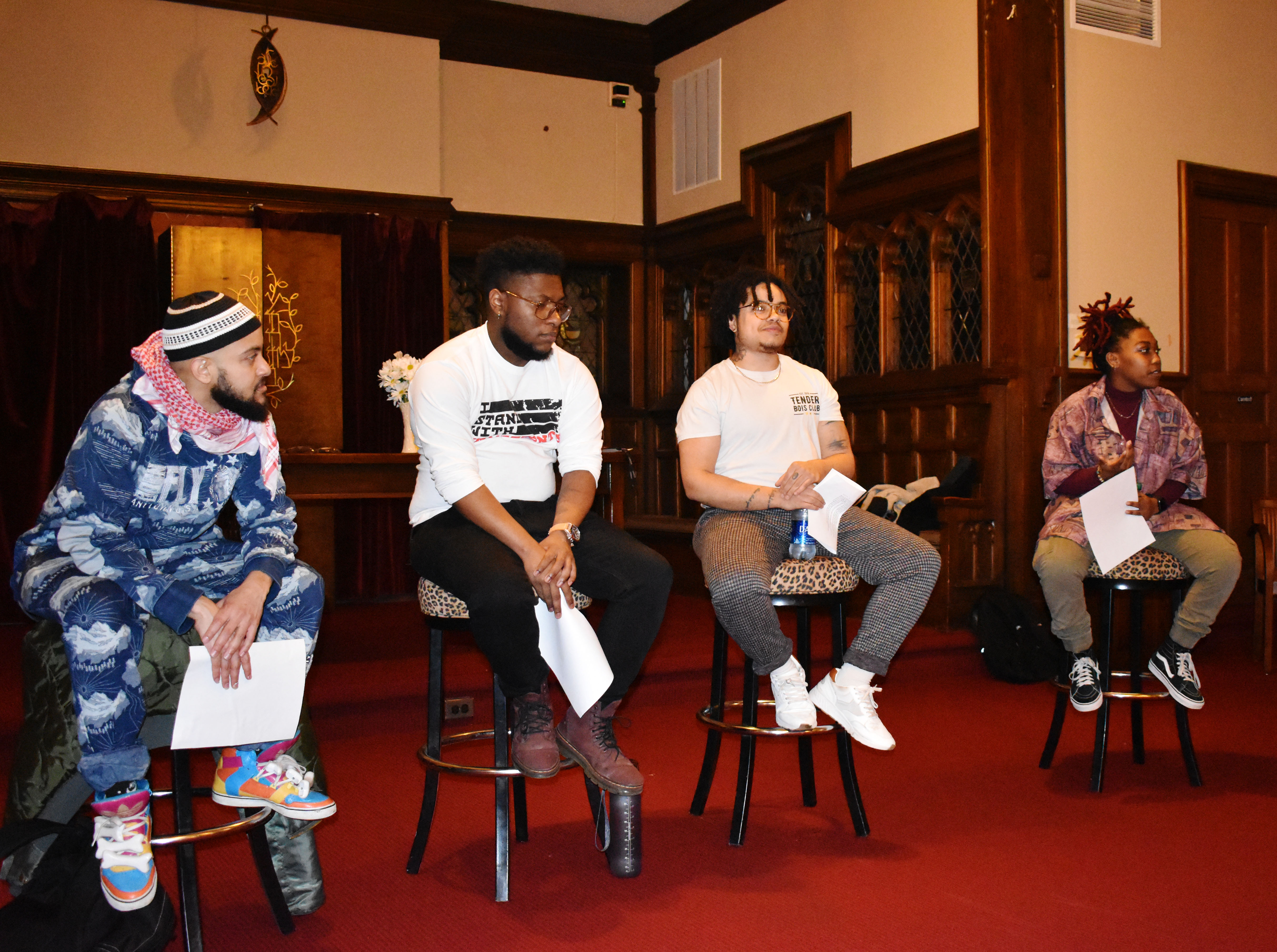 Panelist Bryan Fox ’10 said he has noticed an increase in diversity at Lafayette, but that the college should diversifying its pool of students. (Photo by Andrea Collazo-Salazar ’23)

The campus community gathered last Tuesday to listen to the diverse journeys of three men of color who openly identify as transgender. The discussion was facilitated with a concentration on blackness, masculinity and the trans identity. Grayce Walker, Treasurer of Queer People of Color, led the discussion.

“I don’t think many people recognize that having three, out trans men of color isn’t ‘normal’ in one room,” said Grayson Thompson, Assistant Director of Intercultural Development and Coordinator of Gender and Sexuality Programs.

The discussion began with Wazi Maret, an entrepreneur from Brooklyn, who recalled that when he was young, he initially identified as ‘masculine of center’ before he identified as a trans man.

“For as long as I can remember, I just remember this dissonance between how my body looked and how I felt intuitively,” Maret said. “Anything associated with men or associated with boys, I was in it, I was feeling it, but things that I guess were associated with women or labeled ‘girly’, I wasn’t really feeling that.”

Bryan Fox ‘10, an artist from the Bronx, said that he grapples with understanding transmasculinity, which is similarly rooted in the socialization he experienced as a child.

“I didn’t acquire the socialization that cisgender men acquire. They are socialized in a certain way, and I didn’t get that,” Fox said.

Thompson added that part of forming his identity as trans included crafting his own definition of transmasculinity.

“Something that I’ve learned along my journey is how I can still be authentic to who I am because I am not the butchest dude,” Thompson said. “I still feel like this is my manhood, and that’s okay if it confuses you.”

Thompson, Maret, and Fox agreed that a majority of the masculine figures they were influenced by when they were young were their family members. Fox described how some aspects of masculinity that his male family figures portrayed were positive, but many were toxic.

“Every man who I come in contact with is who is comfortable with it I hug,” Thompson said. “I know that I’ve had the privilege of letting other men love me, and I know there are black and brown boys at this school who’ve never had a man care about them.

All of the panelists agreed that they are oftentimes treated differently after people learn their gender identity.

“In the morning time, somebody could have perceived me as a cis black man but by lunchtime somebody is looking at me, thinking that I’m like, a woman but like a butch stud woman, you know?” Maret said.

Fox, who practices Islam, said he feels that he has certain privileges since he is able to attend mosque and still be able to “pass” as cisgender.

“I don’t have to deal with the kind of antagonism at times from people who don’t understand,” Fox said.

All panelists underwent hormone replacement therapy, and quickly noted changes after therapy started. Thompson said that in terms of new physical manifestations of gender, he specifically wanted to grow a beard. Fox agreed that he always wanted a beard and broader shoulders, and Maret said that his hair has become a form of self-expression for him after his transformation.

“One of the most fascinating changes physically is the body fat distribution,” Fox said. “After starting therapy the fat doesn’t distribute itself to places where it would normally distribute in a woman, it just changes to more like that of a male, and that was good because I wasn’t crazy about the curviness of my body.”

The panelists went on to discuss how racial identity can become intertwined with their trans identity.

“I think it’s interesting that when watching some white trans men, there’s still this femininity because in terms of race and masculinity versus femininity you see a reflection,” Fox said. “Whereas darker flesh is associated with the masculine and fair complex is more associated with the feminine, and I think that they’re not as threatening black trans men.”

Fox said that he has noticed a better sense of diversity on campus since he graduated ten years ago, but that the college still needs to continue on a path of diversity.

“I think just to continue with diversifying the pool of students, because with that archetypal student that Lafayette picks, there will always be that atmosphere of white supremacy, this kind of smugness that of some of the students, the young guys here have,” Fox said.

The panelists were chosen with diversity in mind, according to Thompson, in order to include transgender men from different professions, and emphasize the fact that trans people of color face a higher rate of unemployment, homelessness, and discrimination.

To Thompson, Maret, and Fox, their inspirations are what keep them driven. Thompson said that his students inspire him every day, Fox has turned to his faith for inspiration, and Maret is inspired by his friends and family.

“I’ve healed from a lot of things, and I have a lot more self-love. Every day, I inspire myself,” Fox said.