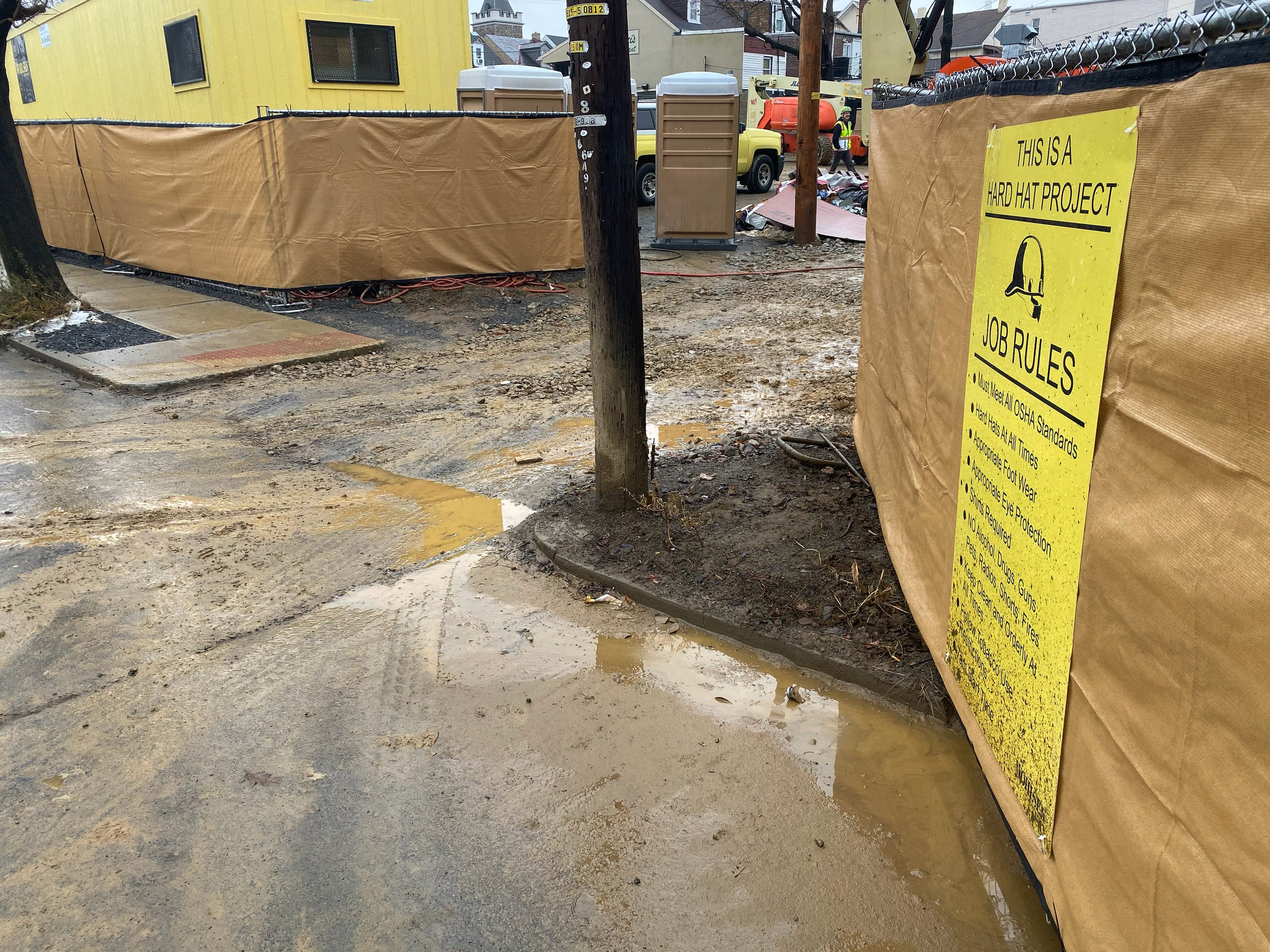 Mud accumulates due to rain on the street outside of an entrance to the McCartney Street Dorm construction site. (Photo courtesy Sharon Engel ’22).

After a rainstorm, the streets around the McCartney residence construction site are often streaked with brown stripes and covered in streams of muddy water. This runoff is more than a nuisance to pedestrians, however, as it can be damaging to local ecosystems if not regulated properly.

Lafayette’s commitment to sustainability and environmental protection has become a priority in recent years, as seen through the college’s plan to reach net-zero carbon emissions by 2035. Despite this, less emphasis has been placed on sustaining local ecosystems in and around the college, as evidenced by recent violations in erosion and sediment management at the McCartney construction site.

The McCartney Street dorm project started in May of 2019 after the contracting of Wolhsen Construction, and was contracted out to Radnor Property group who will own and operate the building when it opens next fall. As is the case with any construction project, large amounts of soil have been disturbed in the early stages of building.

Sarah Blitz ‘20 said that she has seen “pools of water and muddy runoff,” and has had to avoid stepping in “muddy puddles” as she makes her way to her apartment above Campus Pizza across from the construction.

This issue is scientifically known to be devastating to aquatic ecosystems, and has been occurring for months at the site.

According to The Encyclopedia of Earth, runoff from construction sites is harmful to the waterways it flows into. Stormwater polluted heavily with sediment torrents downhill into storm drains, which empty into the Bushkill Creek, a tributary to a drinking water source for millions of people: the Delaware River. Any additional pollutants present in the disturbed soil such as litter, chemicals, or vehicle discharge are also washed away with the soil.

Large amounts of sediment in waterways are also detrimental to aquatic life, especially those dependent upon photosynthesis. Sediment clouds water, which prevents sunlight from penetrating and effectively starves photosynthetic organisms. Sediment can also damage the gills of fish, and drastically reduce the level of dissolved oxygen which all aquatic life depends on.

The “Best Management Practices” (BMPs), laid out by the Pennsylvania Department of Environmental Protection, consist of specific methods to prevent sedimentation of local waterways and prevent potential degradation to environments surrounding construction sites. For example, silt fences prevent sedimented water from escaping the construction site, trackpads clean vehicles’ wheels of sediment before they exit the site, and street sweeping cleans up curbside soil before it is washed downhill.

According to documents from Northampton County Conservation office, many BMPs were a part of the initial plan for the McCartney construction, but were either abandoned due to lack of space or due to not being effective in controlling sediment. Specifically the “failure to maintain rock construction entrance per plan,” was noted as a violation in the project’s January inspection records.

In response to the violations presented in these documents, Roger Demareski, Vice President of Finance and Administration, said that when district officials visited the site in October of last year for an inspection, no issues were found, however, a violation was issued when another inspection was performed this last month.

“We have been working very closely with the Conservation District.  They have been pleased with the work and have acknowledged the balance given the tight site access,” he added.

Both Demarski and President Alison Byerly commented on the close relationship that Lafayette College maintains with Wohlsen Construction, noting that they continue to monitor the status and quality of the site.

As Lafayette continues to expand the borders of campus into the surrounding city, future site management and adherence to BMPs will play an important role in the college’s commitment to sustainability.

View all posts by Elena Dodge →

View all posts by Sharon Engel →