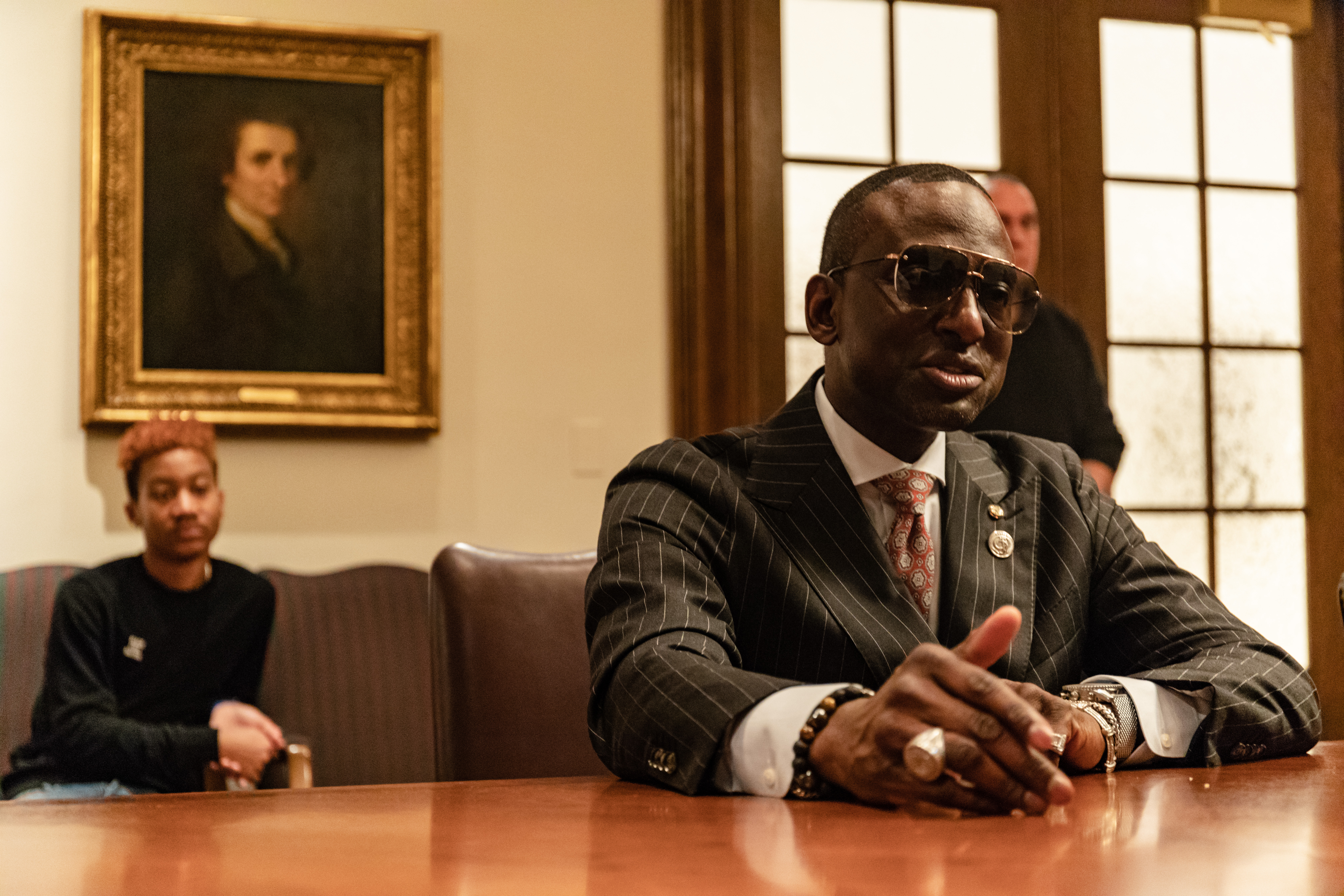 Yusef Salaam was one of five young black and brown boys from Harlem wrongfully accused of rape and assault in the 1989 Central Park Jogger case. (Photo by Elle Cox ’21)

As Black History Month is celebrated this month along with Criminal Justice Awareness Week, the Office of Intercultural Development, Association of Black Collegians (ABC), and many other student organizations, came together to invite activist, poet, public speaker, and one of the Exonerated Five of the 1989 Central Park Jogger case, Dr. Yusef Salaam, to campus as a keynote speaker.

In relation to the event, Tyler Cook ’21, president of ABC, mentioned the Office of Intercultural Developments’ effort in bringing Salaam to campus, noting how important their collaboration was, as well as the event’s connection to the history of ABC.

In May of 2019, the globally acclaimed series ‘When They See Us’ took to Netflix to retell story of the ‘Central Park Five’, five young black and brown boys from Harlem, NY wrongfully accused of brutal rape and assault.

The events that unfolded during the case led to the boys being exonerated after 12 years, with all of them serving 6-12 year sentences, and struggling with the repercussions of the case.

Salaam’s journey through these recent college tours are more than an opportunity to encourage active conversations around Blackness and the justice system, they are efforts to give first hand accounts of the flaws of the justice system and to encourage movement and change, starting with younger generations, he said.

Before his speech, students from ABC and a few faculty were given the opportunity to meet Salaam and ask him personal questions about his journey as well as ways to combat the difficult realities many people of color face.

As questions began to become more personal and emotional, Salaam responded to the fear of raising children of color in today’s society.

He mentioned the importance of remembering one’s purpose and mission, and for everyone to not allow “F.E.A.R. (false evidence appearing real)” to discourage the ability to bring beauty and power into the world.

These sentiments were echoed in his speech to the larger community, in which for a moment, he performed for the audience the same powerful written rap he had presented to the jury as a young boy.

Salaam recounted how his passion for poetry and his faith aided him in his darkest days as a young inmate. Those moments he recounted gently, and he urged everyone in the chapel to “do better” and recognize the damaged justice system.

The talk began to take a slight turn when a question was brought up about now President Donald Trump’s full-page ads from a 1989 newspaper titled “Bring Back the Death Penalty! Bring Back Our Police!” and how these played a role in the public’s perception of the case.

Salaam held up the ad for all to see replying,”You’re talking about this?”

He recounted how the boys and his addresses were put in the paper and how the ad sent fear into their hearts for what the retaliation may be.

By the end of the talk, Salaam reminded everyone that the most powerful hold on the state of the country is the ability to vote and to take action. He highlighted the importance of allies using the privilege they may have to gain access into certain spaces, and encouraged everyone to plant positive seeds in the upcoming generations.

He gave an idea of how those seeds could be planted: “We don’t see the good cops go viral,” he said, reminding the audience that law enforcement is not a lost hope, and change is possible.

With a final declaration, Salaam looked around at the eyes of the packed chapel and reminded them that “we can do anything.”

Does no one fact check/vet anymore?