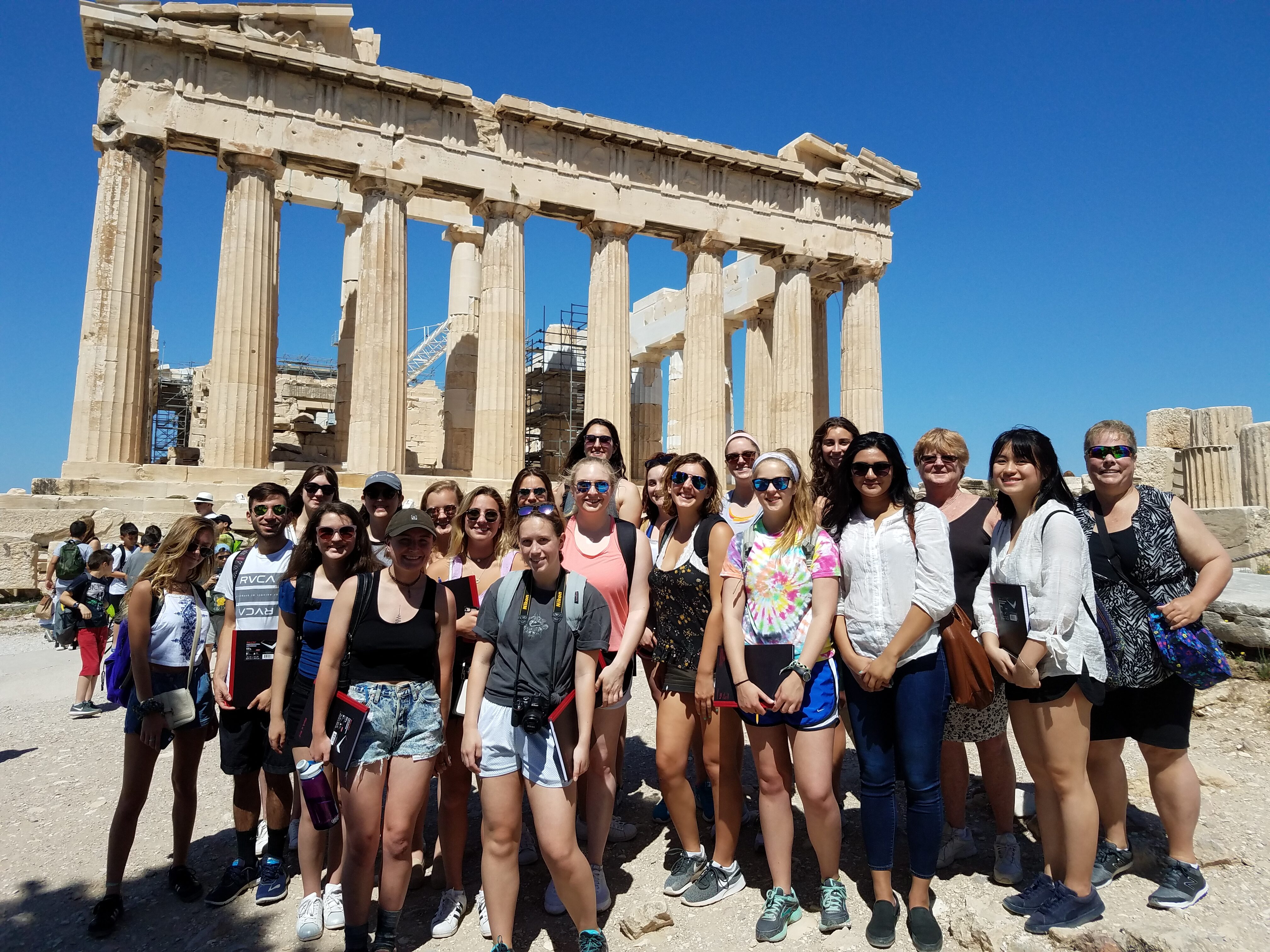 Professor Deborah Byrd ran the college’s study abroad program in Athens, Greece from 1994-2004, taking students on field trips to locations such as the Parthenon. (Photo Courtesy of Deborah Byrd)

For some students this fall, classes will be taught with fewer PowerPoint presentations and more Parthenon demonstrations.

Beginning in the fall of 2020, the college is once again offering its study abroad program to Athens, Greece. The program, which is a partnership with the College Year in Athens (CYA) program, will be led by English and Women’s and Gender Studies professor Deborah Byrd.

The collaboration between the college and the program allows for flexibility and support in planning both academic and sight-seeing ventures.

Byrd will teach a required class called “Gender, Race, and the Classics: Modern Responses to Ancient Greek Texts” which will include reading tragedies and discussing how modern writers, particularly women writers and writers of color, have reworked the stories. Byrd said she is hoping to take her students to some theatrical performances to accompany this coursework.

The program also offers additional coursework in most humanities and social sciences fields, allowing students with a variety of majors to be able to attend.

“One of the cool things is that a lot of the courses are taught on site. You don’t look at slides, you go there,” Byrd said.

In the first week of the program, students will participate in orientation activities such as neighborhood walks, where they will learn where the grocery store, laundromat, and some restaurants are located. They will also travel to Delphi to see the Temple of Apollo.

Throughout the semester, students also go on three-five day trips to Delphi, Peloponnese, and Crete Island. The trips, according to Byrd, are included with their tuition.

Outside of the classroom and program-led field trips, students will also have the opportunity to explore Athens and other locations in Greece and around Europe on their own.

Byrd explained that the city has a helpful metro system that was developed in 2004 when the Olympics were held in Athens as well as an extensive bus system, but that it is also “very walkable.”

Students will have free time to go to the beach and explore the Greek islands at the beginning of the semester when the weather is warm. They can also travel to countries such as Egypt, Turkey, and Cyprus without spending too much money, Byrd said.

Byrd added that Greece is relatively inexpensive, especially Athens, when compared to cities such as Paris or London.

Students will pay their usual college tuition and fees for the program. Because students will not pay for activity fees and lunches during the week, and the cost of living is lower in Athens than in many other European cities, the program is a little more cost-efficient, according to Byrd.

During the semester, students will be staying in apartment buildings, stocked with a full kitchen, in the heart of Athens. Buildings are usually about five or six stories high and usually have three to five students per apartment, mostly in doubles, with occasional singles.

While the trip may seem to be all planned out already, it can take many unexpected turns, leading to spontaneous and unique experiences, according to Byrd, who ran the program from 1994-2004 before it’s 16-year hiatus.

Byrd recalled how on one visit to Olympia, she was able to find at the last minute a taverna that provided Greek music specifically for the students and also taught them Greek dances.

Another time, she was able to bring her students to an exhibit in the back of a museum in Santorini that was not on display for the public yet due to her connections with CYA.

When Byrd ran the program previously, she would take around 16 to 18 students every other year. She stopped running the program in 2004 when her son who traveled with her had grown too old to miss school for so long, Byrd explained. Additionally, she said because it was soon after 9/11, and there were many parents who were uneasy about sending their children anywhere near the Middle East.

In 2016, she began a three-week long interim program that ran during the first weeks of June, but she said she missed the semester-long program and decided to restart it next semester.

Before she came to the college, Byrd lived in Greece for three years, where she “fell in love with the country.”

“[Living in Greece] gave me a sort of comfort level, because I had taken the equivalent of first-year Greek when I was there. I was teaching on a military base, went to about 30 of the islands, traveled all around the mainland, knew the food, knew the customs and just had a good sense of the culture,” Byrd said.

This trip will be offered every other fall. There will be an information session about this program today at 4:15 in Pardee 101. For any further questions, contact Deborah Byrd at byrdd@lafayette.edu.