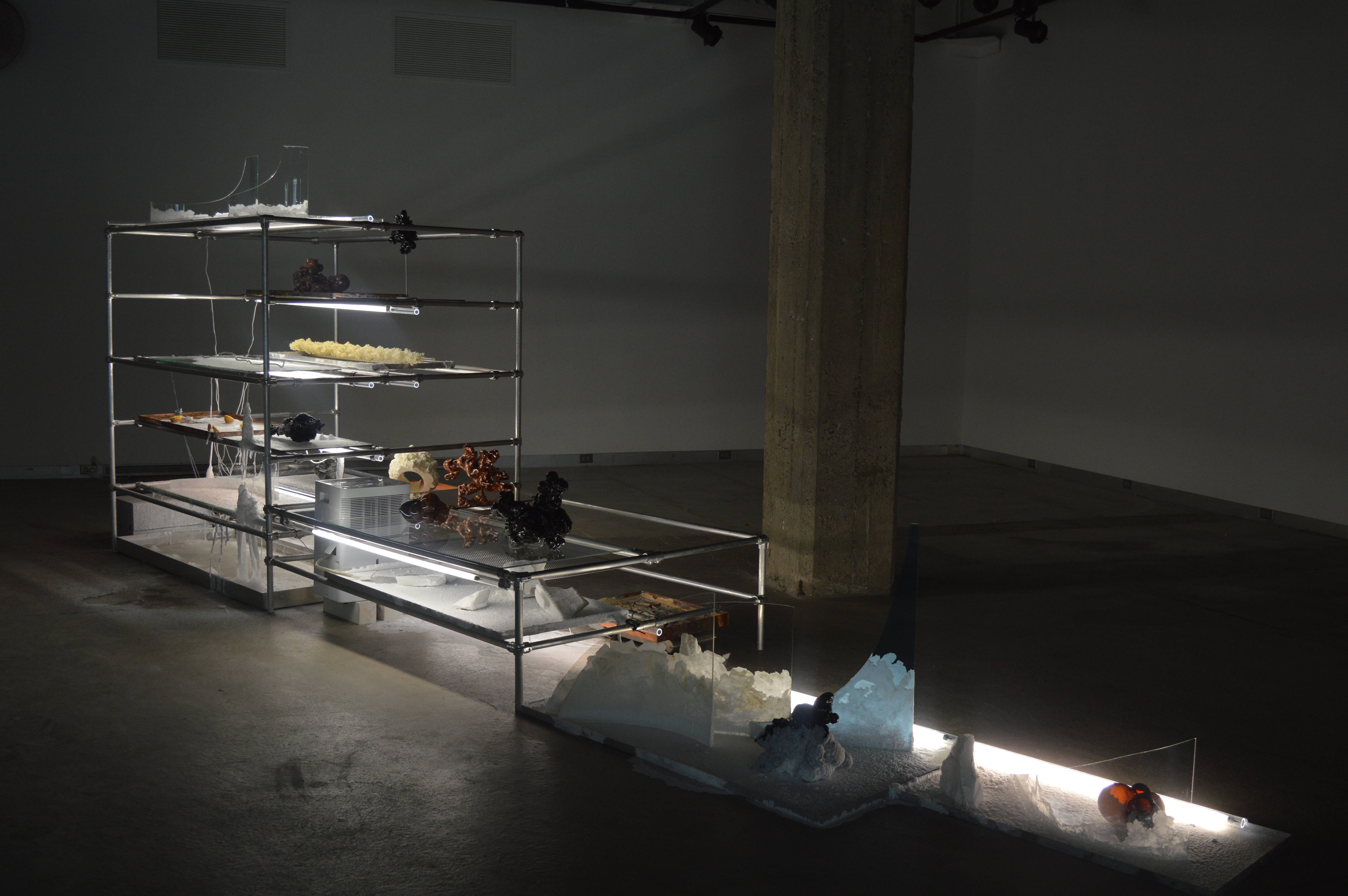 The ‘Badwater’ exhibition was built to undermine itself with highly salinated water in an effort to stimulate real environmental problems. (Photo by Deniz Ozbay ’22)

While artist William Lamson’s exhibition “Badwater” catches the eye with its combination of complex geological structures, it also serves as a warning about the environmental degradation that is occurring in dry areas of the world.

The exhibition, located in the Grossman Art Gallery, consists of a series of objects and materials that create an abiotic system, allowing the geologic forces to “develop over the duration of the exhibition,” according to its website.

Art Professor Jim Toia, who was instrumental in the installation of the exhibition explained that the piece speaks to the lasting effects of human removal of groundwater out of the earth, which causes the ground to become increasingly salty.

The piece is meant to demonstrate this problem in an emblematic fashion. It specifically touches upon the relevance of the issue in central California.

“Central California is a bread basket of countries where we grow 90% of our crops. And we are slowly depleting all the water resources that are there,” Toia said. “The piece creates an installation about growth, natural processes and growth processes that take over an environment.”

In order to simulate the problem in a way people could see for themselves, Toia explained that Lamson “built an environment that is undermining itself with this highly salinated water that is constantly pumped into the installation and overtaking the installation.”

This allows people to visually see and understand the geological problem on a small scale.

Besides its bold environmental message, the exhibition is also meant to show students the many ways they can approach and think about artwork, according to Toia.

“Art is a common language that we all can come to some type of agreement on, many different considerations and disciplines coming together,” Toia said.

In his continuing support of environmental causes, Lamson has done a wide variety of projects over his 20 year career, including another work concerning Death Valley called the “A Line Describing the Sun.”

An interdisciplinary artist who often works with elemental forces in his exhibitions, Lamson has also based work on places such as the East River in New York and the Atacama Desert in Chile, revealing environmental forces affecting them. All of his work contains some sort of performative action that acknowledges the forces at play.

Lamson’s work has been exhibited throughout the United States and Europe in museums such as the Brooklyn Museum, the Moscow Biennial, and the Honor Fraser Gallery in Los Angeles.

William Lamsom will be speaking at the college next Monday, February 24 at 4:15 in the Landis Cinema of Buck Hall. He will focus on recent video and installation projects as well as the varied nature of his practice and the challenges he faces as an artist.