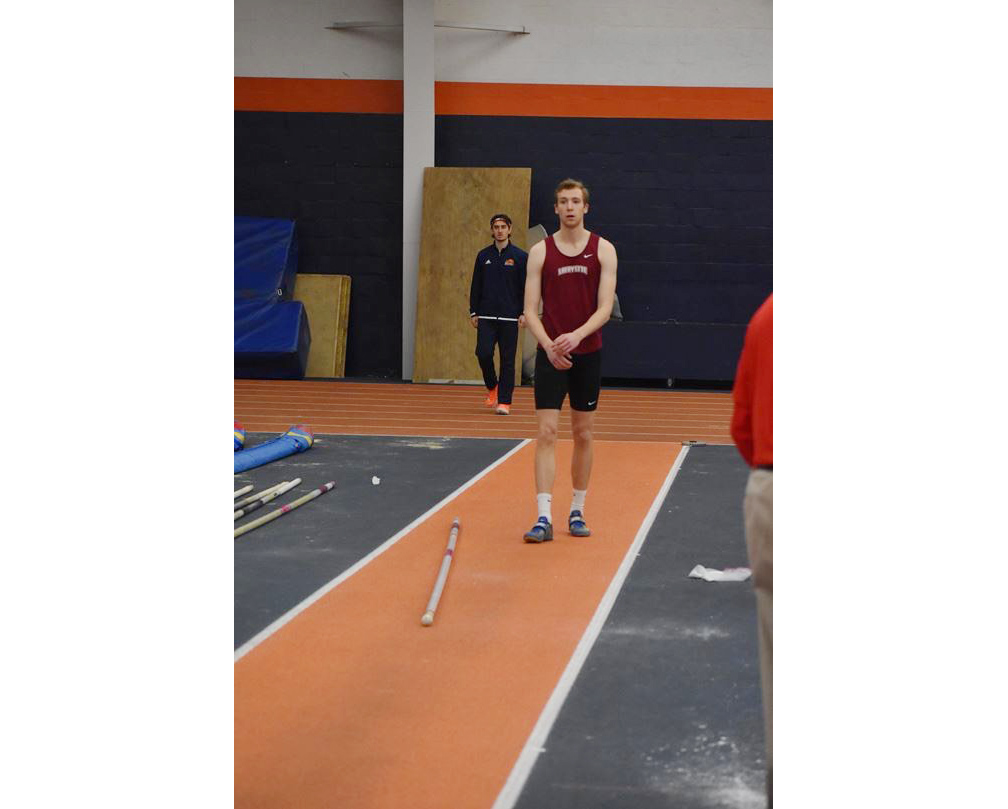 Hubeny is also currently third in Lafayette history in the decathlon. (Photo courtesy of Athletic Communications)

The finish line in sight, he dashed full speed ahead. He could see the clock. He knew what this could mean.

Crossing the finish line, he collapsed to the ground from exhaustion. Looking up, he saw all his teammates cheering for Lafayette’s new heptathlon record-holder.

In 2019, then-junior Tyler Hubeny’s 4,784 points broke the school record 4,769 points held by Kyle Clayton ‘10. Now a senior, Hubeny doubled down by blowing his own score away the very next season with a 4,972-point performance at the Bison Open & Multi. He won the event by almost 700 points.

“It was really exciting because the whole team was there and knew I was close to the record,” Hubeny said of his junior year performance. “Everyone knew what time I needed to run [and] everyone was there cheering and screaming. It was very exciting and something I was very proud of getting.”

Coming into Lafayette, Hubeny said he hadn’t lifted in high school and had a learning curve to adjust to. He fell over in his first attempt at the higher college hurdles. It was his best event in high school.

“I was good for my high school, but I didn’t think I’d ever be very competitive at the college level,” Hubeny said. “I was certainly competitive [in high school]. I went to my state meet my junior and senior years in the pentathlon and broke my high school record.”

Hubeny said he thinks there were some who thought he wouldn’t be good enough to stay on the team when he started his freshman fall. It took some time, but he proved them wrong.

“Once I started competing, I think people started to notice that once it came to competitions I was good,” he said. “I did well at the league meets my freshman and sophomore years, I took second in the decathlon my sophomore year. After that, people knew. It was just coming in, I think people were a bit skeptical of the skinny awkward kid.”

Hubeny started on hurdles in the seventh grade, and he’s been improving and picking up more events since then.

“My high school track coaches were very influential for me because I spent a lot of time with them developing as an athlete and as a person,” Hubeny said. “I feel like they taught me not only how to be an athlete but also what it means to do what you love to the best of your ability.”

“Enjoying the sport as much as I have makes going to practice fun,” he added. “It makes me want to do better. There’s always stuff to work on.”

Hubeny contacted head coach Michele Curcio heading into college, and she told him that he could be a multi, which is someone who competes in multiple events, like the heptathlon. The adjustment to being a multi in college was more than just higher hurdles, which the 6’4” tall Hubeny said his size helped him conquer. Hubeny had also never done the pole vault, nor had he thrown a disc or javelin before.

Other multis, past and present, have helped Hubeny improve his game. Sam Cutrone ‘18 finished his college career just four points off Clayton’s heptathlon record, and used to train with Hubeny. Junior Katie Ullmann, who recently recorded a personal best in the pentathlon, trains with Hubeny every day at school.

“You can definitely see his dedication to the sport,” Ullmann said. “He wants to be good. When we train together, we both have our strong events, where we push the other to get better.”

“It’s super cool to see how far he’s come to finally achieve the goal he was after,” she added. “You can tell he loves it.”

Hubeny is currently third in Lafayette history in the decathlon, and hopes to sit atop that leaderboard before he graduates. In order to do that, he’ll need to break a 21-year-old record which is held by Bill Yinger ’99.

First, though, Hubeny has his sights on yet another improvement in his last heptathlon at the Patriot League Championships in Bethlehem on February 29 and March 1. Hubeny said he feels he can improve in the pole vault, long jump, and shotput.

“I hope my best is still ahead of me,” he added.