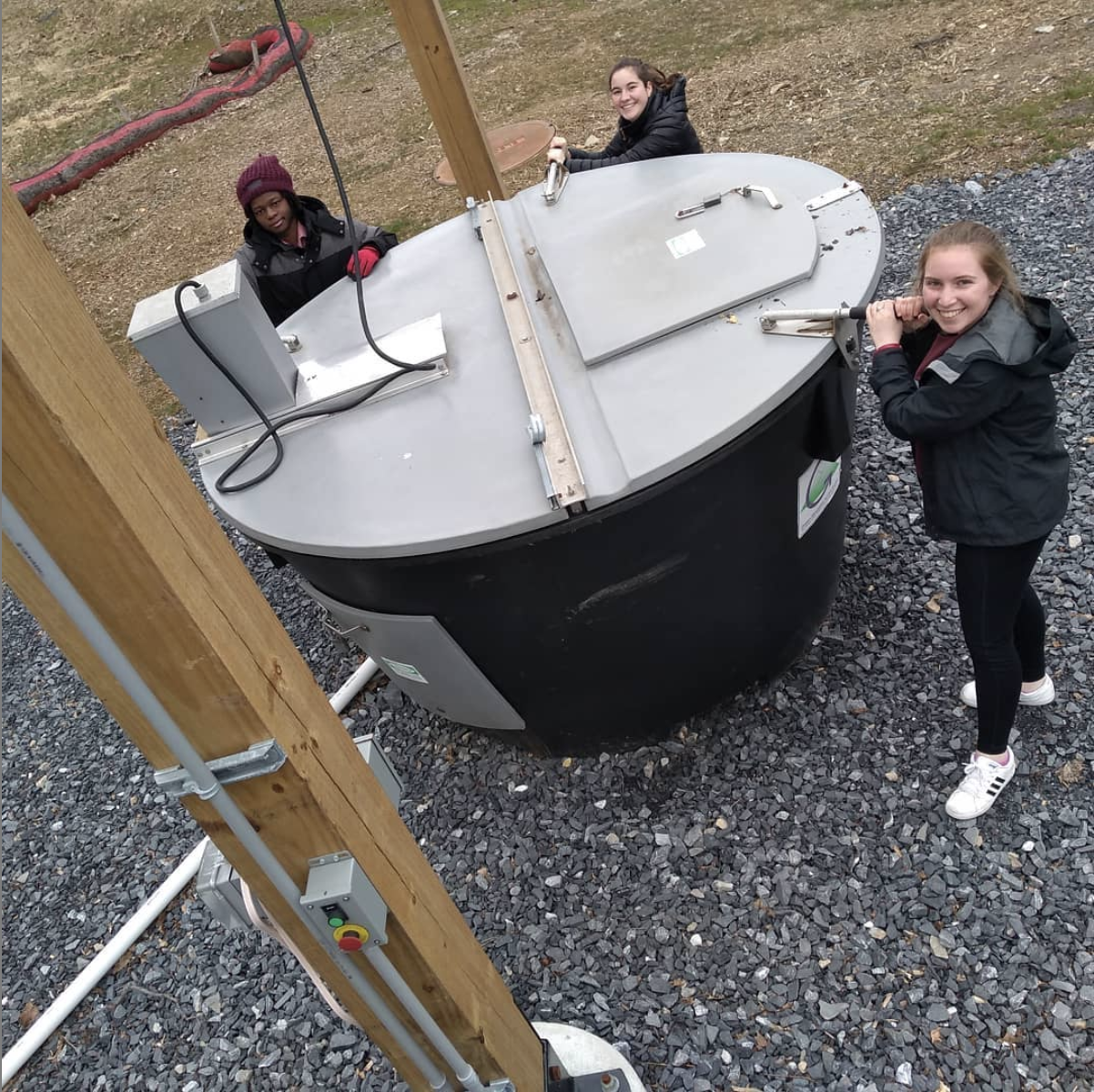 Students use one of the two Earth Tubs at Bushkill for composting plate waste from Upper Farinon. (Photo courtesy of LaFarm Instagram)

Easton’s Farmers Market began a food composting program for Easton residents in the summer of 2018, the same time Lafayette brought back composting on campus after a two-year lapse in the program.

A new full-time position and more funding is needed to successfully compost all food waste on campus, Lisa Miskelly, the Assistant Director of Food & Farm explained. She said, however, she is hopeful about a future campus-wide composting program coming soon.

“When we do have a program that exists that’s campus-wide, it’s going to take a lot of effort on the part of students to actually educate themselves, break down the trash into the various components of where it belongs,” Miskelly said.

There currently is no upcoming composting program for academic buildings, Kendall Roberson, the Sustainability Fellow explained. A front of house composting at Eco Café was piloted, but due to contamination, a more thorough sorting system is required to expand.

Composting originally began at Lafayette in the spring of 2010. The Lafayette College Society of Engineers & Scientists (SEES) received a grant from the PA Department of Environmental Protection and the Ludwick Family Foundation, funding the installment of two Earth Tubs to handle organic waste pulped in dining halls, according to the SEES website.

The Earth Tubs are large plastic tubs that use both manual labor and electricity to rotate an inner auger and support the breakdown of the food waste added to the tubs, Miskelly said.

“Our whole process takes two weeks, which isn’t a finished compost product, but it’s at a point close enough that we take it out and let it continue its digestion process just sitting stationary, at that point it can be a static pile,” Miskelly said.

However, due to the large quantity of food waste at Lafayette, only plate food waste from the Upper Farinon Dining Hall is composted, and only a limited amount due to the labor-intensive nature of collecting buckets given to Upper Farinon by Miskelly and the three student compost managers. These managers work about two hours a week and take the buckets of food pulp down to the Earth Tubs located at the Bushkill parking lot, according to Miskelly.

Miskelly explained that they bring food buckets to Upper Farinon Monday through Friday.

“My guess would be by lunch, maybe dinner on Saturday, those buckets are full. I don’t think we ever collect the food waste that comes in on Sundays and the early part of Monday until they have new buckets from us on Monday. So, we’re getting like five and a half days a week.”

Miskelly explained that one of the number one thing that students ask her about is the composting program at Lafayette.

“I do think that [a campus-wide program is] going to take a fair amount of effort, and I also think that the most important thing when we have a compost program in place, is going to be that it’s not going to work unless people care and are willing to take the time to sort their trash,” Miskelly said.

“We all have a mentality that we can just throw stuff away. But I think we don’t ask where away is and what that means,” she added.