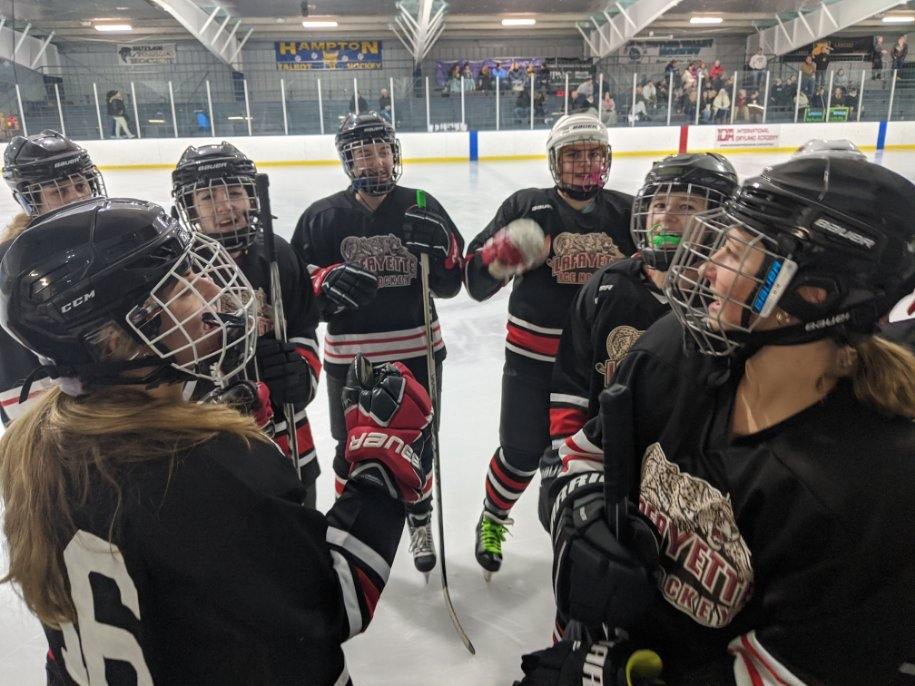 The team enters the postseason as the second seed. (Photo courtesy of Liam Lansang)

Next week, the Lafayette women’s club ice hockey team will travel to Delaware to begin their postseason, following their best season yet.

The team is now in second place in their division after their back-to-back wins at Slippery Rock University last weekend. The Leopards won 7-2 on Saturday, followed by a closer 2-0 margin of victory on Sunday.

“The team is still fairly new,” freshman defender Layla Ennis said. “It’s a big change from last season, we were last in the league and this year we’re second, so it’s really exciting for members who have been a part of the team the last three years. It’s gone really well, definitely our best season so far.”

On Saturday, freshman forward Leslie Phillips came out and scored the first goal of the game in the first period, off an assist from senior defender Elise Bossert. Lafayette carried a 1-0 advantage into the second period.

Just over two minutes into the second period, senior forward Mackenzie Sangster found the back of the net to extend the lead to 2-0.

“[Sangster] had her second goal ever which was really fun to watch,” freshman forward Genevieve McClean said.

Slippery Rock answered later on in the period with a goal to trim the deficit, and the game went into the third period with a 2-1 Lafayette lead.

Just as the third period began, Phillips was injured from a major hit and had to come off the ice, giving Lafayette an extended five-minute power play.

The Leopards took full advantage, scoring three times during the power play to open up a 4-1 lead.

At 3:30 into the third period, Ennis scored her first goal, followed by McClean’s goal just fifteen seconds later, and another goal by Ennis at 4:15.

“We were already up 2 to 1, but having the power play for five minutes, we were able to score 3 goals within a minute, which was just our team rallying around our player,” explained Ennis. “It kind of lit the fire under us to go win.”

McClean added another goal at 9:45 when the game was back to even strength, but Slippery Rock answered that goal just a minute later, bringing the score at 6-2.

Lafayette had the final tally when Ennis completed her hat trick with a goal at 13:30, as the game went on to a 7-2 final.

“I joined the team late, so coming on I didn’t really know what the skill level was,” Ennis said. “I’m really happy finding a place on the team, and on defense being able to help obviously defending but also contributing to the offense.”

Lafayette’s second game against Slippery Rock got off to a slower start. The score remained at 0-0 until four minutes into the third period, when McClean scored her third goal of the weekend with the assist credited to Sangster.

“We have all different skill levels, but we work well together, which is a cool element of the team and makes it more fun,” McClean said. “We’re in second place right now, and I’m really proud of that, because we’ve worked super hard to get there, especially this weekend.”

“I think it was one of toughest teams we faced, not necessarily skill wise but mentally, because they were more aggressive than everyone we played,” she added. “It was a big moment that we were able to pull it together.”

With just under five minutes remaining, Ennis clinched the win with a late goal and the Leopards finished off the weekend sweep.

“The second day was our first shutout of the season,” Ennis said. “It was our first road trip of the season, so it was different coming and playing the same team back to back. We were all a little tired but we didn’t let any goals in, even though we had three penalties.”

Junior goalie Maria Giambruno-Fuge earned her first shutout of the season in the second win over Slippery Rock.

“Maria doesn’t get enough recognition from the outside, but this weekend she had her first shutout of the season, and she made a lot of saves that could have led them to beating us,” Ennis said.

Ennis also credited Phillips for returning quickly from her injury during Saturday’s game to help the team win again on Sunday.

“[Phillips] got injured the first game, and came out and played the second game,” Ennis said. “Without her, we wouldn’t have been able to win.”

“It’s always tough to watch when someone gets hurt, but she pulled through,” McClean added.

The team finishes the regular season 7-2-1, and will enter the postseason winners of their last six games dating back to November.

“Next weekend we have playoffs, and I think we have a really good chance of going far,” McClean said. “I expect really good things from us [that] weekend.”

Lafayette holds the second seed in the four-team playoff bracket, and will face the third seed Indiana University of Pennsylvania, who the Leopards beat twice during the regular season, tomorrow at 9:45 p.m.

“We’re going in on a winning streak, in the best position the team’s ever been in,” Ennis added. “We’re confident that we have a shot at making finals on Sunday, which would be a first for the team, and a major step in growing the program.”