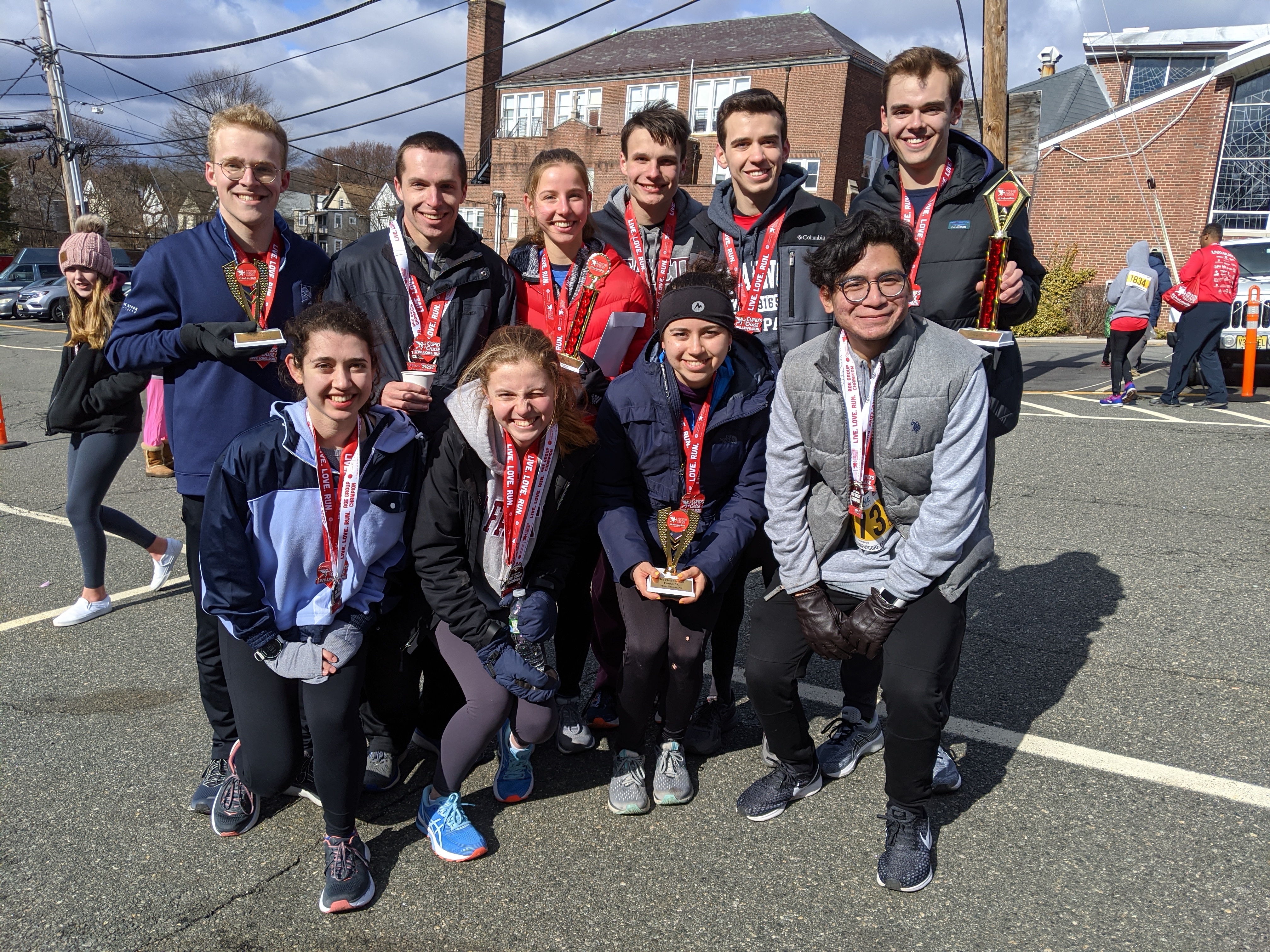 The running club will compete in a half marathon in April. (Photo courtesy of running club)

The Lafayette co-ed running club kicked off their season in stride last weekend, with five runners placing in the top 10 overall of the Cupid’s Chase 5K in Morristown, N.J.

In two different categories, 20 and under male/female and 21-25 male/female, Lafayette came out on top overall. Senior president of the club Andrew Schmid came in first place overall with a time of 18:03.28.

“We don’t race to win necessarily like a [Division I] sport would,” Schmid said. “We love running, so we run together. With that said, I often place well in the races, but I don’t ever expect to win going into one. But it was fun definitely being able to.”

When it comes to preparing for a race like this, Schmid credited his high school training and coming in with a plan.

“My school was big on running even splits or even getting faster as the race goes on,” Schmid said. “Knowing what your potential is and holding yourself accountable for that goes a long way.”

From a total of eight participants to now having close to 30 members and 20 who actively race in competitions, Lafayette’s running club has grown since its start four years ago. For Schmid, the club began just at the right time during his freshman year at Lafayette. After running cross country and track and field in high school, Schmid utilized the running club as a way to get away from schoolwork to socialize with people who have a similar passion for running as well as for maintaining a healthy lifestyle.

“We don’t have any talent cutoffs,” Schmid said. “So we have people of all abilities, some who ran in high school, some who ran varsity here at Lafayette but no longer wanted that time commitment, so they came to us. The club is for people who love running and want to run together.”

On the women’s side, sophomore Kristen Steudel finished second among women and eighth overall with a time of 20:37.99.

Steudel has adopted a more relaxed approach to running during her time in the club.

“I don’t wear a watch or anything when I run anymore, and I have started to run more just by feel now,” Steudel said. “I used to pay more attention to what time I was running, but now I just go by feel. I’ve found that actually staying relaxed helps me to run faster.”

After running for varsity track and field at Lafayette, Steudel was happy that a club such as this existed, allowing her to run simply for the enjoyment of it.

“It’s about enjoying the process, and sharing that with other people,” Steudel said.

Coming in ninth overall right behind Steudel was senior Talia Baddour, finishing in a time of 21:08.00. Freshman Emma Hamilton finished 14th overall with a time of 23:03.97 while junior captain Cynthia Mikula placed 22nd in a time of 23:52.78.

“Despite it being really cold, our performance was really impressive,” Steudel said. “Eight out of 10 of our runners placed and got awards, so that was exciting to see. It was memorable that when we finished, we saw eight of our runners. We have people on the team who didn’t start running until they got here and others who have been running for years. To be able to raise everyone together was really special.”

The club takes part in low pressure, community runs that are not affiliated with national club sports, allowing members to race for their own enjoyment or personal goals. A typical semester includes three 5Ks, one half marathon, and one flex race. Members have emphasized that the club is open to anyone with practices being completely optional.

Up next for the Lafayette running club is the Ice Scraper 5K in Allentown on March 1st. This will be followed by the St. Luke’s half marathon on April 26th.