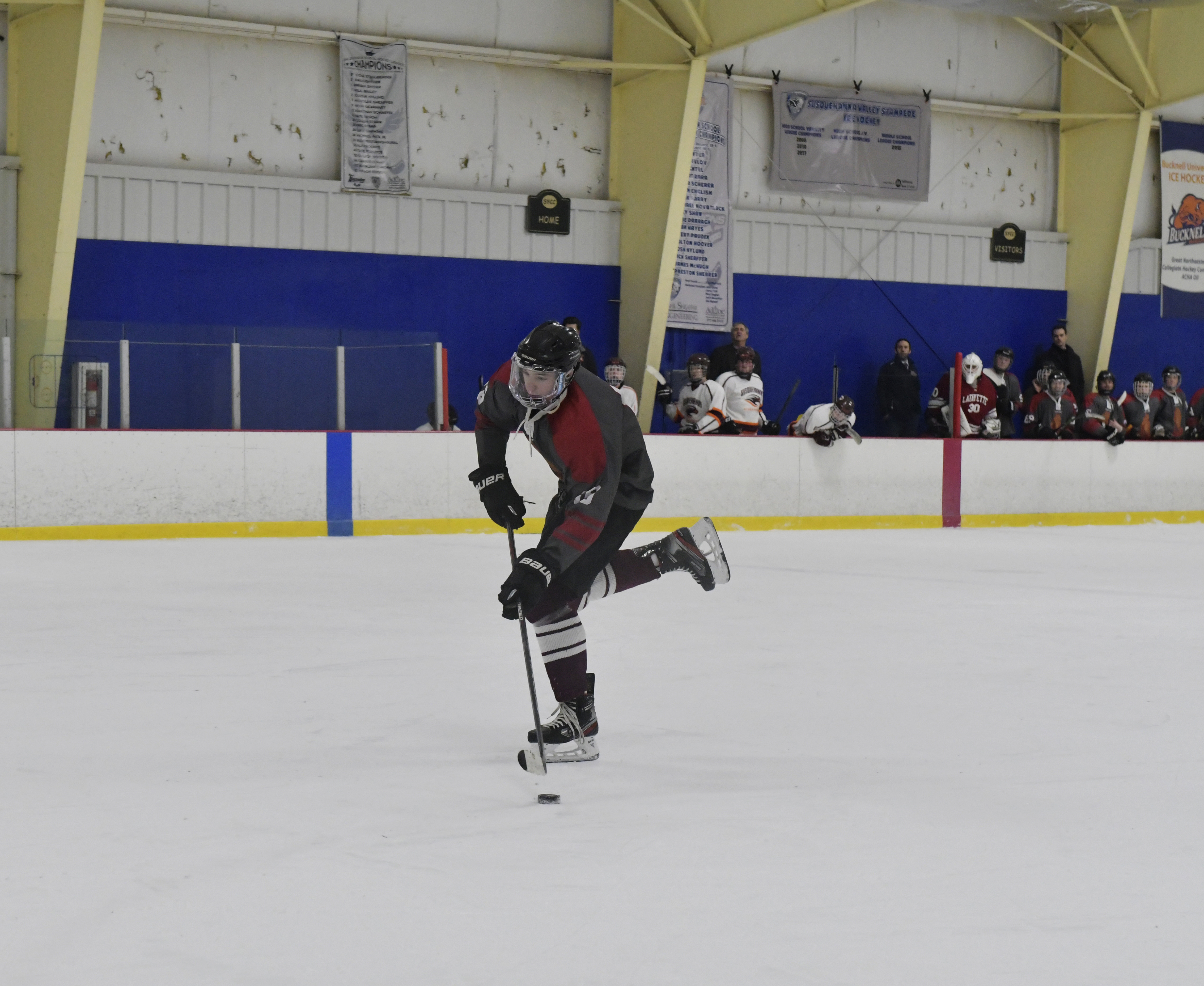 The Lafayette men’s club ice hockey team recorded a 3-1 loss against top-ranked Kutztown last Friday, before bouncing back for a convincing 10-2 win over Susquehanna on Sunday. The team has won six of their past seven games, dating back to November, and currently holds a 9-6 record.

Lafayette plays in the Delaware Valley Collegiate Hockey Conference (DVCHC) division II, which consists of eight teams. Although they came up short against Kutztown, the Leopards put up a fight against the best team in the division.

“Kutztown was a great game for the team, despite losing 3-1,” freshman forward Nick Tufano said. “It showed that we have the grit to play three full periods [and] that we can compete with the top teams in the league.”

It was a slow start for both teams as the first period ended with a scoreless tie. Kutztown ended the scoring drought early in the second period, notching two power play goals at 17:27 and 10:20 to go up 2-0.

Taking penalties seemed to be the downfall for the Leopards all night, as they recorded 10 penalty minutes on infractions from five different players. Lafayette played a man down for 10 out of the game’s 60 minutes.

Later in the second period, the Leopards capitalized on their own power play as senior forward and alternate captain Jack Alden found the back of the net off an assist from senior captain Harrison Lapides. Alden’s goal was his sixth of the year and narrowed the deficit to 2-1. He currently ranks fourth in scoring and third in assists on the team.

Kutztown quickly answered with an even strength goal with just 35 seconds left in the second period, extending their advantage to 3-1 heading into the third.

A back and forth third period didn’t produce a goal for either team, despite a number of scoring chances for Lafayette.

“I think we lost focus in the second period and weren’t as aggressive as we should have been,” sophomore defender Luke Woodward said. “The third period where we dominated the play was much more representative of how we can play as a team.”

The Leopards were competitive all game, recording 35 shots on goal to Kutztown’s 40. Sophomore goalie Jack Eselius made 37 stops to improve his save percentage to .888, fourth best in the division.

“I think we may not have come out as strong as we liked, which led us to [go] down early, but we continued to play a strong game,” Tufano said.

Lafayette responded with a lopsided 10-2 win over Susquehanna on Sunday, with seven different Leopards scoring goals in a balanced offensive effort. The Leopards put a whopping 68 shots on goal in the contest and scored three or more times in every period.

“We dropped a tough one on Friday and the team wanted to come out hard and play together and get pucks deep,” Lapides said. “We’re geared up for hopefully a deep playoff run, we’ve got a big two games this weekend and we’re looking forward to it.”

Freshman goalie Ted Fisher stopped 35 of 37 shots to improve his division-leading save percentage to .936.

Alternate captain and senior forward PJ Webb, sophomore forward James Kiley and freshman forward Dylan Maloy each scored a pair of goals, while Woodward racked up four assists and Lapides added three. Woodward and Lapides lead the team in assists with 10 and nine, respectively, on the season.

Sophomore forward Colin McKinnon and freshman defender Ryan Jochims both tallied their first goals of the season, and each added an assist in the game. Sophomore forward Ty Sharinn and Lapides each chipped in a goal as well.

Junior defender John Schroeder sprained his ankle during the Susquehanna game and his return date is unknown. Schroeder’s presence will be missed on the defensive end, and he has also managed four goals and four assists in his 11 games played. Lapides said that Schroeder “should be back soon.”

The Leopards have two crucial games remaining in the regular season, as they currently sit fourth place in the division as the playoffs near. The top six teams earn spots in the postseason, and Lafayette needs just a win or a tie in one of the two games to clinch a spot.

“To stay focused I think we just need to come together as a team and make these last workouts and practices count in order to better prepare ourselves for the two big games coming up,” Woodward said.

Lafayette concludes the regular season with two away games this weekend at Bloomsburg and Alvernia on Saturday and Sunday, respectively.