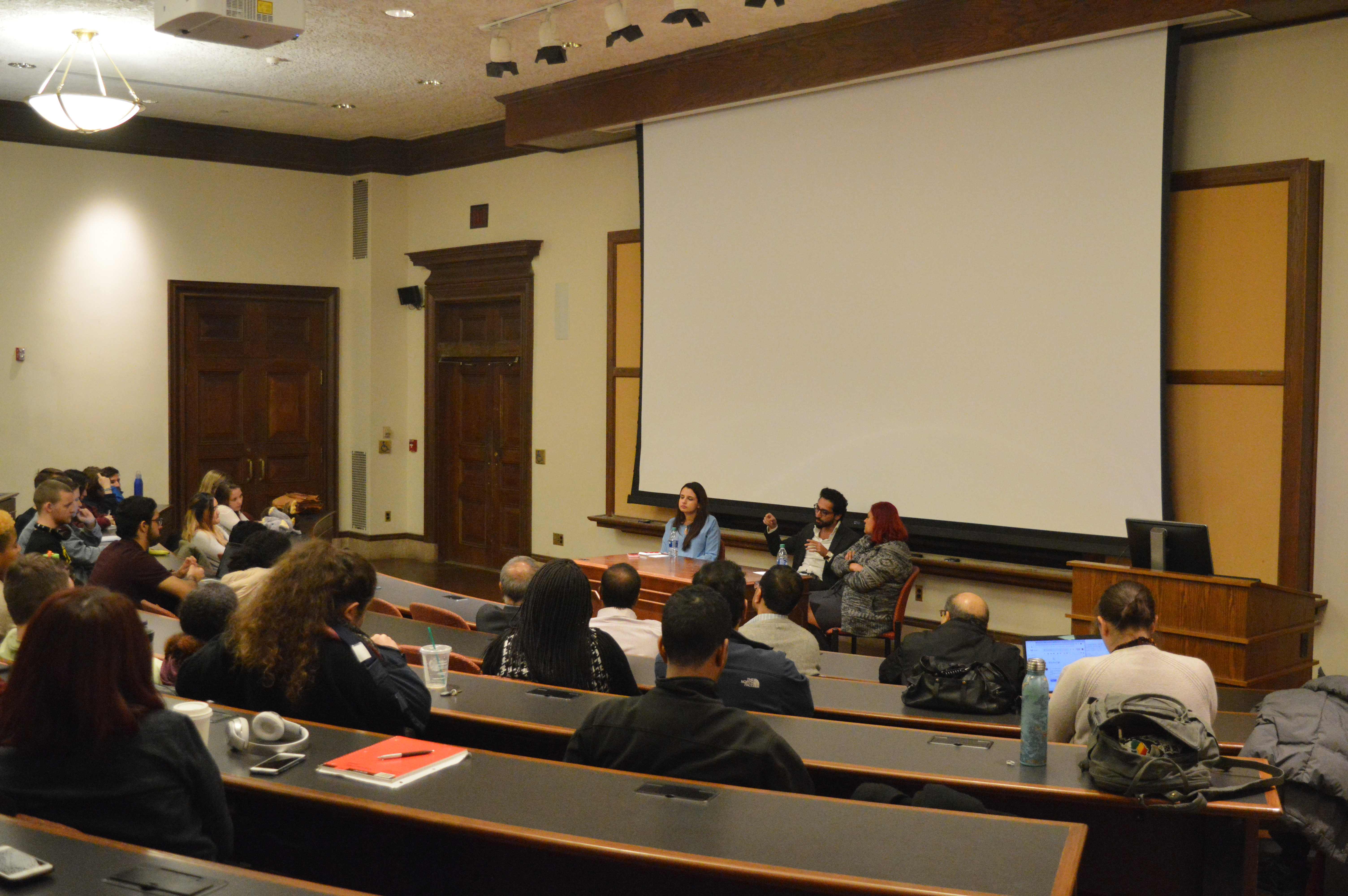 The talk on Kashmir was the first in the new student-led lecture series Xposed. (Photo by Deniz Ozbay ’22)

For years, the Indian government has been “suppressing the political rights of the [Kashmiri] people,” according to history professor Hafsa Kanjwal.

This Tuesday, students and faculty gathered in Kirby 104 for a panel discussion centered around Kashmir and the conflict underway within the region. The panel included Kanjwal and Abdul Bhat ‘18, both of whom grew up in Kashmir, and was moderated by anthropology and sociology professor Neha Vora.

The discussion began with a video that gave background information on the history of Kashmir and the current issues facing the region. Kanjwal elaborated on the ideas put forth in the video, explaining that in August of 2019, Kashmir was placed under a lockdown. She went on to say that “the…government under Prime Minister Narenda Modi, who leads, essentially, the Hindu Nationalist Party, revoked Kashmir’s special status under the Indian constitution.”

Kanjwal explained that this “special status” is enshrined in what is known as Article 370, which includes the statement that Kashmir has autonomy on issues relating to everything but foreign affairs, defense, and communications.

“[The Modi government] revoked this article in a completely…authoritarian manner,” Kanjwal said, “where all forms of communication were blocked, from Internet, to cell phones, to landlines. For up to two months, you could not get in touch with anyone.”

She added that the restrictions have since loosened, but for the most part, the Internet is still inaccessible. Kanjwal also noted that the Indian government has brought into Kashmir forty to fifty thousand military troops in addition to the seven thousand that were already present.

She added that the limited knowledge of what is going on in Kashmir comes from the Indian civil society groups and local Kashmiri journalists who work for the international media.

Kanjwal and Bhat are both originally from Kashmir, and spoke about their experiences during the lockdown. Bhat was in Lebanon when the lockdown occurred, and said that virtually no news reached him at that time.

“For two months, I couldn’t get in contact with my parents,” he said. He was eventually able to speak with his parents via satellite phone, but has not been able to contact his extended family at all.

Kanjwal and Bhat also discussed the framing of the conflict as an “occupation,” specifically in referring to India as a colonizing power. Kanjwal explained that “most often the issue is just called a conflict; the India-Pakistan Conflict, or the Kashmir Conflict, and what is usually assumed is that there are two equal sides…and there is a…territorial dispute between them. What that glosses over is that there is a seven hundred thousand strong military occupying power that is in a place it is not supposed to be, and is suppressing the political rights of the people.”

Kanjwal said that as a result of this, she believes that “occupation” is the only correct way to frame the situation. Referring to it as a bilateral dispute “erases what actual people in Kashmir are going through and what they are living under,” she said.

The panelists also spoke about the framing of Kashmiri resistance to the occupation as terrorism. Bhat began his response to this idea by claiming that “a hierarchy of resistance [has been constructed]…” in which there are “…proper and improper forms of resistance.”

Bhat argued against this proposed hierarchy.

“It is crucial that we do not submit to the hierarchy of the resistance that has been constructed…because it calls armed resistance terrorism, and I think that there are undertones of Islamophobia in that,” he said.

“Historically, Kasmiris were always looking to more peaceful means of fighting for their right to self determination…At every point in time that they tried [peaceful] means…they were attacked,” Kanjwal added. “When you don’t give people any viable means of peaceful protest…armed resistance is a reaction to that.”

The discussion was put on by the International Students Association (ISA), and was the first in an ongoing discussion series that the organization created, entitled “Xposed.” According to Saeed Malami ‘20, president of ISA, the goal of the series is to “expose different [ideas] that are not often dealt with…and expose the campus to a wider set of ideas about different international issues…in an in-depth manner that allows for a thorough investigation into what is happening in [other] places.”

Betsenat Gebrewold ‘20, who led ISA in putting together the discussion, echoed Malami’s sentiment.

“ISA does a lot of cultural events,” she said. “But the Xposed series [suits] the intellectual sphere, and is dedicated to discussing different international issues.”

Malami said that the choice to begin the Xposed series with the discussion of Kashmir was an intentional one.

“Lafayette is really well positioned…to have this conversation,” he said, “because Professor Kanjwal is probably one of the most prominent scholars on Kashmir today in America, and Abdul…is from Kashmir. Lafayette is lucky to have two people from Kashmir who have this experience and resonate very deeply with these issues.”

“[I hope students] become more reflective on what is happening in Kashmir, but also on larger questions that are happening in international politics,” he added.

Bhat shared a similar sentiment. He hoped that “on the surface level, [attendees would] learn about the situation in Kashmir, but on a deeper level…understand how processes of settler colonialism are not a thing of the past.”

Gebrewold said she hopes the discussion, and the Xposed series as a whole, allowed attendees to be “more aware of what is happening around the world, and what we can do about it here on campus.”

“What we hope that people take from our events is having a better understanding [of international issues],  but also connecting [that understanding] back to [Lafayette],” she said.