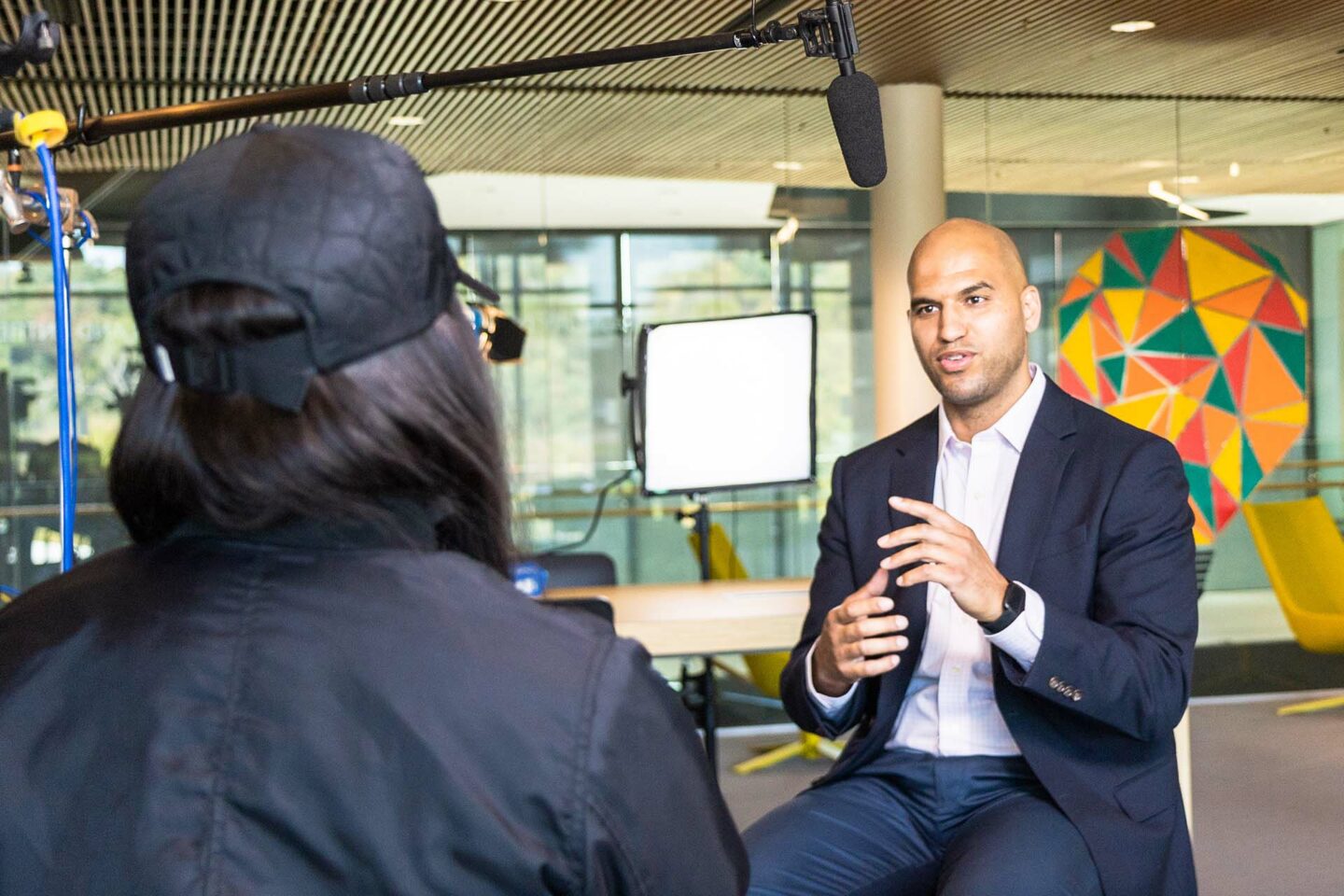 Dahl said he wants to make the Dyer center into the ‘best undergraduate entrepreneurship program in the country.’ (Photo courtesy of Lafayette College Communications)

In a nook of the Dyer Center for Innovation and Entrepreneurship, Yusuf Dahl, the center’s director, sits before a small sign. On it are two words: the first, struck through, reads “mistake.” Below sits an alternative: “lesson.” It is a fitting backdrop for a man who has managed to see all his major setbacks with silver linings.

Dahl was raised in a single-parent household on the North Side of Milwaukee in “an environment of scarcity.”

“My mother had some chemical dependency and alcohol issues,” Dahl said. “At 14 years old I was sentenced to the boys school which is basically a juvenile prison…it was for some type of petty larceny. And it was when I was behind bars that I first understood the power of drug dealing, as a business model… I’m listening to these tales of wealth and extravagance, and I’m like wait a minute, this guy is actually providing a service people want to pay for.”

Though they were illegal, Dahl differentiated himself in a competitive market with expedient services and reinvestment of the capital he earned, allowing him to grow a network of drug houses.

“I would say the reason I was successful, is the same thing that’s made me successful my entire life,” he said, “which is the ability to go above and beyond and do what others are not willing to do.”

While he was incarcerated, Dahl threw himself into a self-designed course in technology at the private prison where he served out 5 years.

Dahl went on to obtain a degree from Ottawa University, start a successful property development firm called Milwaukee Metro Management that provided affordable housing to the city’s residents, and graduate from Princeton University with a Master’s in Public Policy Analysis in 2017.

Today, he not only acts as the Dyer Center director, but also serves on the board of a not-for-profit and has recently launched a “Real Estate Lab” in nearby Allentown. The initiative seeks to empower Allentown residents looking to begin a career in real estate.

“The whole theory of change is that you have groups of folks in these communities that have the skill sets, that have the drive, that have the hustle and ambition to be successful,” Dahl says. “And if we can remove the barriers of networks knowledge and capital, real estate is a natural outlet for that entrepreneurial capacity.”

Dahl noted that other people have been one of his greatest resources in achieving his ambitions. During his incarceration, Dahl befriended a white collar criminal with a master’s degree in engineering who taught him to repair computers, enabling him to pass a Microsoft certification exam.

While looking for an apartment, Dahl met a real estate agent for whom he ended up working for on houses. The agent ultimately loaned him $5,000 to buy his first property.

In making the transition to Princeton, when Dahl struggled to pass Advanced Statistics in his first semester, he befriended an MIT graduate pursuing a doctorate in economics and eventually achieved a B+ in the class. The head of the entrepreneurship center at Princeton set him on the idea of working at Lafayette, where he gained employment fresh out of his Master’s program.

This investment in people is something Dahl said he is now nurturing in his daughter Chloe, who spends most days after school at the Dyer Center with her father, doing homework.

“What I have instilled in her is the importance of people, and connecting with people…if you can deal with and manage people you can inspire people, then you can do anything,” he said.

Despite his enormous successes, Dahl said he does not plan on slowing down anytime soon. He is looking to the Allentown Real Estate Lab to serve as a prototype for similar projects across the nation.

As for goals for Lafayette, Dahl has a clear vision.

“What my intent at Lafayette, is to build the best undergraduate entrepreneurship program in the country, bar none. That’s my intent.”