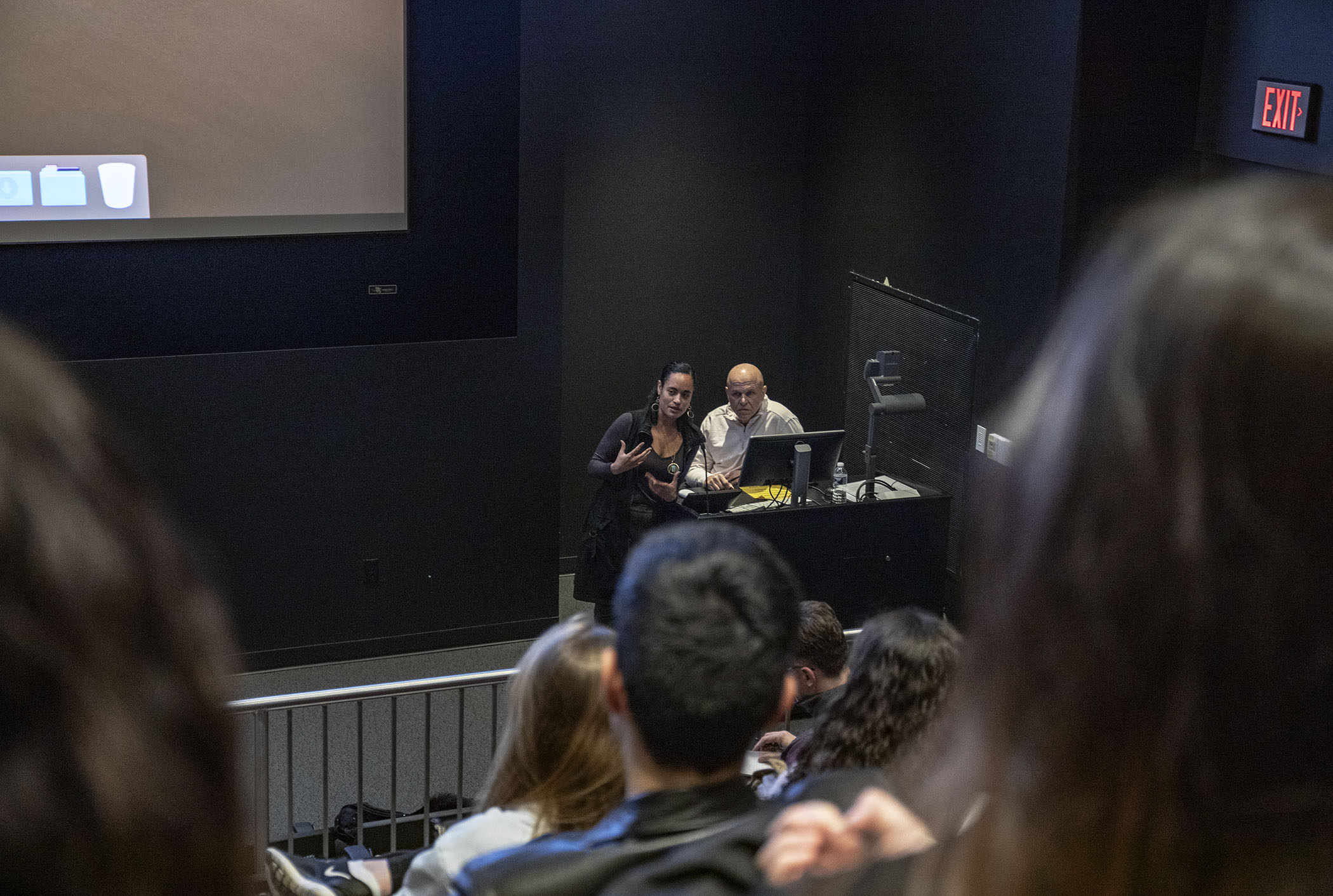 Artists Chloe Bass and Glenn Goldberg have differing artistic backgrounds, but they share a common desire for intimacy in artwork, a concept which they will explore in their time at the college.

Bass and Goldberg are the latest to visit the college for the Experimental Printmaking Institute (EPI), a professional printshop that invites artists from various fields to work on collaborative print related projects. Visiting artists can take advantage of resources that wouldn’t be available at traditional printmaking workshops, such as student assistance and a master printer.

Bass and Goldberg’s upcoming collaboration is a book project entitled “Quiet War,” which was inspired by the children’s card game “War.” In the game, two players flip a card over at the same time and whoever has the card with the highest value wins that round.

To pick the materials for Quiet War, Bass and Goldberg individually selected twenty pieces of media from their personal collections without consulting one another and showed them to each other in the style of ‘War” – that is, by revealing them at the same time.

“I wouldn’t say there could be a winner,” Bass said, clarifying a difference between Quiet War and the card game that inspired it. “But it was an interesting way to see how two unknown collections could interact.”

Before this collaboration, Bass and Goldberg knew each other as colleagues of four years at New York’s Queen’s College, where they both teach.

“Part of my excitement doing this project is that we’re very different people,” Goldberg said. “Wondering what will happen is a big part of it for me.”

Bass is a multiform conceptual artist who works in social practice, performance, situation, conversation, publication, and installation. Her work explores scales of intimacy, specifically how “patterns hold and break as group sizes expand,” according to her website.

Her ongoing project entitled “The Book of Everyday Instruction” has been exhibited at venues including the Modern Museum of Art. The project, which the New York Times describes as “elegant, unbalancing poetry,” addresses literal and figurative spaces between people during individual social interactions.

Like Bass, Goldberg is another prolific artist whose background does not include printmaking. His works have been featured in the Metropolitan Museum of Art, the National Gallery of Art, and the National Academy of Arts and Letters, among other venues. He was named the 1996 Heilman Artist and has since received grants from the National Endowment for the Arts and the Guggenheim Foundation.

In addition to their collaborative book project, Bass and Goldberg also led a lecture on Wednesday night at the Landis Cinema. Goldberg began by showing a series of videos he had chosen for the upcoming collaboration. The two-minute long videos depicted him wearing a red nose and large glasses as he told the viewer messages of affirmation.

“I like showing up every now and then and letting you know that I’m on your side,” Goldberg said in one of the videos.

When an audience member asked him whether he was using the red nose and glasses as a mask in order to get his ideas across without any inhibitions, Goldberg replied, “It did allow me to be myself and not be myself at the same time.”

Next, Bass led an activity where she responded to the audience, showing photos submitted by audience members and then letting the submitter talk about their own motivations for choosing the photo. After three photos, she invited an audience member to respond to a picture she had chosen. The activity, she explained, was a means to “enter into ways of intimacy and conversation.”

The activity parallels a previous project of hers, in which Bass hosted a talk show where she and a close guest would frankly speak about photos they chose as if they weren’t being recorded.

Finally, the lecture concluded with a brief question and answer section. When asked to name a few of the differences between them, Bass answered, “Glenn’s really into sports,” prompting laughter from the audience.

“You can’t look for differences without almost accidentally coming into what is similar,” Bass said. “Difference is a way to remind ourselves that it is important to ask questions.”