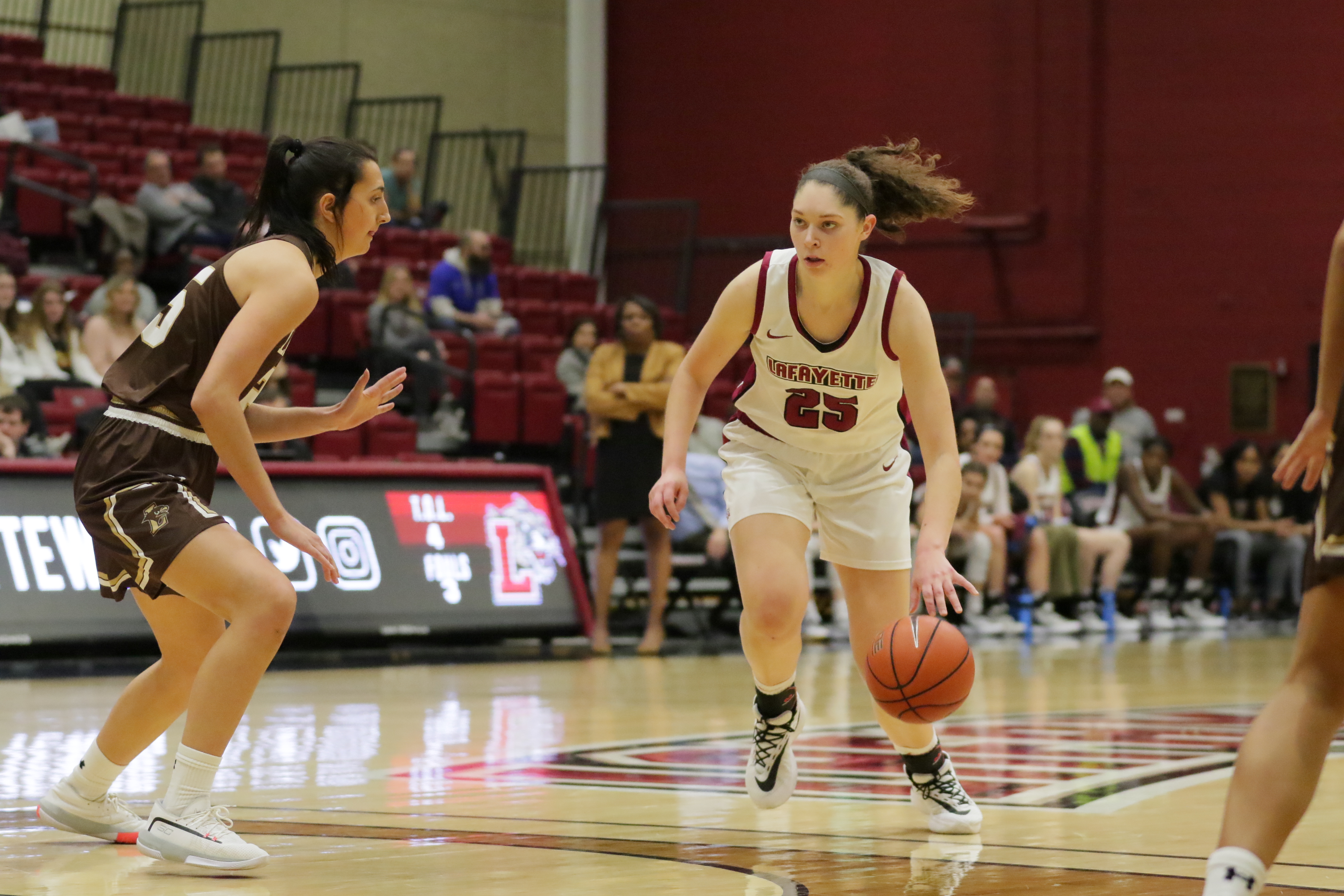 Junior forward Natalie Kucowski’s across the board contributions lifted the Leopards to their fifth straight win. (Photo courtesy of Athletic Communications)

Women’s basketball rolled into Bender Arena last Saturday on a four-game winning streak with a purpose: defeat conference rival American for the first time since 2016. The team rose to the challenge in a resounding 67-52 win.

The Leopards stormed out of the gate, nearly doubling American’s offensive output in each of the first three quarters before carrying a 52-29 lead into the final frame.

“We talked about how American is a disciplined team, well-coached, and how the past two years we’ve always been there with them but never [been] able to get over the hump,” junior forward Natalie Kucowski said. “Our main focus was to execute the game plan and play hard for 40 minutes, and because of that we got the result we wanted.”

Starting forwards Kucowski and senior Alexis Santarelli were the top two Leopards on the scoresheet in points, rebounds, and assists. Kucowski added six blocks as well.

“We’re the tallest team in the conference, and we’re working on our high-low game because we know that we can dominate the paint,” Santarelli said. “We know when teams scout us, they’ll double [Kucowski] or me in the post when we get the ball, so working the high-low puts stress [on other teams].”

There were four Leopards in double figure scoring, with junior guard Drew Freeland and sophomore guard Nicole Johnson joining Kucowski and Santarelli. The balanced Lafayette offense shot 24-50 on the day, and 9-19 from beyond the arc.

“Everyone was being aggressive and looking for their scoring opportunities in the flow of the offense,” Kucowski said. “At the same time, we had 16 assists for the game on 24 baskets, which shows how we were also passing the ball to get each other open looks at the basket, and playing as a team.”

Meanwhile the Lafayette defense held the Eagles to just 10 total baskets in the first three quarters, on 41 shots taken (3-16 on 3-point shots). They had just one player in double figure scoring with 13 points on 12 shots.

“We were active in our defense, so American was forced to take contested shots or rushed shots because we forced them to use the whole shot clock,” Kucowski said.

Foul trouble has been a recent issue, as Santarelli was held to just 15 minutes of playing time in her two games prior, fouling out against Colgate and racking up four fouls against Lehigh. She played 25 minutes in the win over American, but still committed four fouls.

“We have one of the stronger defenses in the conference statistically, so for me I know I have to stay disciplined to keep the flow of our defense consistent,” Santarelli said. “It’s been a struggle of mine because I play a physical game, but I do try to work on keeping my hands straight up every day in practice as well as games.”

Senior forward Tasha Vipond has been the usual substitution if Santarelli or Kucowski comes out of the game. She averaged 9.6 minutes per game in non-conference play, but since Patriot League play started, she’s on the court an average of 21.2 minutes per game.

“Tasha is awesome coming off the bench, and she’s now in our rotation with Natalie and me,” Santarelli said. “She’s a spark off the bench. If we need something like a spark, she’s a game-changer. She does that with grabbing offensive rebounds, defensive rebounds, she works very hard. She’s also been very consistent.”

Now with a five-game winning streak and a 7-3 conference record, the Leopards are tied for second place in the Patriot League. After having this week off from game action, the team will face Lehigh in Bethlehem tomorrow at 7 p.m.

“This week we are focusing on offensive execution and fixing the small details in our defense,” Kucowski said. “We are also making sure we get our rest and taking care of our bodies so we can have maximum energy on Saturday to play hard the entire game.”