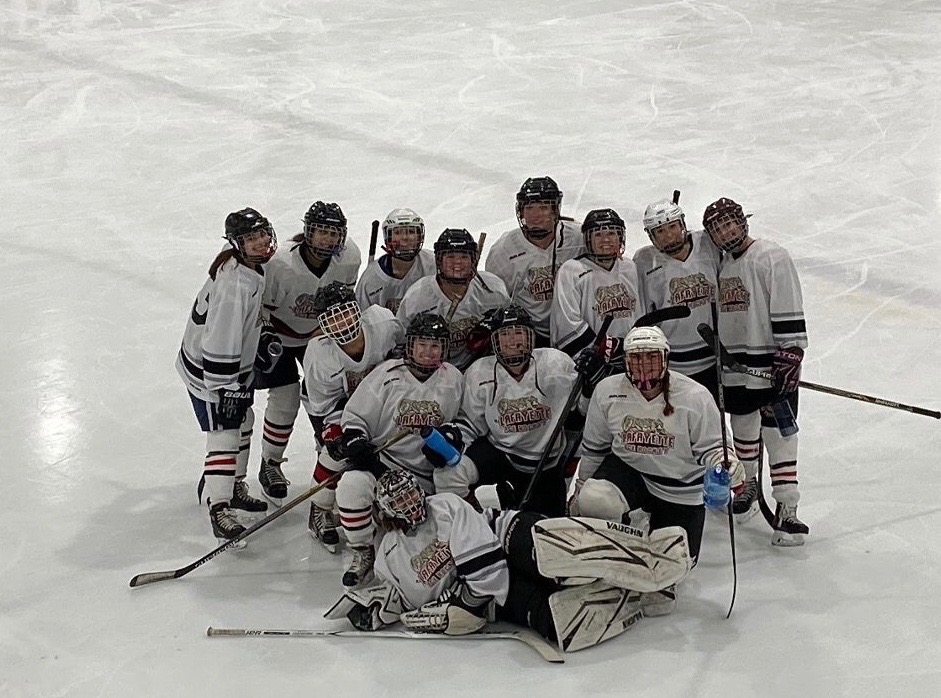 The team has two more games this weekend before the playoffs begin. (Photo courtesy of Elise Bossert ’20)

The Lafayette women’s club ice hockey team clinched a playoff berth on Saturday with a 3-2 conference win over the St. Joseph’s University Hawks.

With the victory, the Leopards improved their record to 5-2-1 and moved up a spot in the standings. They now sit in second place in the division and are just two points, one win, behind first place George Mason.

“Last game, despite being challenging, showed that our team can adapt from game to game,” said freshman defender Layla Ennis. “It was great to see our entire team be able to switch into the defensive mindset throughout the game.”

The Leopards defeated St. Joseph’s back in November with a lopsided 8-1 score, but Saturday’s game was not an easy path to victory. The Hawks got out to an early lead in this one, scoring their first goal midway through the first period.

Ennis quickly answered with a goal, her sixth of the season, less than two minutes later to tie the game at 1-1. The score remained knotted as the teams headed into the period break.

“Throughout the tight game we made sure to keep our spirit up and keep fighting,” said freshman defender Sara Graham.

Graham scored a goal of her own to put the Leopards up 2-1 just over seven minutes into the second period, but Lafayette’s first lead of the evening would not hold long.

St. Joseph’s answered with a goal to tie the game with less than five minutes left in the frame, and the score remained tied at 2-2 heading into the third period.

“[The St. Joseph’s game] was a nail-biter that kept us on our feet the entire game,” Graham said.

Midway through the final period, Graham found the back of the net for the eventual game-winning goal, giving the Leopards a 3-2 lead which would hold. With her second goal of the game, Graham moved into a tie with freshman forward Genevieve McClean for the leading goal scorer on the team, each with seven goals on the season.

But St. Joseph’s would not go down without a fight, as Lafayette junior goaltender Maria Giambruno-Fuge was forced to make several game-clinching saves late in the third period.

“Without those saves, the game would not have ended in our favor,” Ennis said.

With Giambruno-Fuge securing the win for the Leopards, the team has an opportunity to enter the postseason as the number one seed in the playoffs with two games left in the regular season. If Lafayette sweeps both games this weekend against Slippery Rock, and George Mason loses both of their games, then the Leopards will clinch the first seed.

At practice this week the team will be focusing on their breakout of the defensive zone as well as their offensive zone possession, according to Graham and Ennis, who said that these proved to be areas of weakness in the St. Joseph’s game.

“We are extremely excited to now be heading to the playoffs and will continue to keep the same positive attitude for our upcoming games,” Graham added.

Lafayette will conclude the regular season with a trip to Slippery Rock, Pa., for a weekend set against Slippery Rock University tomorrow at 8:50 p.m. and Sunday at 11:40 a.m.