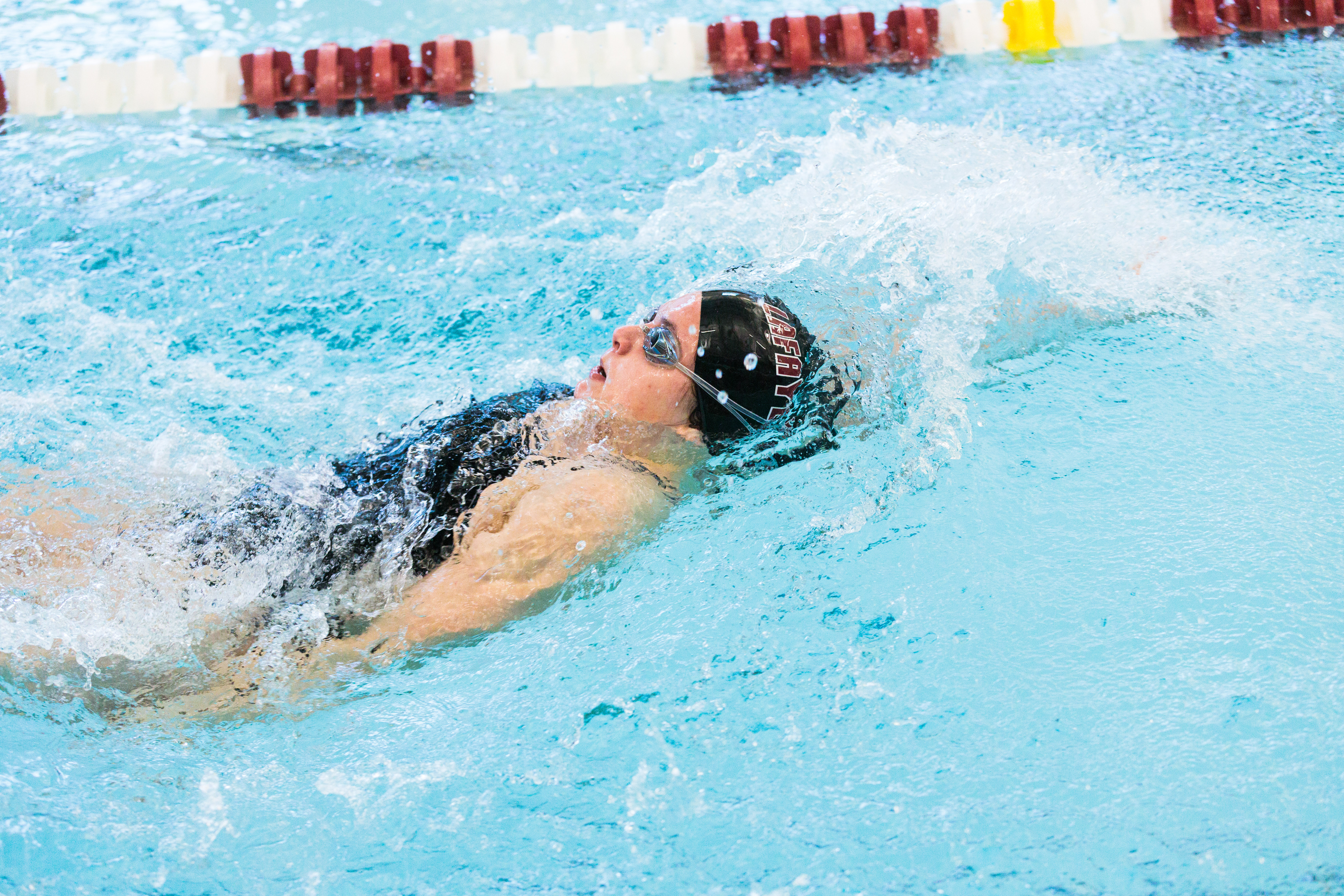 The swim and dive team will compete in the Patriot League Championship meet in two weeks at Navy. (Photo courtesy of Athletic Communications)

Most of the Lafayette swim and dive team used last Saturday’s Navy Invitational to “shave and taper” in preparation for the Patriot League championship meet in two weekends.

Sophomore Kyle Goodwill also used the invitational as an opportunity to break into the school’s all-time record books.

Goodwill now holds the seventh fastest time in Lafayette history in the 200-yard individual medley (IM) with his mark of 1:54.91.

“The team did really well,” senior captain Mitch Cairns said. “I’m excited to see what the championship [meet] looks like just based off of where we are now.”

Head coach Jim Dailey can only bring 17 swimmers from each team to the championship meet, far fewer than the 44 members of the women’s team and 24 members of the men’s. Therefore Saturday’s meet, which was not scored, gave all team members a chance to compete together one last time this season.

“The Navy Invite is a pretty unique opportunity,” Dailey said. “The Navy Invite for me is a way to get those other swimmers that don’t quite qualify for Patriot League Championships an opportunity to shave and taper and put all that work to a useful end.”

The shave and taper refers to a long-standing practice in swimming of tapering (slowing training to prepare the body to race fast) and shaving one’s body to decrease resistance in the water.

The men’s team captured a number of top-10 finishes, including Goodwill’s 200-yard IM performance which earned fourth place. Sophomore Naoki Nomura finished fourth in the 200-yard butterfly in 1:58.77, while junior David Witmer placed fifth and ninth in the 200 and 100-yard breaststroke events, respectively.

Sophomore Michael Gorgan finished in sixth in the 100-yard breaststroke, just ahead of Witmer, and also placed 10th in the 50-yard freestyle with a time of 21.93 seconds. Junior Tanner McFarland earned seventh in the 500-yard freestyle with a mark of 4:50.11, while sophomore Justin Lloyd, and freshmen Jamison Crow and Louis Franzone placed eighth, ninth and tenth, respectively, in the 100-yard backstroke.

“We had some phenomenal swims,” Dailey said. “It excites everybody else that is still training for the next two and a half weeks. They’re looking forward to their opportunity to shine, too.”

The women’s team had six top-10 finishes, led by sophomore Emily Tuchman who placed sixth in the 200-yard backstroke in 2:11.86. Junior Maya Imperial finished seventh in the 400-yard IM with a time of 4:50.63, while freshman Maggie Sigmond-Warner earned 10th place in the same event in 5:12.05.

Cairns will travel to Navy for the championship meet but will be in a coaching position instead of competing, a role he is looking forward to.

“This sport has had a lot more impact on me as a person, as a leader, as a teammate,” Cairns said. “I like coaching, I like this team, I really want to see where it ends up because we have so many fast young kids that are here.”

Dailey said that Lafayette swimmers could break “six or seven records” on the men’s side and “four or five records” on the women’s side at the championship meet, with regards to entering the top-10 all-time record books for the school. However, Dailey won’t take any of the credit for himself.

“Kudos to the kids for being the best we’ve ever had at this institution,” he said.

The team will travel to Annapolis, Md., on Wednesday, Feb. 19 for the Patriot League championship meet, which will continue through Saturday, Feb. 22.