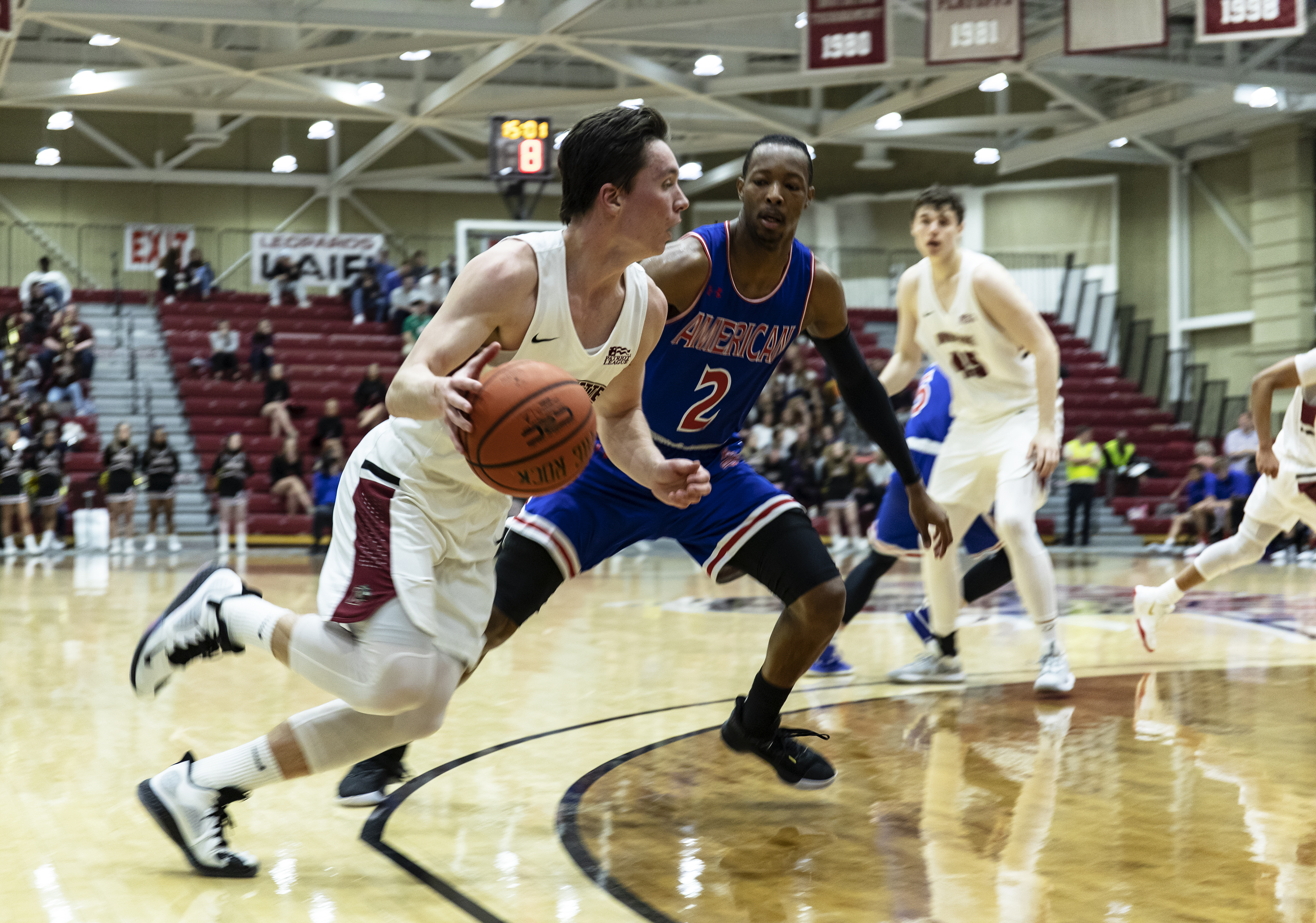 Jaworski leads the team in scoring with 17.6 points per game. (Photo by Elle Cox ’21)

A highlight-reel dunk, a career scoring night, and a 10-point comeback in the final seven minutes were just a few of the dramatic moments from Lafayette’s 82-70 win over American last Saturday.

The Leopards then traveled to Bucknell for another conference matchup on Monday night, and earned their first victory at Sojka Pavilion since February 5th, 2014. Lafayette is now on a four-game winning streak and holds a 7-4 mark in the Patriot League.

Against American, junior guards Justin Jaworski and E.J. Stephens combined for 50 points, with Jaworski notching a career-high 32 points on over 60 percent shooting from the field.

“It felt good scoring 32 against American, but I understand that what’s more important is that we won the game,” Jaworski said. “I just stayed aggressive and my teammates did a great job putting me in positions to score and trusted me to make shots down the stretch.”

Stephens recorded 18 points while going 10-11 from the free-throw line, and added four assists, three rebounds and a steal.

“I think I am having a good season thus far, probably my best one since I’ve been at Lafayette,” Stephens said. “I’m playing with a lot of confidence and [being] very aggressive, which is something I wanted to focus on coming into this year, and I think I’ve done that.”

Two of Stephens’s 18 points were scored in a more spectacular fashion than the rest. Stephens received a pass from freshman forward Leo O’Boyle on the defensive end, dribbled the ball the length of the court, and threw down an emphatic dunk over American’s senior center Mark Gasperini.

“While I was dribbling the ball up the court I couldn’t believe how open I was, it was as if the seas parted for me,” Stephens said. “Once I got in the paint I figured I might as well go for the dunk.  Then after the play I just felt a rush of energy go through my body.  I saw my whole team starting to tap their heads meaning the dunk was ‘on his head’, and that got me even more hyped. It was a great feeling for sure.”

A video of Stephens’ dunk was posted to the Lafayette men’s basketball Instagram page and has over 5700 views.

Despite the standout performance, the Leopards found themselves trailing 61-52 with just over six minutes remaining in the game.

Jaworski cut into the lead with a four-point play after getting fouled on his three point make. He sunk the free throw to bring the Leopards within six.

The four-point play from Jaworski sparked a 30-9 run by the Leopards during the final six-plus minutes of the game. But Jaworski wasn’t finished after his four-point play. He went on to contribute 10 more points, including a three-point dagger from the logo at mid-court with 2:21 remaining in the game to put Lafayette up by five.

Free throws down the stretch by Stephens and senior co-captain Myles Cherry sealed the Lafayette win.

The 32 points by Jaworski not only marked his career-high, but was also the second time he has scored over 30 points this season. He currently leads the team in scoring with 17.6 points per game this year in his best season as a Leopard thus far.

“There’s a few games that we wish we could get back but we’ve just had to learn from those and try to keep getting better every day,” Jaworski said. “[The] regular season is great but we understand whoever is playing the best in March will win the league, and that’s what the goal is.”

Senior forward Lukas Jarrett finished a basket short of a double-double, with 11 rebounds and eight points to go with four blocks and four assists.

“Our guys showed great resiliency and heart in coming back from the double digit deficit in the second half,” head coach Fran O’Hanlon said. “We really turned up our defensive intensity to get back in and eventually overtake a very good American team.”

In the win over Bucknell, the team received contributions from all across the board as the Leopards improved their season record to 15-7.

The Leopards held the Bison to just 8-28 shooting in the first half while building a 40-27 lead heading into the break. A defensive lapse at the start of the second half quickly allowed Bucknell back into the game, and the game was tied at 60 with seven minutes remaining.

A three-pointer by Jaworski and a dunk by Stephens were enough to clinch the victory, as the Lafayette defense kept Bucknell scoreless throughout the last five minutes of the game.

Jaworski finished with 20 points while Stephens totaled 11 points and put the game away with his late dunk with a minute remaining.

After beating Lehigh for the first time since 2015 a few weeks ago, the Leopards get a second shot against the Mountain Hawks tomorrow afternoon.

“Our team feels good going into this Lehigh game,” Stephens said. “We’re riding a hot streak right now and that’s because we’ve been defending at a high level. That’s something we need to continue to focus on.”

Lafayette hosts Lehigh tomorrow at 2 p.m. on Alumni Day at Kirby Sports Center. The game is also a white out affair for the Leopards Lair.