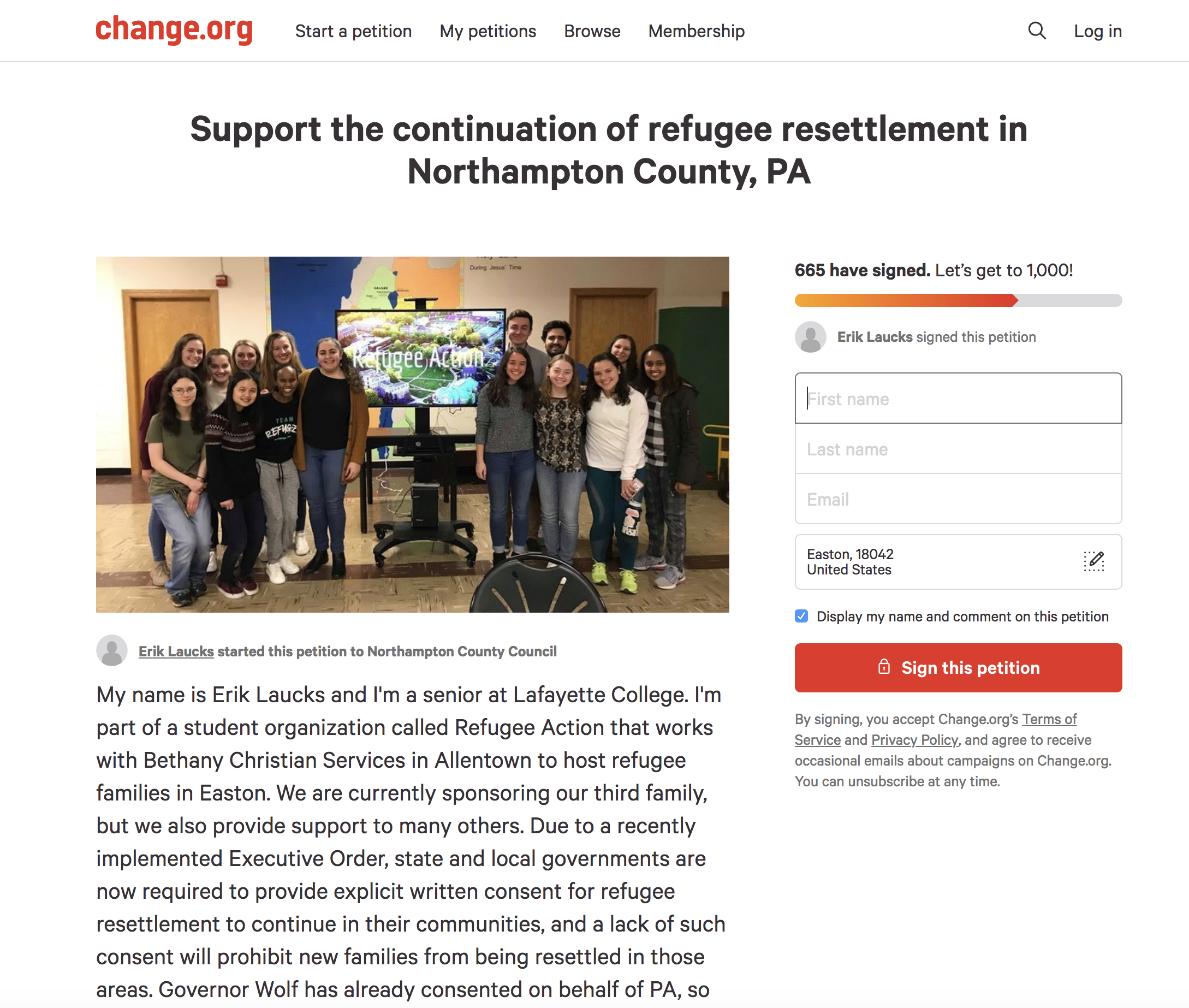 Refugee Action’s petition to protect refugee settlement in Northampton County had over 550 signatures when presented to the county council. (Photo from Change.org)

The Lafayette community came together in support of Refugee Action’s petition on behalf of the resettlement of refugees within Northampton County. In a single afternoon the petition received over 500 signatures.

The petition was a response to an executive order signed by President Donald Trump in Sept. 2019, requiring individual states and localities to submit written consent if they wished to have refugees resettled in their area. Last Fall, Pennsylvania Governor Tom Wolf reaffirmed his commitment to “welcoming refugees” in a letter to President Trump and the United States Secretary of State Mike Pompeo.

Laucks and the organization contacted partners from Lafayette and the greater Easton community in preparation for an appearance before the Council, however, they soon realized that they needed a “mechanism of support for those who could not attend,” Laucks said.

“I started the petition about 24 hours before the council meeting [and] we started spreading it around the Lafayette community as well as around Easton,” Laucks said. “By the time of the meeting, we had garnered over 550 signatures.”

Remy Oktay ’23 helped spread the word and gain signatures for the petition.

“I have always been interested in [Refugee Action] but never had the time to attend the meetings so when I saw this petition going around, and read about how impactful it would be, I thought it was a perfect opportunity to do my part in helping a great cause,” Oktay wrote in an email. “I wrote up a little blurb and sent it along with the link to the petition to all the group chats I was a part of.”

In spite of all this support and the plans of future action with the council, the letter of consent ended up not being necessary.

On Jan. 15, after Refugee Action’s presentation before Northampton County Council, U.S. District Judge Peter Messite temporarily blocked the Trump Administration’s executive order with a preliminary injunction, arguing that states do not legally have the right to veto resettlement orders from the federal government. The Maryland judge concluded that the order did not appear to serve the “overall national interest,” according to Time Magazine.

While the ruling certainly brought relief for Laucks, the senior was “left with a sense of dismay and frustration that it had to be dealt with in the first place. The work of resettlement is constant – it does not stop for the semester, for finals, or for breaks,” Laucks wrote in an email.

“Given that we are currently working with two families, there was plenty of work to be done over the interim, and the executive order required a significant amount of our time that should have been spent working with our families,” he added.

Laucks added that Refugee Action is “incredibly grateful” for the support received from the Lafayette community and the broader Easton community in their efforts to obtain the letter of consent.

“Refugee Action’s resettlement work is necessarily by, of, and through the community, and we are continuously grateful for the backing that we receive to keep doing this work,” he said.