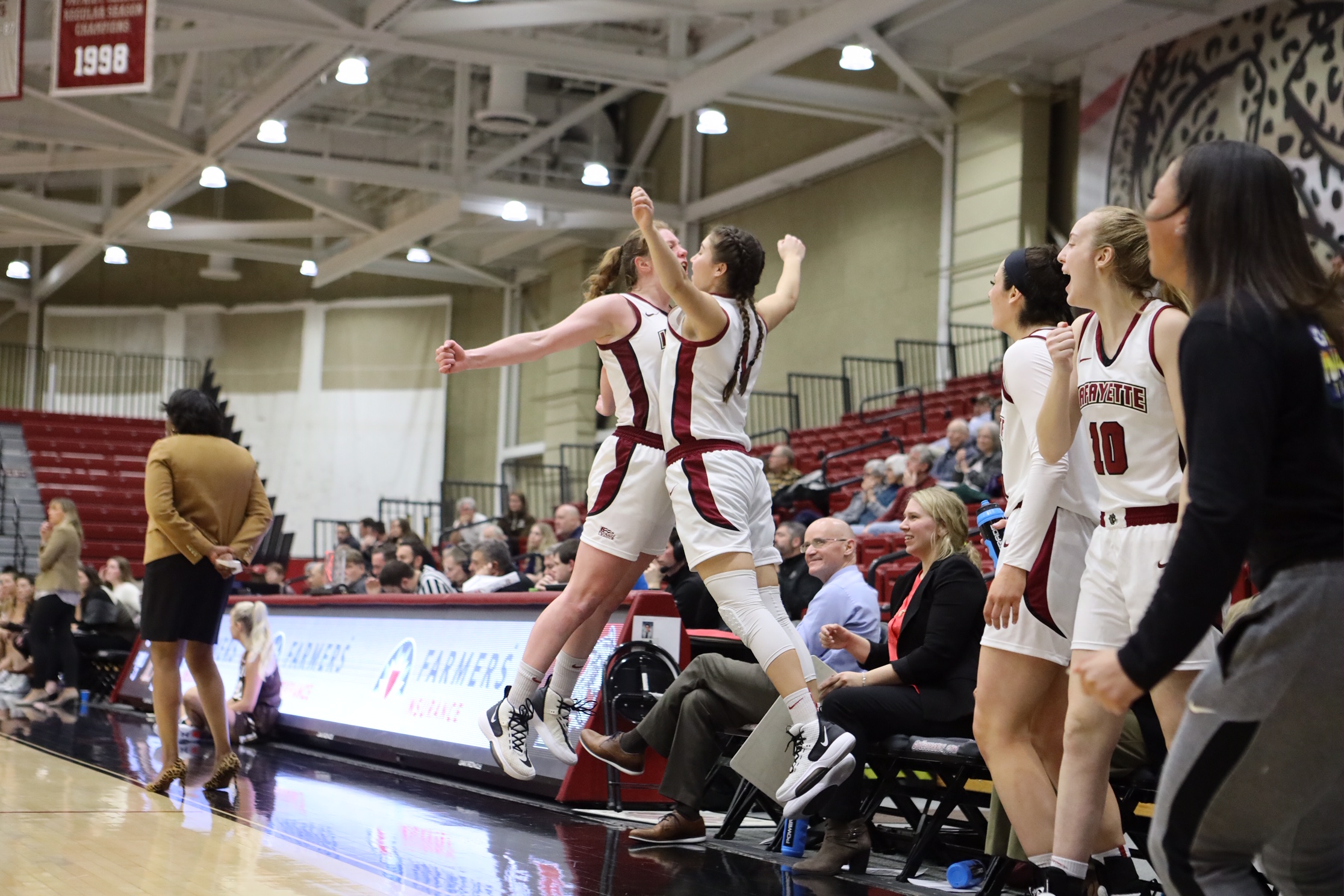 The crowd at Allen P. Kirby Sports Center erupted as senior guard Sarah Agnello calmly sunk a pair of free throws. They were just a formality.

The game was over and for the first time since February 21, 2015, the Lafayette women’s basketball team defeated rival Lehigh.

Players celebrated on the court, and continued in the locker room by dousing head coach Kia Damon-Olson with water from their bottles, with everyone enjoying their first Lafayette-Lehigh victory.

“I’d be lying if I said it didn’t have any other special characteristics to it,” Damon-Olson said. “It had been eight matchups since the last time Lafayette beat Lehigh and to do it here [at home] and do it on alumni day…all of those things together made the win special.”

It was the team’s junior starters leading the charge last Saturday. Guard Drew Freeland, who walked onto the team in 2017, scored a game-high 17 points while only attempting seven field goals on the day. Forward Natalie Kucowski, the nation’s leading rebounder in women’s Division I college hoops, scored 15 points and pulled down 11 rebounds. She also added three steals and four blocks.

Freeland started the Leopards off with a pair of threes, the team’s first six points of the game. But Lafayette fell into an early hole, as the Mountain Hawks finished the first quarter with a commanding 23-13 lead. They’d extend it to 29-15 in the second before the Leopards came roaring back.

“We rely on our defense and trust our defense to get stops, which really started to happen in the second quarter,” Kucowski said.

The Leopards began their run shortly after, bringing the deficit to eight points by the half.

“While it may have felt more of a separation between the two teams, it really was two baskets and two free throws, and we can make that up,” Damon-Olson said. “And that was the message to [the players]. We’re right where we need to be, need to fine tune a couple things and then we’ll be fine.”

Kucowski scored nine straight points spanning the second and third quarters to narrow the deficit to 30-26 just a minute after the halftime break.

“It was definitely the flow of the game,” Kucowski said. “At halftime we talked about coming out strong in the third quarter, both offensively and defensively. We were able to get easy layups in the beginning of the quarter and get out in transition, which gave us a lot of energy right at the beginning of the second half.”

Sophomore guard Nicole Johnson tied the game at 30 with a jumper, capping the 13-0 run for Lafayette. They’d held Lehigh scoreless for over seven minutes straight.

“Our defense fuels our offense in a lot of ways,” Freeland said. “When we’re solid on defense, the shots start falling on offense.”

Lafayette carried a 41-39 lead into the final quarter before the teams traded blows throughout the fourth. Freeland’s go-ahead triple and subsequent jumper kept the Leopards in the game before both teams went cold for a few minutes as the game approached the critical final minute.

Kucowski, who had been playing for several minutes with four fouls, put the Leopards on top for good with a layup with 0:49 to go.

“It’s definitely focusing in and playing disciplined defense, which means not going for blocks or steals, still being aggressive, but making sure I’m not putting myself in questionable situations that could be fouls,” Kucowski said of not fouling out. “Offensively, continuing to have the same mindset of being aggressive and looking to score when we needed to.”

The team made the necessary defensive stops and Johnson and Agnello hit all of their ensuing free throws to seal the win.

Kucowski was honored as the Patriot League Player of the Week for her performance, her third time receiving the award.

“I had no idea I got it, I just went online and it popped up,” she said. “I was surprised. As always, it’s nice to be recognized. The team has been playing well, so I feel like it’s shared among the team. Everyone deserves it, no one person has carried the team. Everyone’s stepping up in their roles and we’re having success that way.”

The team continued their success with another winning effort on Wednesday over the Colgate Raiders. The Leopards’ 55-39 victory was fueled by Johnson and Agnello combining for 25 points and Kucowski pulling down 19 rebounds. Johnson’s 13 points represent a career-high.

Lafayette held Colgate to just 13 points on 4-24 shooting in the first half, opening a 30-13 advantage at halftime.

The team’s 6-3 conference record eclipses their total of just two wins in the Patriot League last season, as the Leopards now sit tied for second place in the conference. The team has won four straight conference games for the first time since the 2013-14 season.

“The combination of the seniors, the juniors, and then what the young kids provide, it’s just blending together at the ideal time,” Damon-Olson said. “We talk a lot about not peaking too early in the season, but you want to start to play your best basketball when you’re getting towards February and March and we’re trending in that way.”

“From a coach’s perspective, I still think we have a lot more in the tank where we can improve and get better, and that’s what we’ll use everyday practice for,” she added.

The team travels to American tomorrow for a Patriot League matchup at 1 p.m.