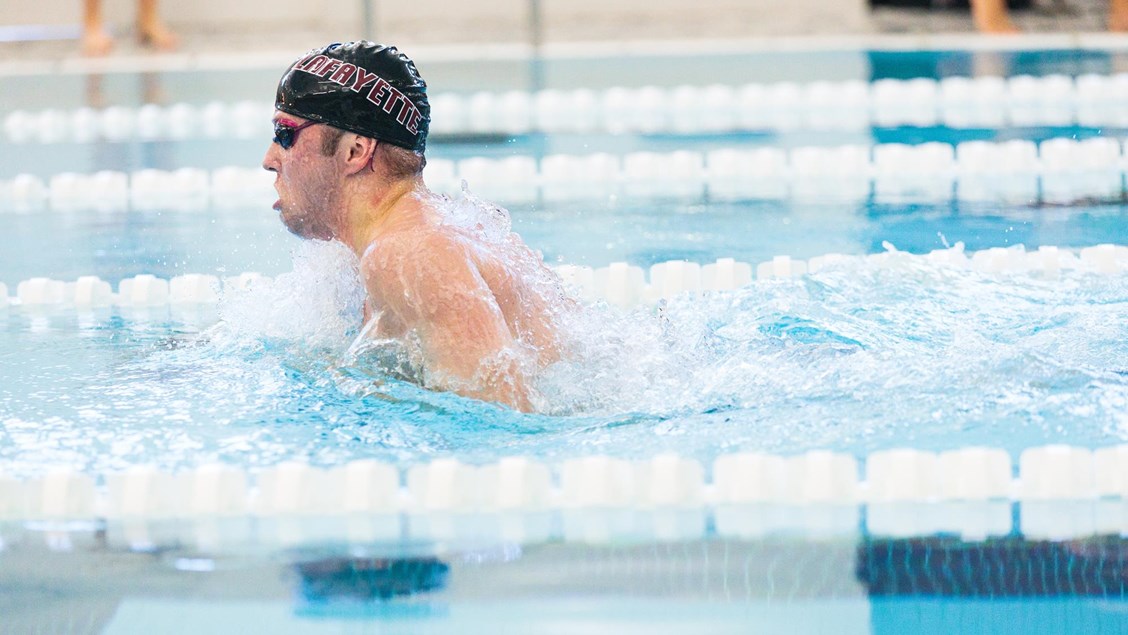 In a postponed meet, the men’s swim and dive defeated Colgate. Both teams will swim again tomorrow at the Navy Invite in Annapolis, Md.(Photo courtesy of Athletic Communications)

The Lafayette swim and dive team faced conference foe Colgate last Saturday in a dual meet, with the men’s team beating Colgate 155-100 while the women’s team fell by a score of 178-119.

For the men, freshman Ethan Keyes shined for the Leopards, winning the 100-yard backstroke with a time of 54.80 and the 200-yard backstroke in 1:59.02. Keyes was also a member of the 400-yard medley relay team, which took first place in the event. Keyes joined forces with junior Tanner McFarland, sophomore Michael Gorgan and freshman Aaron Tupper for the relay.

Freshmen Jamison Crow and Louis Franzone placed first in the 100-yard butterfly and 200-yard freestyle, respectively. Crow won his race in 53.94 seconds while Franzone took home first place in his race with a time of 1:46:61.

For the women, freshmen Sydney Perks won a pair of events in the 1000-yard freestyle (11:07:47) and the 200-yard backstroke (2:12:65). A frequent winner in distance events, Perks has stepped up to the challenge of contributing consistently as a freshman.

“It’s exciting,” she said. “I don’t feel like I contribute anymore than anyone else. I enjoy competing against other schools with my teammates.”

“We’re almost at Patriot [Leagues] so I’m hoping to achieve some personal bests there,” she added. “It’d also be cool to get close to some records. A more ambitious goal for the season is to make [Patriot League] finals.”

The women’s 200-yard freestyle relay took home the final win of the meet, completing the race in 1:43.17. The team was composed of Leininger and Wilson as well as senior Anne Marie Mozrall and freshmen Margaret Champagne.

The Leopards travel to Annapolis, Md., tomorrow for the Navy Invite at 12 p.m.