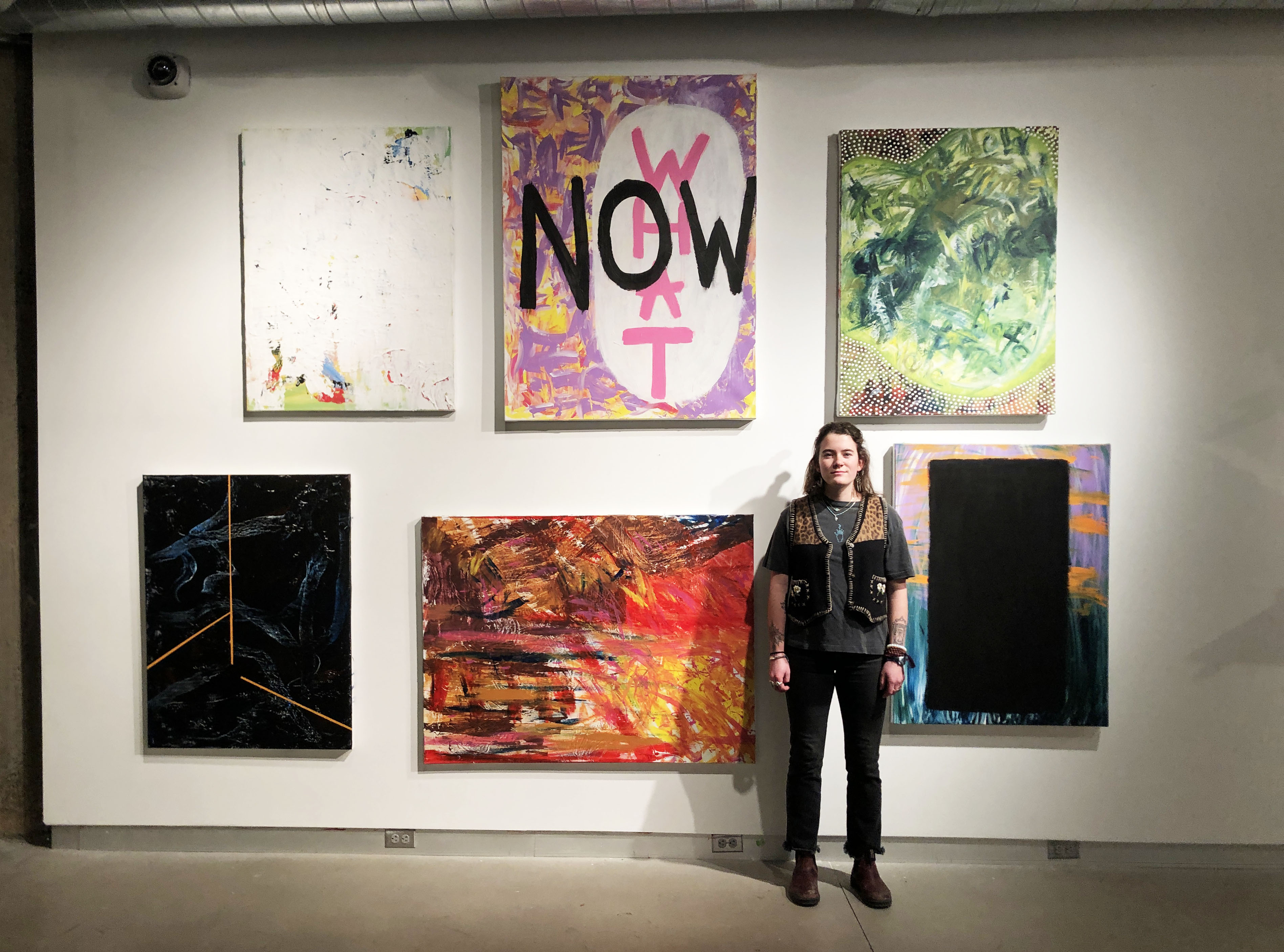 Kaila Aguerre ’20 completed her senior capstone last semester, which was based off of journals from her gap year in Nepal. (Photo courtesy of Alex Vogel ’20)

For Kaila Aguerre ’20, studio art is not just a hobby – it is a form of therapy and source of revival.

Aguerre, who has considered herself an artist her entire life, is now a studio art major at the college. Her preferred medium is acrylic painting on canvas, but she has also recently ventured into photography for inspiration and the “still-life” aspect it provides.

Aguerre took a gap year after high school, during which she had a variety of experiences in Nepal and along the Nay Congo River. However, when she came to Lafayette in 2016, she said she realized that her college experience would look drastically different from her time abroad.

“[During my gap year,] I was living in a monastery for some time, doing a lot of meditation, self-thought… so I came here, and I was getting overwhelmed by college life,” Aguerre said.

She then met art professor Edward Kerns, who encouraged her to embrace painting as a way of dealing with her discomfort.

“He made me realize, ‘Oh, I am an artist…that’s a big thing,'” Aguerre said. “He was the one who really gave me confidence to call myself an artist.”

Since then, Aguerre has relied on art to help bridge the gap between her global and collegiate experiences.

Aguerre completed her senior capstone last semester. This was the first time she displayed her art in a public setting, and her project was based off the journals she kept from her gap year.

“I didn’t really know what I was going to do when I went in. I knew I liked abstract, impressionist-type painting. That’s kind of my vibe…for the kind of person I am, I like to sit in front of a painting and let it consume me,” Aguerre said.

Despite her initial uneasiness, Aguerre knew she wanted to paint her experiences as they were – unromanticized and raw. To achieve that affect, she used texture to convey movement and an emotive sense of herself.

“It’s not pretty…but I think it’s important to kind of sit in the uncomfortable and paint with intense emotions,” Aguerre said.

For Aguerre, sitting in this mindset for hours and facing her impactful experiences through painting is a source of rejuvenation. Her feelings, she said, dictate her movement and use of color.

Aguerre’s art is also a form of therapy for herself because it forces her to be vulnerable. She explained that her spirituality has usually been private, but publicly displaying it in her art has allowed her to be more synchronized with her internal person. In turn, Aguerre has embraced this vulnerability as a way to face intense experiences.

After graduation, Aguerre plans to use her art as a means of activism and inciting change. Specifically, she said she wants to make art as therapeutic for others as it was for her, especially for those in prison and in the context of criminal justice and reform.

While Aguerre is unsure of her future career path, she said she is embracing an open mindset and refuses to stress about it.

“I’m going to find something, and if I don’t like it, I’ll change it. Life goes on,” Aguerre said.