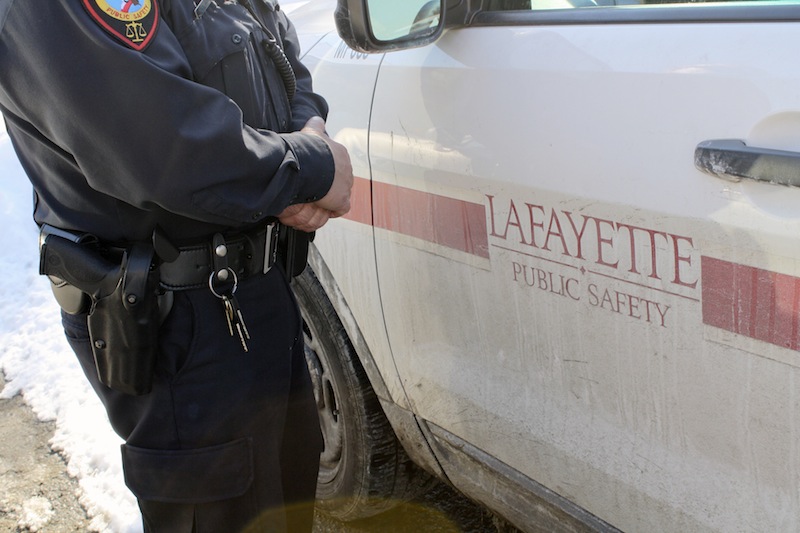 The petition calls for Public Safety officers to be unarmed on campus except in emergencies. (Photo by Elizabeth Lucy ’15)

There were a number of incidents on College Hill, including robbery, assault and a shooting resulting in a shelter-in-place lockdown of Lafayette College in December through winter break that have raised community safety concerns. In response, President Alison Byerly held a meeting with the Easton Police Department, members of Residence Life, Public Safety, Easton Mayor Sal Panto and others this past Wednesday to discuss what the city and campus are doing and can do to better enforce safety for residents and students.

“What President Byerly was hoping with that meeting was to bring together the key players around you know, safety,” said Annette Diorio, Vice President for Campus Life. “Just have a conversation about if we are comfortable with everything we’re doing, are there things out there that we should be thinking about differently. I think it’s a great move on her part and on the city’s part to partner that way.”

Director of Public Safety Jeff Troxell was in attendance at the meeting and added that Public Safety is available to talk to student groups or organizations about security and safety on campus and can invite the Easton Police Department as well.

The first of the incidents occurred on Dec. 11 when two men attacked and injured a member of the Lafayette College community on College Hill with two other incidents occurring within four hours of the assault, according to Lehigh Valley Live. The next morning a red SUV they believed was related to the incident was seized and an arrest was made Vladimir Jesus Morales, 19, on separate charges of a robbery on a pizza delivery person.

“[Lt. Matthew] Gerould said police were investigating what role, if any, Morales played in other crimes in the city, and added that Morales was “associated” with the red SUV and its owner. Gerould would not say Morales was involved in the three incidents on Wednesday or even suspected of being,” according to Lehigh Valley Live.

Troxell said that he does not believe that members of the college were being targeted.

“I just think there were two individuals looking to rob somebody. From what I know that they aren’t targeting the Lafayette community they just happen to be passing through so it could have just as easily happened in New Jersey or Forks Township,” Troxell said.

In an unrelated incident that occurred on Jan. 12, a shelter-in-place lockdown was issued in connection with a shooting incident on West Lafayette Street. The lockdown was lifted after the subjects left the area roughly an hour later. Byerly sent an email to the community the following day describing the details of the incident.

“Easton Police report that two occupants of a crashed car suffered non-life-threatening gunshot wounds, and that the victims may have been specifically targeted by the perpetrators,” Byerly wrote. “We issued the lockdown out of an abundance of caution, not because we believed that there was an imminent danger to anyone on campus.”

Byerly also gave attention to the Dec. 11 assault in her email and said that the Lafayette community is not immune to the threat of violence or criminal activity.

“[The Jan. 12 incident] was something that started in Forks and spilled over onto our property, and the two individuals were targeting each other and an incident happened,” Troxell said. “Although shots fired is a serious event.”

Following both of these incidents, Public Safety worked with the Easton Police Department to set up extra security in the area, according to Troxell. However, once the incidents had been resolved, and the perpetrator was either arrested or confirmed to have left the scene, the number of patrol cars returned to normal, Troxell said.

“We did put some additional patrols on campus, some additional directed patrols too at those locations, Easton did as well. They had some saturated patrols on College Hill,” Troxell said. “With the arrest that was made and the nature of the other incident where it happened and they took off, it’s an isolated one-off kind of incident, it’s not criminal activity targeted at College Hill.”

“Hopefully it’s just coincidental that we’ve had two incidences in two months, but we want to make sure that we’re doing everything we can to promote safety in our community, and I know the city is doing all they can and so it is enough of a topic of concern that we’ll be in conversation with the city about it,” Byerly said.