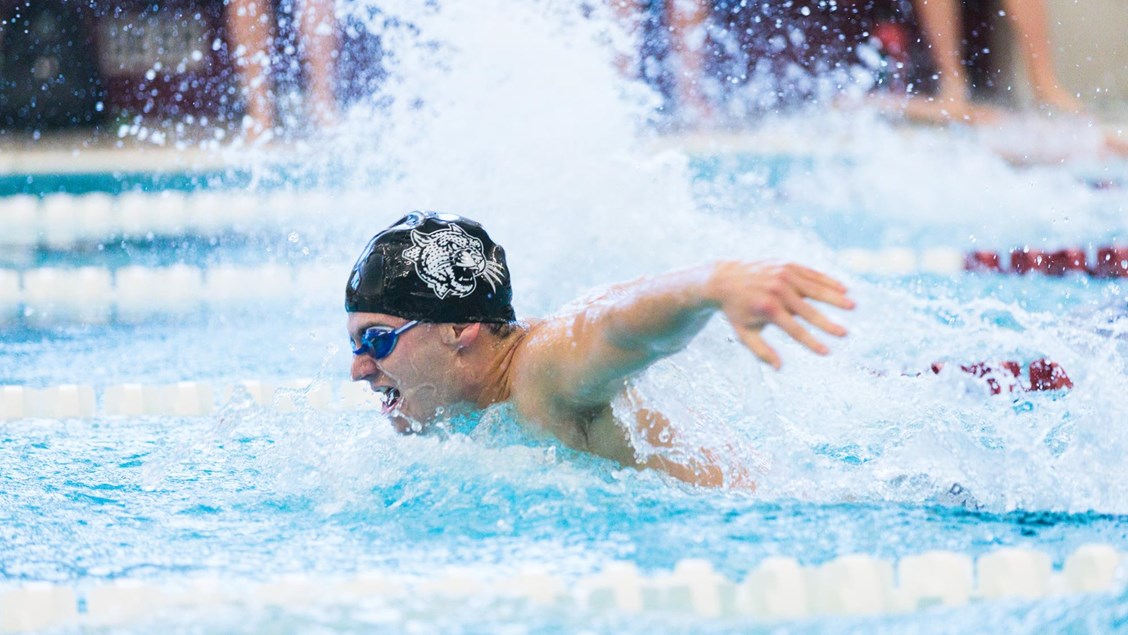 Nine swimmers cemented their names into the Lafayette all time record books in the meet against Lehigh. (Photo courtesy of Athletic Communications)

Four new school records, 15 all time top-10 performances, a sportsmanship award, and one name of a Lafayette swimmer up on the record board in the Jacobs Pool at Lehigh.

The swim and dive team traveled to Bethlehem on November 22nd for their annual dual meet against Lehigh on the eve of The Rivalry game between the two schools. Although the Leopards won just four events, nine swimmers secured spots on the school’s all time top-10 list, with some recording multiple top-10 times across different events.

“They were going in with a mindset of ‘this is a special moment and we need to do extra special things,” said head coach Jim Dailey. “And it’s the perfect timing to do it and it happened to be our rivalry.”

“I’m proud of them, they did really well,” he added.

Lafayette remains one of the only Patriot League swim and dive programs which doesn’t offer scholarships to their student-athletes. Lehigh offers partial scholarships to both their men’s and women’s teams.

For the men, sophomore Michael Gorgan placed first in both the 100 and 200-yard breaststroke, finishing in 56.33 and 2:03.84, respectively. Both times launched Gorgan into third place on Lafayette’s all-time top-10 record list for the events.

“I felt really good,” Gorgan said. “I had won the 100 breast and 200 breast last year, so going into it I hoped that I would keep the same streak.”

With his time in the 100-yard breast, Gorgan broke Lehigh’s pool record by 0.17 seconds and earned a spot on the wall of their natatorium.

“It’s kind of a slap in the face to [Lehigh],” Gorgan said, now the only Lafayette swimmer to hold a current pool record at Lehigh.

“[It’s] exciting that they’re going to have to put up his name in their pool,” freshman Sydney Perks added.

Sophomore Justin Lloyd shattered his own school record in the 1000-yard freestyle, improving his time by 14 seconds and placing second in the event.

“I’ve been doing some extra training with our coach, so that’s helped a lot to get my endurance up,” Lloyd said. “So you put a lot of work in, and you feel really confident going into those meets…you’re ready to show what you’ve been working on.”

Lloyd nearly also broke two more school records in the meet. He placed second in the 500-yard freestyle, missing the record by less than 0.3 seconds, and was just .03 seconds off the all time Lafayette record in the 200-yard freestyle as well.

“I was really close so that was a little disappointing, but I’ll get those [records] later in the season,” Lloyd said.

Freshman Louis Franzone also added his name to the Lafayette top-10 list, and currently sits at eighth all time for the 200-yard freestyle relay.

For the women, Perks broke a nearly 25-year-old record in the 1000-yard freestyle with a time of 10:24.56, good for second in the event. Her time was six seconds faster than the previous record, which was set in 1995.

“The week leading up to the meet I decided that was my goal I was going to shoot for, to try and break the record,” Perks said. “It was a pretty significant drop but I felt like I could do it.”

Perks also finished third in the 200-yard backstroke in 2:06.82, good for third all time at Lafayette in the event. Her performance in the 500-yard freestyle earned her fifth place in the school record books as well, the best time in the event in six years.

The fourth and final school record broken during the meet belonged to freshman Haleigh Marzano, who placed third in the 100-yard individual medley [IM] with a time of 1:01.70.

“I was definitely going for [the record],” Marzano said. “I wouldn’t say that I was expecting it given the circumstances.”

After dealing with tendinitis in her arms and elbows throughout the fall, Marzano was unable to train until about a week and a half before the Lehigh meet. Despite setting the 100 IM record, she said her coaches told her she was “at 50 percent.”

“I was going in not expecting much,” Marzano said. “But I was just going to do my best and see how I could help my team out, and it ended up working out.”

Junior Maya Imperial added two of her own times to the all time top-10 list with her performance in both the 100-yard IM and the 200-yard butterfly.

Sophomore Lauren Lapsley and freshman Lindsey Monaco also both competed in the 200-yard butterfly and cemented their names into the Lafayette record books. Lapsley and Monaco are now sixth and seventh all time in the event, respectively, while Imperial is eighth.

Sophomores Emily Wilson and Danielle Carr also earned spots on the all time list, with Wilson recording the fifth fastest time in school history in the 50-yard freestyle relay, and Carr notching the tenth fastest time in the 100-yard backstroke.

“I think the team really fueled off [the success],” Lloyd said. “Once you see people going fast you think ‘I can go fast too.'”

Senior captain Bryce Currie was honored at the meet with the Bill Lawson Memorial Sportsmanship Award, given to an athlete on each team who best demonstrates values and leadership.

After the holidays, the team will travel to Plantation, Fla., for their annual winter training trip before returning to action on January 14th at St. Peter’s University.